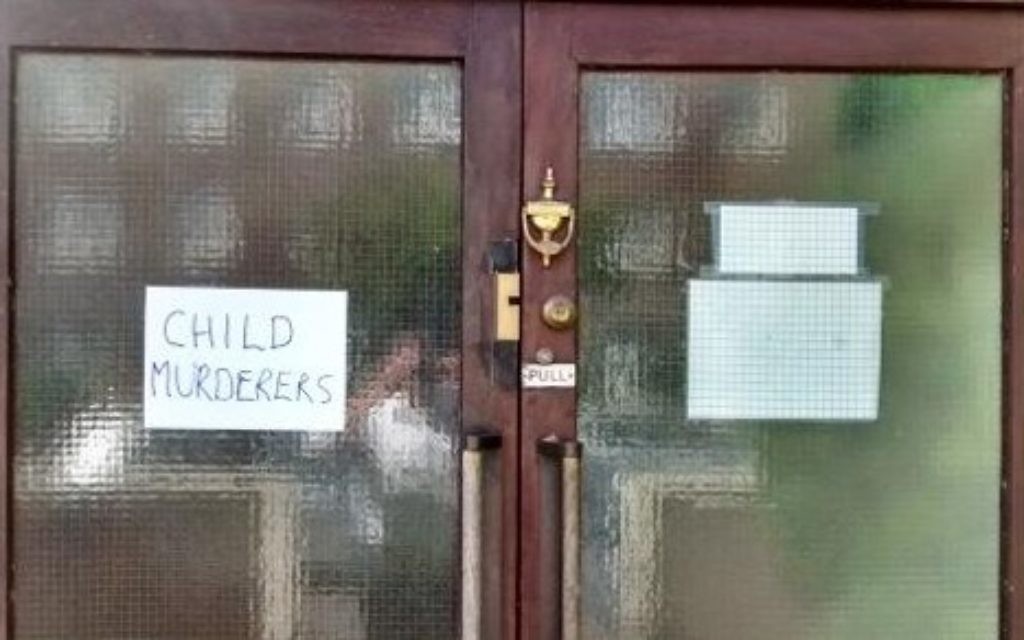 A sign saying 'child murderers' was posted on the doors of Kingston shul.

The CST has reported a total of over 200 anti-Semitic incidents across the UK in the month of July.

The worrying statistic makes last month the second worst the organisation has seen since its records began in 1984. The worst was in January 2009, when 288 incidents were recorded.

The CST’s Director of Communications, Mark Gardner, said in a statement: “Not every July incident relates to the Israel-Hamas conflict, but the majority do.

“The hatred is showing clear trends. Shouting ‘Free Gaza’ on a pro-Palestinian demonstration is not anti-Semitic: but obviously it is when it is yelled at a random Jew in the street, or when daubed on a synagogue wall.

“The same goes for screams of ‘child murderer’, shouted at Jews or pinned on a synagogue (in Kingston, pictured).

Gardner highlighted a recent incident in Bradford, when a Jewish man and woman caught in traffic were approached in their car by a group asking for money for Gaza.

Gardner concluded with a warning about the longer-term impact of the Gaza conflict for Jews.

“Anti-Semitic incidents will subside along with the images on people’s television screens, but the long term damage to Jews of anti-Israel boycotts will persist.

“One consequence of this war will be a lot more boycotts, either through choice or intimidation. Just as Israel is being singled out for scrutiny and boycott, so many Jews are going to feel the same way.”