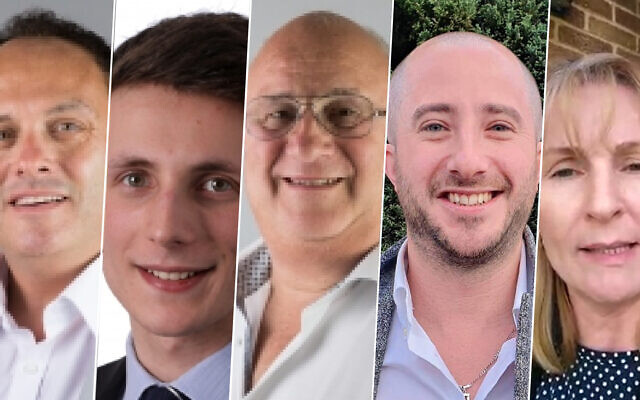 Five Conservative councillors in party chairman Oliver Dowden’s Hertsmere constituency have been formally reprimanded over their involvement in an election smear campaign waged against a Jewish Labour Party candidate.

An investigation led by an independent QC heard how Dr Dan Ozarow, who stood as candidate in the Borehamwood Kenilworth ward by-election in Hertsmere in 2020, was told to “go to the gas chambers”, labelled a “Jew c**t, and told that he “lacked a Jewish soul” in abuse targeted at him across social media.

Two years after his ordeal, which Ozarow said left him feeling “terrorised”, an investigation led by Richard Price QC for Conservative Party Central Office has found the five councillors engaged in negative campaigning, including allegations of antisemitism, along with breaches of the Nolan principals of standards in public life.

In the final stage of the complaints process, Tory Party co-chairman Ben Elliot accepted the recommendations of the panel, which found that councillors Brett Rosehill, who won the by-election, Glenn Briski and Paul Morris were “party to a personal campaign against the claimant in relation to the 2020 by-election, and which continued for many months.”

The report also concluded that “this negative campaigning may well have encouraged others to send antisemitic posts or messages to the complainant.”

None of the five politicians have been accused of making antisemitic remarks themselves. All are understood to have launched appeals against the findings.

Cllr Morris Bright, who is Hertsmere Borough Council Leader and Leader of the Conservative Group, should have “taken steps to rein in the activities of these councillors at an early stage” given that he must “have been aware of the negative campaign activities”, the probe said.

All five have received formal reprimands from Ben Elliot and ordered to attend training seminars organised by the Conservative Party.

It emerged that during the three days preceding the 2020 by-election the Conservative Party delivered a smear letter signed by their candidate Rosehill implying that Ozarow supported terrorist organisations, along with other misleading, untrue and unjustified claims.

National media coverage of the abuse at the time of the by-election centred on a huge digital billboard at Elstree and Borehamwood station which beamed out an image of Ozarow with a headline insinuating that he supported terrorist group Hezbollah.

The billboard is owned by Conservative councillor Cllr Morris and featured a mocked-up headline on a fictitious newspaper called Hertsmere Times in order to make it seem as though it was real news.

Morris’ defence was that he placed the advert in a personal capacity rather than his role as a Conservative councillor and that it had nothing to do with party were dismissed by the panel as “disingenuous.”

The panel also condemned the billboard posting as “unnecessary and vindictive: and a “clear example of negative campaigning in support of Rosehill.”

Conservative Deputy Leader of Elstree and Borehamwood Town Council Sandra Parnell made the unfounded allegation to her social media followers that Dr Ozarow was “the worst antisemite.”

Parnell was later forced to apologise publicly following an out of court settlement, while Cllr Rosehill’s wife had to remove another defamatory remark that she posted on a local Facebook group on election day.

The complaint against councillor Anthony Spencer was dismissed.

On hearing the final conclusions, Ozarow said: “After this two-year investigation, I am delighted that the terror that my family and I went through is finally over and that the Conservative Party has reached this verdict.”

Standing and winning in a 2021 by-election in the same ward, he continued: “No one should have to suffer like my family and I did and it really saddened me to hear Jewish people from other parties telling me that they were too frightened to stand for election because of what happened.

“I would also like to thank my wife for her support. She was eight months pregnant at the time and was put under immense stress and also to my two children with whom I had to sacrifice so much time whilst going through this process.

“Most of all I would like to thank all those who have showed me solidarity, including the Borehamwood community who overwhelmingly rejected the politics of hate and division at the ballot box last year when they elected me to serve them in a landslide vote.”

Hertsmere Conservative Association said it was “deeply concerned” that the investigation’s findings had been published before an appeals process launched by all five individuals had concluded.

It said in a statement: “The named individuals, four out of five of whom are proud members of the Jewish Community are hurt and dismayed, over what are clearly politically motivated claims of antisemitism from Labour.”