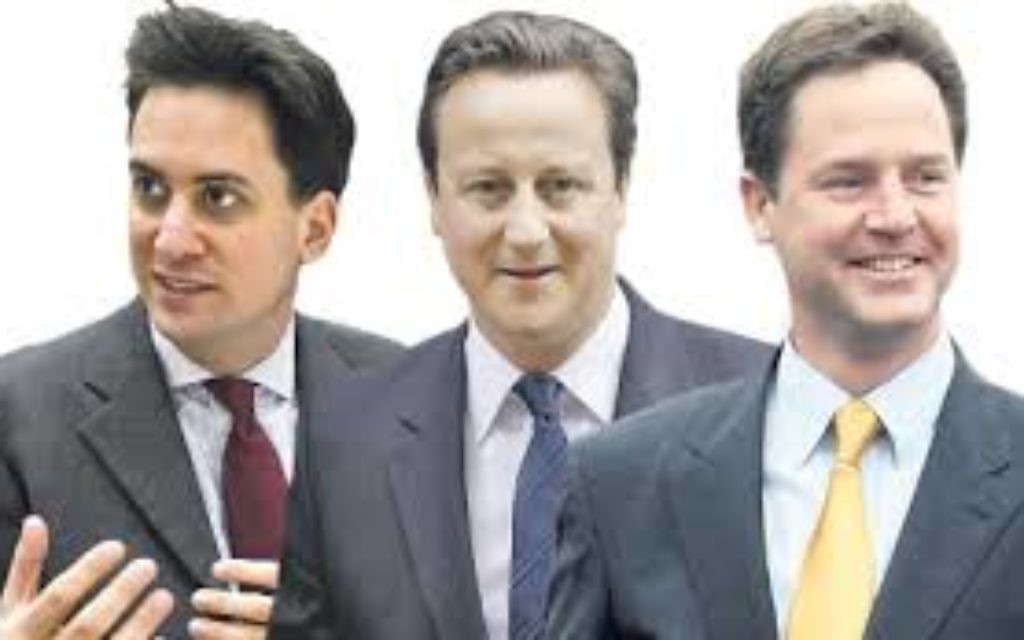 ‘We agree with Maureen’ say 30 percent of Jewish voters now ‘less likely’ to back Labour after Gaza… but it’s not all bad news for Ed’ writes Justin Cohen.

Nearly one third of Jewish voters are less likely to vote Labour following Ed Miliband’s condemnation of Israel’s military operation in Gaza – echoing concerns that led Maureen Lipman to state she would not vote Labour due to the party’s approach to the Jewish state.

Those are the findings of a major poll of more than 1,300 Jewish News readers, which also suggested support for the Tories remains at similar levels to 2010, and pointed to a dramatic collapse in support for the Lib Dems and suspicion of UKIP.

Actress Maureen Lipman has abandoned a lifetime’s support of Labour and announced that she would vote for any other party in protest to Ed Miliband’s support for recognising the Palestinian state.

The poll was distributed by the Board of Deputies, Jewish Leadership Council, UJS, United Synagogue and Progressive movements to ensure a wide cross-section of views.

This snapshot of communal opinion comes exactly six months ahead of the General Election and only days after Lipman, a Labour voter for 50 years, condemned the party leader’s support for the parliamentary motion on recognition of a Palestinian state and his opposition to the IDF’s operation against Hamas this summer.

Asked how Miliband’s condemnation of the military campaign will affect the chances of respondents’ voting Labour on 7 May, 30 percent said they are ‘less likely’ to back Labour – with 54 percent saying his stance made no difference.

Examining overall voting intentions, 48 percent indicated they would back the Tories if Britain went to the polls now, compared to 19 percent for the Opposition, with UKIP the community’s third preference on eight percent – just over half the level of support Nigel Farage’s party is currently polling nationwide.

Support for the Liberal Democrat vote appears to have collapsed to just three percent, marginally behind the Green Party.

However, there is no indication of the extent to which this can be attributed to national factors or Nick Clegg’s condemnation of the Gaza operation and the perception in some quarters that not enough action has been taken against MP David Ward.

Sixteen percent said they were undecided if an election took place tomorrow – exactly the same number registered in a Jewish News poll the week before the 2010 election. But significantly, double that number – a staggering 33 percent – indicated they were yet to “definitely” make up their minds.

Comparisons with the 2010 poll also offer a glimmer of hope for Labour – with four percent more suggesting they are ready to back the party now compared to four-and-a-half years ago. The percentage backing the Tories was the same as 2010.

The poll also offers the first glimpse into Jewish public opinion on UKIP since, in order to save the only euro-sceptic group in the European Parliament, the party joined forces last month with a Polish MEP who whose party leader has stated that Hitler was “probably not aware that Jews were being exterminated”.

The decision to bring him into the group drew strong condemnation from the Board of Deputies while UKIP insisted it strongly rejected any scent of anti-Semitism and insisted many parties in Europe have “odd bedfellows”.

However, just 14 percent accepted that this was a “political necessity” and 42 percent claimed the move had “crossed a red line”. Suggesting the concern among the community goes deeper, however, 44 percent said it proved the party is “extremist”.

The economy is ranked as the first priority for 85 percent of those who responded to this week’s survey, conducted online from Monday to Wednesday. It was followed by the NHS (57 percent), Israel (51 percent), education (49 percent) and Europe (40 percent).

Immigration, one of the top concerns in national polls, is ranked in seventh place, below taxation and tackling anti-Semitism but above housing and benefits.

When it comes to Israel, 56 percent view a party leaders’ views on the Israeli-Palestinian conflict as being ‘a large factor’ on their General Election vote – the same as view their Westminster candidate’s views as such. A third saw this as a ‘small factor’ while 11 percent said it wasn’t a factor at all.

Of those quizzed, 46 counted themselves secular or Reform/ Progressive, 34 percent Traditional and 19 Orthodox or Charedi.

The survey revealed significant differences between the positions of voters of different religious affiliations. Some 63 percent of those identifying themselves as Orthodox said they would back the Tories compared to 11 percent for Labour. This compares to 36 and 29 percent among Reform/Progressive respondents. For UKIP the figures were 10 percent to four and one compared to seven for Lib Dems.

Responding to the Jewish News poll, a UKIP spokesman said: “Given that UKIP support among the Jewish community across the board was a fraction of four percent in 2010 it is clear we are slowly gaining the confidence of that community. “That being said, we have much to do to prove we are a reasonable choice for British Jews.