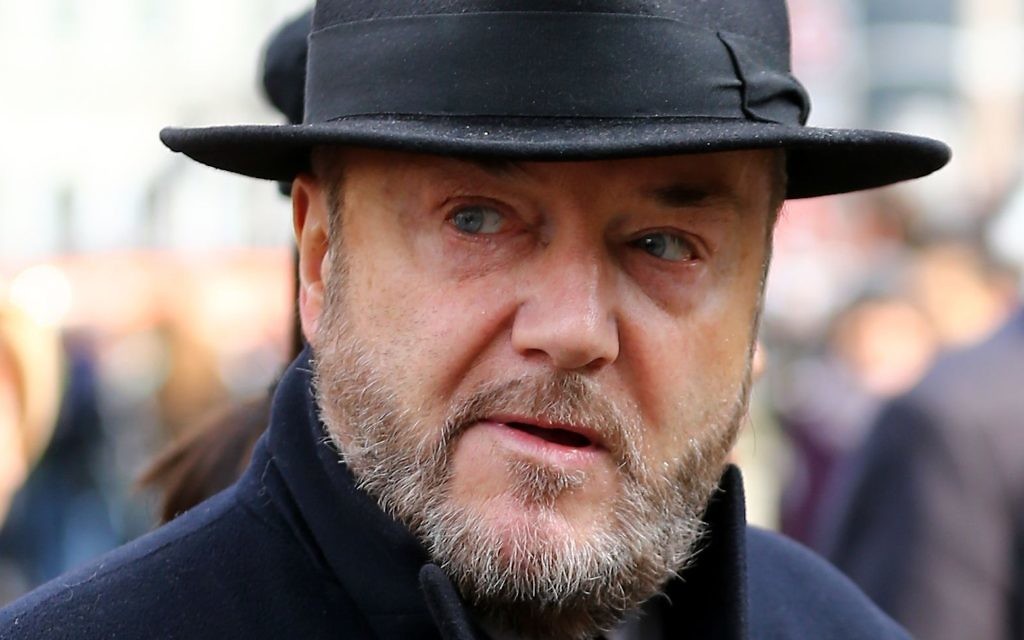 I was in the audience for last Thursday’s Question Time in Finchley – where George Galloway, scourge of the Jewish community, was the panel’s star turn.

I cannot agree with those who thought it an outrageous provocation by the BBC to have invited him to a venue in an area with a large Jewish population. On the contrary, it offered an opportunity to hold him to account in front of an audience of millions.

It was also undoubtedly a mistake to have complained to the BBC, for complaints should be reserved for serious breaches of impartiality, of which there are many. Otherwise, they risk not being taken seriously.

The question of relevance to Jews was asked by Gabriel Rosen, a kippa-wearing young man, who asked “why anti-Semitism is rising in the UK, and does one member of the panel bear some responsibility for it?”

Jonathan Freedland, the Guardian’s executive editor kicked off from the panel, saying that there is always a correlation between an upsurge in violence in the Middle East (meaning Israel) and anti-Semitic activity in the UK and that it is problematic that Jews here should suffer because of the policies of a country thousands of miles away.

He then said that Jews are fearful of a tiny minority of individuals, careful to avoid any implication of the Muslim community as a whole, in true politically correct mode. It was good, however, that he mentioned Galloway’s promotion of conspiracy theories such as Israel being implicated in recent troubles in Ukraine and allying itself with Al Quaida in the dropping of chemical weapons in Syria, and the contribution that such outlandish statements make to Jew hatred.

When David Dimbleby turned to Galloway to respond, all hell broke loose from the audience.

There were shouts of “You’re not welcome here”, “Disgusting” and “You supported Hezbollah”, mainly from a few young Jewish members of the audience. It took all of Dimbleby’s skilsl to restore a semblance of order and to try to restrain people from continuously heckling.

The result was that Galloway, ever the consummate parliamentarian, was quick to turn the situation to his advantage. He claimed victim status, likening himself to Daniel in the lion’s den.

He then turned to the familiar tactic of proving he is no anti-Semite by first shedding crocodile tears over the Holocaust as the worst crime in history| before lashing out at Israel’s “crimes” of the “mass murder of 2,136 Palestinians in a prison camp called Gaza”, then claiming that “Islamophobic attacks on Muslims in Britain are many times more than fascistic attacks on Jews”.

He said: “Zionism and Israel are different things from Judaism and Jewishness and anybody confusing these two things is making a grave mistake”. In other words, it’s fine and even commendable to hate Israel. Unfortunately, the unseemly behaviour of those few audience members who refused to cease their loud heckling meant that time was lost when others, like myself, were unable to make the points which would have shown Galloway for what he is.

I would have nailed the lie that Zionism has nothing to do with Judaism. Zion is mentioned in the Bible 154 times and it is profoundly anti- Semitic to deny uniquely the Jewish people the right to their nation state, which pre-dated most others in history.

I would have said that the Romans tried to obliterate the Jewish connection to Judea and Samaria 2,000 years ago after their conquest, re-naming it ‘Palestina’, but the irony is that during that time Jews were told “go back to Palestine”, but now that they have they are being told to get out of Palestine by the Galloways of this world.

It should have been hammered home that the obsessive and compulsive criticism of Israel for the crime of defending her citizens as a last resort and the singling out of Israel as uniquely bad has become acceptable anti-Semitism.

No one said that, far from distancing ourselves from Israel’s “behaviour” so that we should be accepted as “good Jews”, we should stand by her because she is right, just as beleaguered Czechoslovakia was right in 1939. Galloway should have been challenged for calling Bradford an “Israel-free zone”, just as it would be if Jews, unimaginably, were to demand that Golders Green be Pakistani free. The Jewish hotheads in the audience lost the argument for British Jewry when it could so easily have been won.

Their unbecoming conduct was an embarrassment. They need to learn that unless called to speak, a dignified silence is more effective than yelling, and that in a good debate it is the laser-precision of carefully chosen words in a structured argument that destroys an opponent and wins the day.