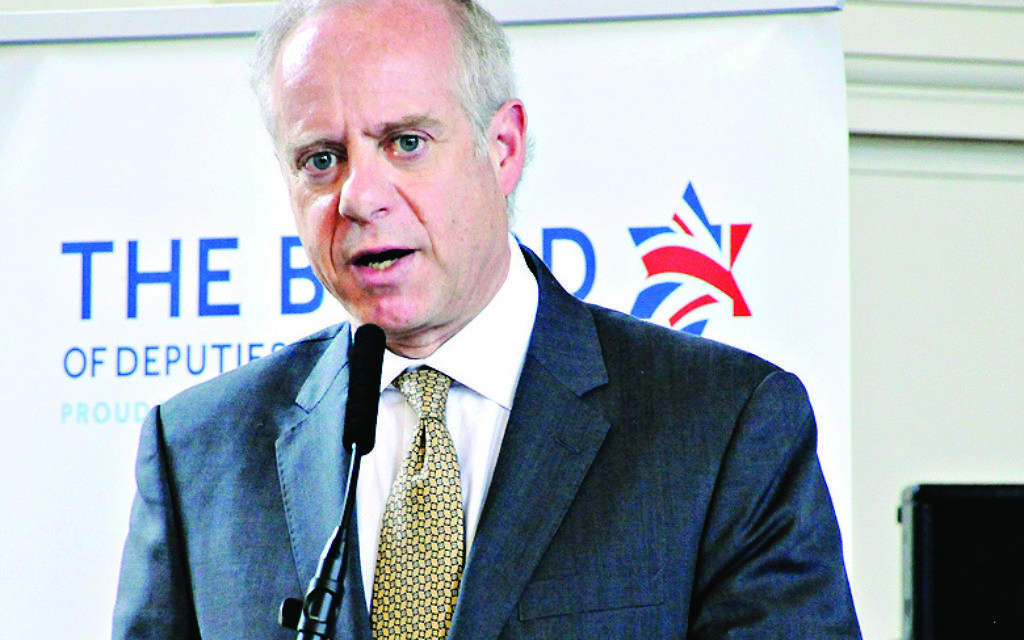 Jonathan Arkush, former President of the Board of Deputies

Last Summer the normally undemonstrative British Jewish community delivered a stinging rebuke to its elected representative body, The Board of Deputies of British Jews.

It was not perceived to be robust enough in defending Israel against the open hostility expressed against it in the media and on the streets of London during the defensive Gaza conflict or in countering the anti Semitism that flowed from it.

The Board’s honorary officers were booed at emergency meetings and outside the Royal Courts of Justice, and new grassroots  organisations  such as the Campaign Against Anti Semitism were formed,  bypassing the Board.

This was the culmination of trendy, ill conceived initiatives foisted onto the Board’s rank and file , often without prior consultation, by the honorary officers.

They were divisive and counter productive, most prominent amongst them being the 6 month Oxfam tie up with the Board in a project to fight world hunger.

I lost count of the number of people who expressed their anger to me for Board’s collaboration with what they perceived to be an anti-Israeli organization.

The Board’s leaders forgot that Anglo Jewry loves Israel, a support which  extends across the denominations.

British Jews want to support Israel wholeheartedly, not be “critical friends” to use the latest buzzword of the unrepresentative fringe lefty groups which falsely claim to represent the ‘silent majority’.

The results of the strongly contested election of the Board’s President for the new triennium last week reflected these sentiments.

The Presidential candidates,  Jonathan Arkush, Alex Brummer and Laura Marks were all currently Vice Presidents, with only Jonathan having served the full six years following 24 years as a Deputy, totalling 30 years, by far the longest serving of the 3 candidates.

Alex Brummer, city editor of the Daily Mail and a United Synagogue Deputy declared first and his campaign was run with a single minded efficiency.

Jonathan, a barrister and also a United Synagogue Deputy declared in February and he always seemed very relaxed about his campaign.

Finally, Laura Marks, a Reform Judaism Deputy, having earlier declined to go for the top job citing family commitments, surprised everyone by reversing her decision just 4 weeks before the election and announced she would be standing, because she was “inundated by people asking me to stand”.

We all realised that her powerful backers on the Board had done their sums and told her that she would win.

That change of mind and her ill conceived decision to join the United Synagogue as a member  whilst remaining the Reform Movement’s Deputy were challenged repeatedly at the four hustings, but her defence of her position remained unconvincing.

I supported Jonathan because I admired his integrity as the only HO to vote against the recent inclusion of a very controversial fringe group on the Board and because he worked tirelessly to counter anti Semitism, BDS etc and generally defend the community.

I thought it likely that Alex, with his easy charm and much vaunted connections to those at the highest level of government and the media, would win the day.

I was wrong and Jonathan’s election by a substantial majority was greeted with delight and some surprise with hearty cheering.

Six candidates stood for the three Vice President slots, one of whom was myself.

I correctly predicted that the young , popular Limmud Deputy, Richard Verber, would become the senior VP, which he did by a landslide.

My platform was as a first priority to address the widespread anti-Semitism masquerading as anti-Zionism.

To do that we need to negate the increasingly pervasive lie that Israel is a colonial enterprise, dispossessing the indigenous people from their homeland.

I proposed setting up dedicated advocacy groups within  the Board drawing on its widespread talent, to address campuses, Jewish groups, the media and government as to Jewish rights to the land of Israel under contemporary International law  and how to respond in social and print media to hostile propaganda, because the standard pro Israel advocacy with its familiar clichés and empty platitudes is not working.

I have expertise in this field in which I have been active for many years.

The voting system used in Board elections is by STV, the single transferable vote.

Although I came third in the first preference votes, I narrowly missed being elected on the third round, but I’m pleased that standing for election has focused on important issues as to how the community should defend itself.

It is also essential for the incoming leaders to understand that we must not act as a political pressure group upon Israel’s democratically elected populace but that our role is simply to support Israel’s security, standing and well being.

I wish the new Board’s HOs every success in facing the challenges ahead.

Let’s hope that they have learned the lessons from the recent past.

Comments for this article have now been suspended 27/05/2015