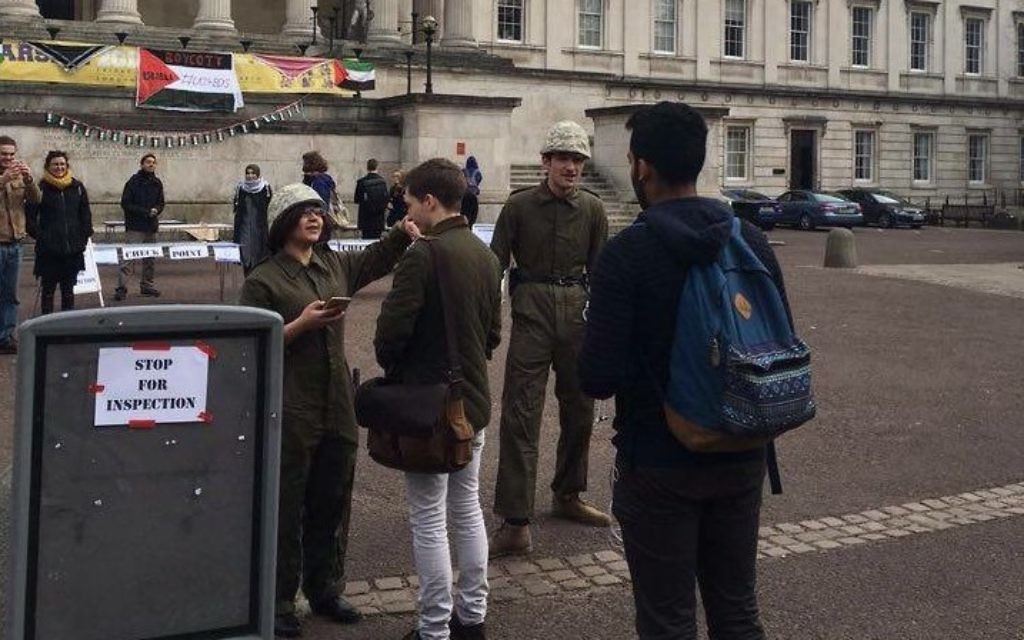 The fake checkpoints erected on campus

The University College London Union has voted to boycott Israel, just hours after a series of terror attacks left one dead and many injured across the country, writes Justin Cohen.

Officers voted 14-4 for the motion which mandates the union to join the boycott, divestment and sanctions campaign.

The fake checkpoints erected on campus

The vote followed a day in which the Friends of Palestine Society organised fake checkpoints at the university, manned by students dressed as Israeli soldiers, as part of what it called the ‘Palestinian Experience’.

Ariel Tamman, co-president of the Friends of Israel Society, said anti-Israel activity had become more “invasive” on campus and claimed the latest move would leave supporters of Israel on campus feeling “intimidated”. “It may lead to less Jewish students coming to UCL,” he told the Jewish News, saying his group would be writing to the university authorities over both the motion’s impact and the way the process was conducted.

Tamman claimed he had only become aware of the motion a few hours before it was debated, saying it had only been mentioned on the union’s website and no effort been made to flag it more prominently.

A proposal to consider the motion in a larger student forum was rejected, as was an amendment to strike out a boycott from the motion, he claimed. Tamman said it appeared many officers “had already made up their minds”.

The UCLU Friends of Palestine Society tweeted: “BDS is now official policy in the UCL Union. This is a tremendous victory for BDS at our campus. Well done to our BDS team for passing the motion.”

When a former president of the UCL Jewish Society, Elliot Miller said the Palestine Society of “intimidates Jews all day then celebrates BDS”, one member replied: “If our existence intimidates Zionists* on campus then that’s their problem.”

A petition has been started, calling on the UCLU to debate the BDS policy in a General Assembly so more students can get involved and debate the issue.

A statement by the Pinsker Centre for Zionist Education, which was recently set up to try and transform pro-Israel discourse on campus, called the decision a “slap in the face” for students who believe in “liberal tolerance and freedom of expression”.

The decision is “the latest example of an extreme minority cynically manipulating the corrupt aspects of student democracy in order to pass policies which do not represent majority-student opinion.”

Student Liora Cadranel wrote on Facebook: “Today on campus students were invited to a virtual ‘Palestinian experience’. Needless to say, that was not the stabbings of innocent civilians. BDS is not about peace but is a hate-filled strategy. For those of us who truly care about Israeli and Palestinian lives it is time to think about new strategies which will stop the hate, stop the killing and bring peace.”

University College London, which is independent from UCLU ” told Jewish News “UCL is opposed to any policy of boycott, divestment and sanctions of Israel.”

“This motion was voted on by only 21 people, a process that is completely undemocratic and unrepresentative. BDS is too divisive an issue to be decided by such a small and unrepresentative body, and a decision like this should have been put to an all-student vote.”

Langer added that it was ‘absurd’ that neither UCL J-Soc and UCL Friends of Israel society were not consulted. He said “this meant that no opposition to the motion could be raised.”

“This not only demonstrates the willingness of the wider UCL student body to reject BDS but serves to show the unrepresentative nature of the Union Council decision.”

Arieh Kovler of the Fair Play Campaign, said: ‘It’s astonishing that the UCL Union would pass a motion so full of hate”, adding that it turned the union “into a boycott-Israel organisation”.

He added the motion ‘troubling’ because it includes a “clause that all Sabbatical officers must ‘respect and uphold’ the boycott”, ‘effectively barring’ Jewish students from running for those roles.