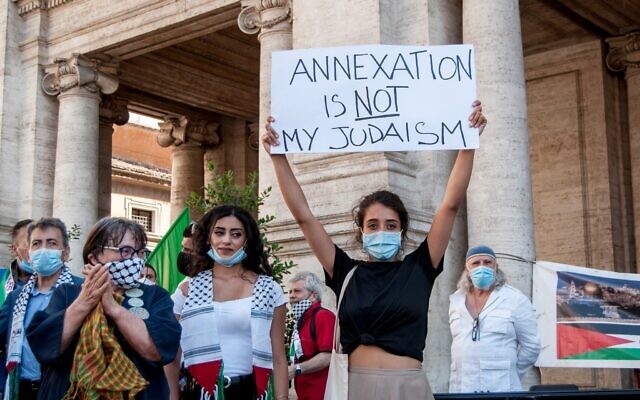 Rome. A national day of mobilisation against the Israeli annexation and for the recognition of Palestine was held in Rome on Sunday. (Photo by Patrizia Cortellessa/Pacific Press/Sipa USA)

More than 100 of the world’s most senior Jewish lawyers and judges have called on Israel to “follow the path of the law” and end plans to annex land earmarked for a future Palestinian state.

They said the land Israel planned to annex was occupied under international law, and that occupation does not confer sovereignty.

“Annexation would fundamentally breach a central prohibition under international law of acquiring territory pursuant to the threat or use of force,” they said. “Such an act would also run contrary to other principles of international law [and] undermine the right of the Palestinian people to self-determination.”

Annexing land would “implicate Israel in violations of international humanitarian and human rights law, expose it to new and grave dangers under international law and implicate its international responsibility for unlawful actions,” they argued.

“It would cause significant measures to be taken by other states [and] give rise to the risk of liability for individuals who participate in the decision,” they said. “We call upon you to follow the path of the law [and] desist from any purported annexation.”

The unprecedented list includes Jewish legal scholars, practitioners and jurists from countries such as the United States, South Africa, Israel, Australia and Canada, including the heads of some of the world’s most prestigious law schools.

Prof Sands said the unilateral annexation of West Bank territory would be “a grave breach of international law” which would have “the most serious consequences” for both individuals, Israel and the rule of law. “It offers insecurity, instability and lawlessness, the very opposite of what its proponents intend.”

Far from representing a raft of Israel critics, signatories said they were “committed to the right of Israel to exist and to flourish, and to live in security without armed threats to its people, like any other state under the rule of international law”.

They added that “where Israel’s sovereignty is threatened through violent attacks, we recognise its right to defend itself within the limits prescribed by international law”.

Judge Dennis Davis, president of the Competition Appeals Court and Professor of Law at the University of the Witwatersrand in South Africa, said he signed the “because I desperately want to see peace” between Israel and the Palestinians.

“Annexation removes any such possibility,” he said. “It explodes the hope, however remote it might be.”

Among the groups helping to coordinate the initiative was London-based Jewish group Yachad, whose director Hannah Weisfeld said the legal experts’ thoughts proved that annexation would be “a complete violation of international law”.

She said: “This letter is another evidence to the mounting opposition to annexation within the British Jewish community, a community that is overwhelmingly supportive of Israel’s right to exist and flourish but is also opposed to Israel’s plan to illegally and unilaterally annex West Bank territory.”