Harry Spiro was nine-years-old when war broke out in 1939, living in Piotrkow, in Poland, with his parents and younger sister, Gita. “We heard how Jews were being treated in Germany,” he told Jewish News, “but in the first weeks after the Germans invaded, nothing really happened. And then they established a ghetto, the first in Poland, and everything changed.”

But Harry — like fellow Piotrkow resident Sir Ben Helfgott and Janek Goldberger, from the Polish town of Bielsko Biala — survived. After six years of indescribable persecution the three men were fortunate enough to become members of a close-knit group of young orphans, known as The Boys, brought to Britain by the Central British Fund [the forerunner of World Jewish Relief] in August 1945.

After landing first in Carlisle, the group, ranging from young teens to those in their early 20s, were sent initially to Windermere in the Lake District.

That is well-known. What is less well-known is what happened to The Boys when they left Windermere. On Sunday, the families of many of the Boys who were sent to Loughton, Essex, joined in celebration of their survival, and an emotional reunion organised by the 45 Aid Society.

The Loughton Boys were sent to a gloriously green estate called Holmehurst, staying for just over two years in a 19th century mansion close to Epping Forest. Twenty-six of the Windermere Boys went to Holmehurst, and each of the three survivors who took part in Sunday’s warm and welcoming event remembered their time there with great affection. 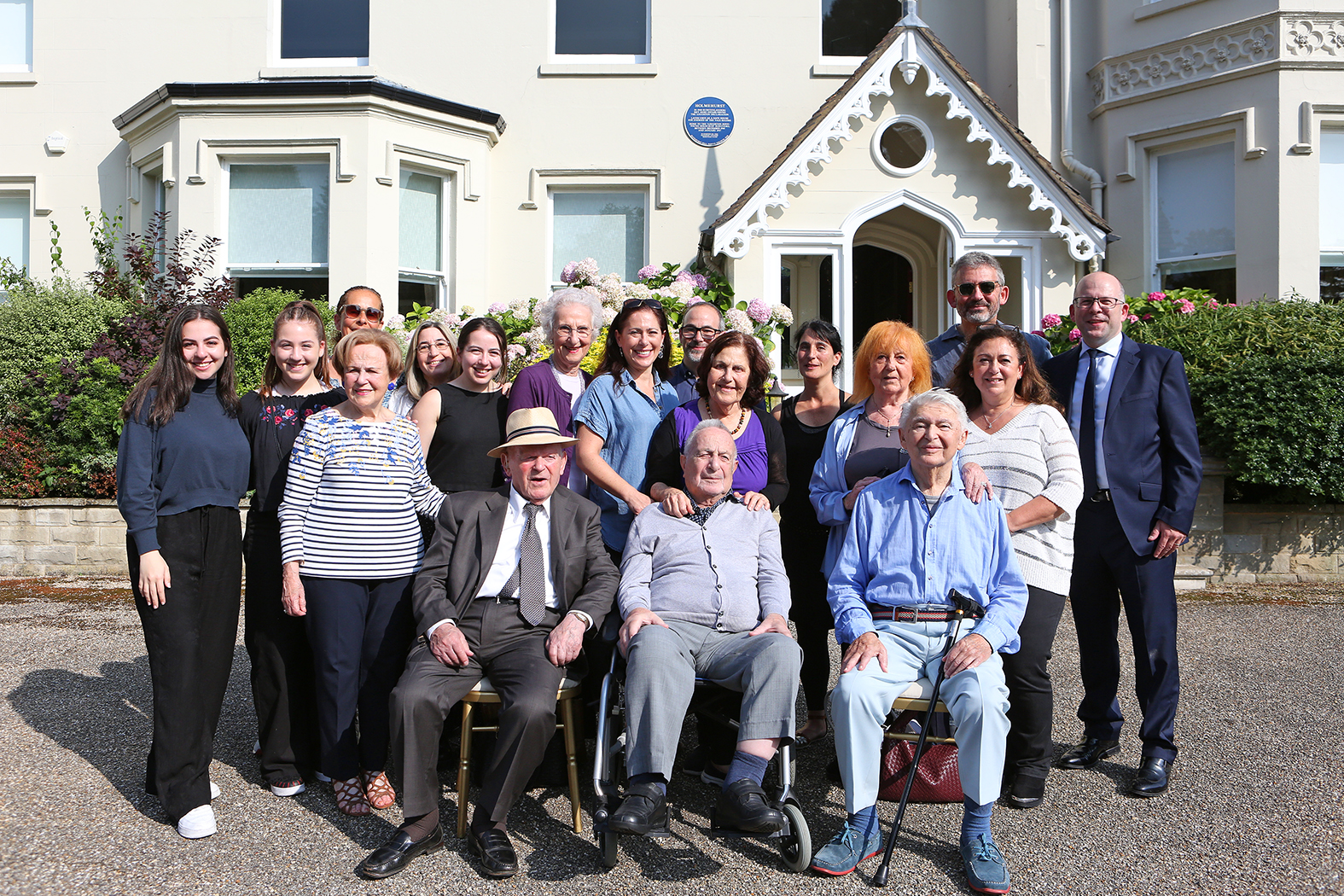 (l to r) Sir Ben Helfgott, Jan Goldberger and Harry Spiro with their families outside the front of Holmehurst, showing the blue plaque that has been installed on the wall behind them to denote when 26 of the Boys lived there for over a year in 1946. (credit: Melissa Page)

Maurice Helfgott, one of Sir Ben’s sons, said: “About 12 years ago my parents were in the neighbourhood and my father decided to knock on the door of Holmehurst.”

He told the owners that he had once lived there. Wendy and Richard Higgins welcomed the couple in, listened to Sir Ben’s stories of his time there, and promptly invited them to return for a grand afternoon tea — with a number of other survivors and their families.

So began a close connection between the Holmehurst present owners and the 45 Aid Society, which culminated in a unique two-centre event.

Working closely with the 45 Aid Society, the Epping Forest District Museum marked its re-opening after lockdown with an in-depth exhibition about the Boys and their time in the area.

The exhibition, featuring objects from the Imperial War Museum and the Jewish Museum, was “hugely popular” in the wider community, according to one of the Epping volunteers. The 45 Aid Society helped the museum secure a grant from the National Lottery Heritage Fund in order to stage the exhibition. And all the security and local administration on Sunday was provided by a team of ex-police officers. 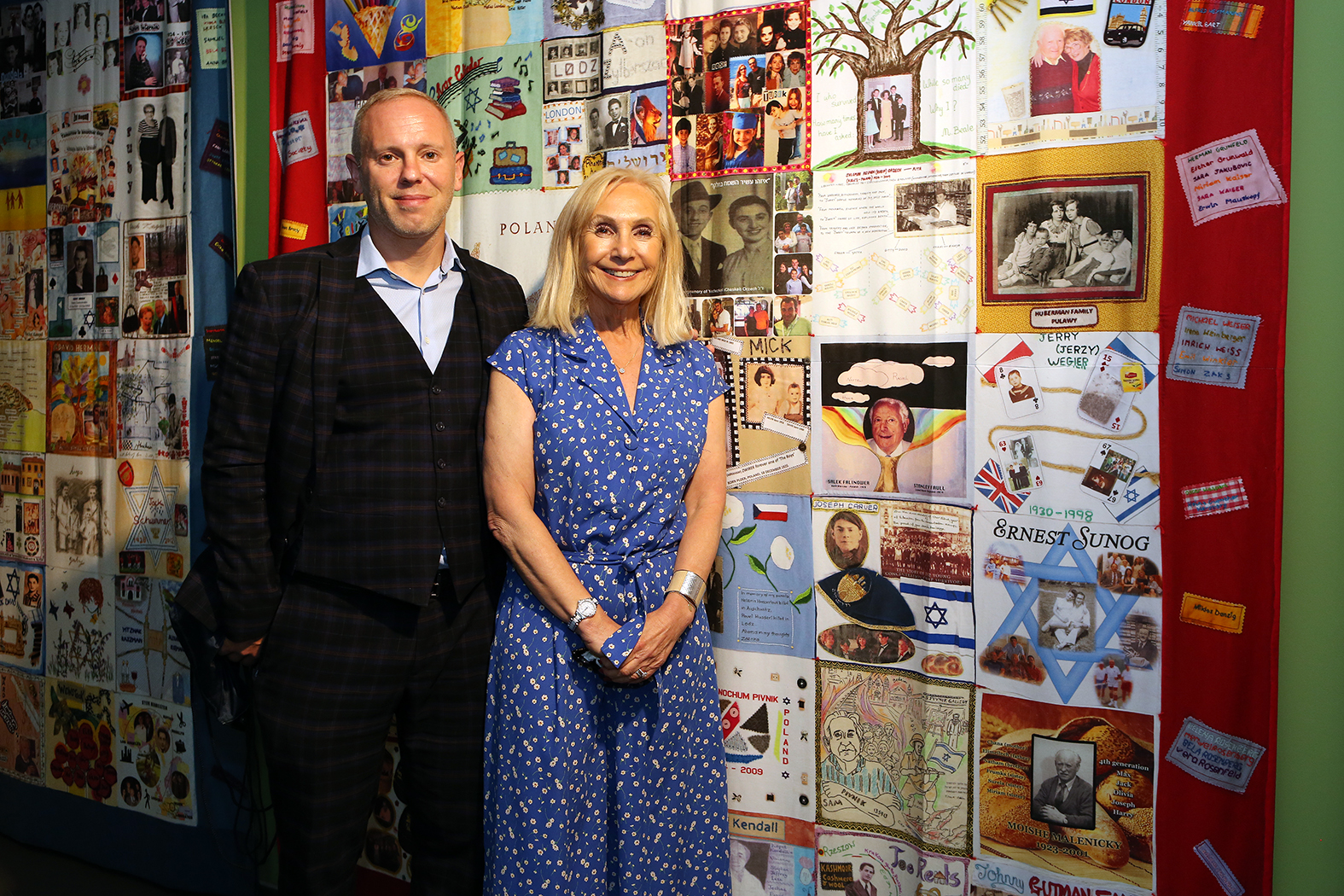 After a visit to the museum the nearly 100-strong group moved on to Holmehurst itself, to be greeted by Wendy and Richard Higgins and a raft of civic and local figures, including the Lord Lieutenant of Essex and local MP Dame Eleanor Laing. A Blue Plaque on the front of the house now marks its unique history, including the stay of the Boys from December 1945 to mid-1947.

Harry Spiro walked in and remembered playing table tennis in one of the reception rooms. Wendy Higgins said that one of the Boys, at that afternoon tea 12 years ago, had “recognised a tree where he had had his first kiss”.

Upstairs, the Boys had shared bedrooms, four to a room, but “complete luxury” compared to the conditions in which they had lived during the war.

Jan, once Janek, Goldberger, the oldest of the three surviving Loughton Boys, is a feisty 94 who recalled with a tear the night war broke out. “There was bombing in Krakow and so we — my parents, my two older brothers and my younger sister — tried to get on the very last train out of town. My grandparents came, too, but they just couldn’t make it. The Germans caught up with us and said, well, you can all go home now.” He spread his hands in eloquent dismissal. 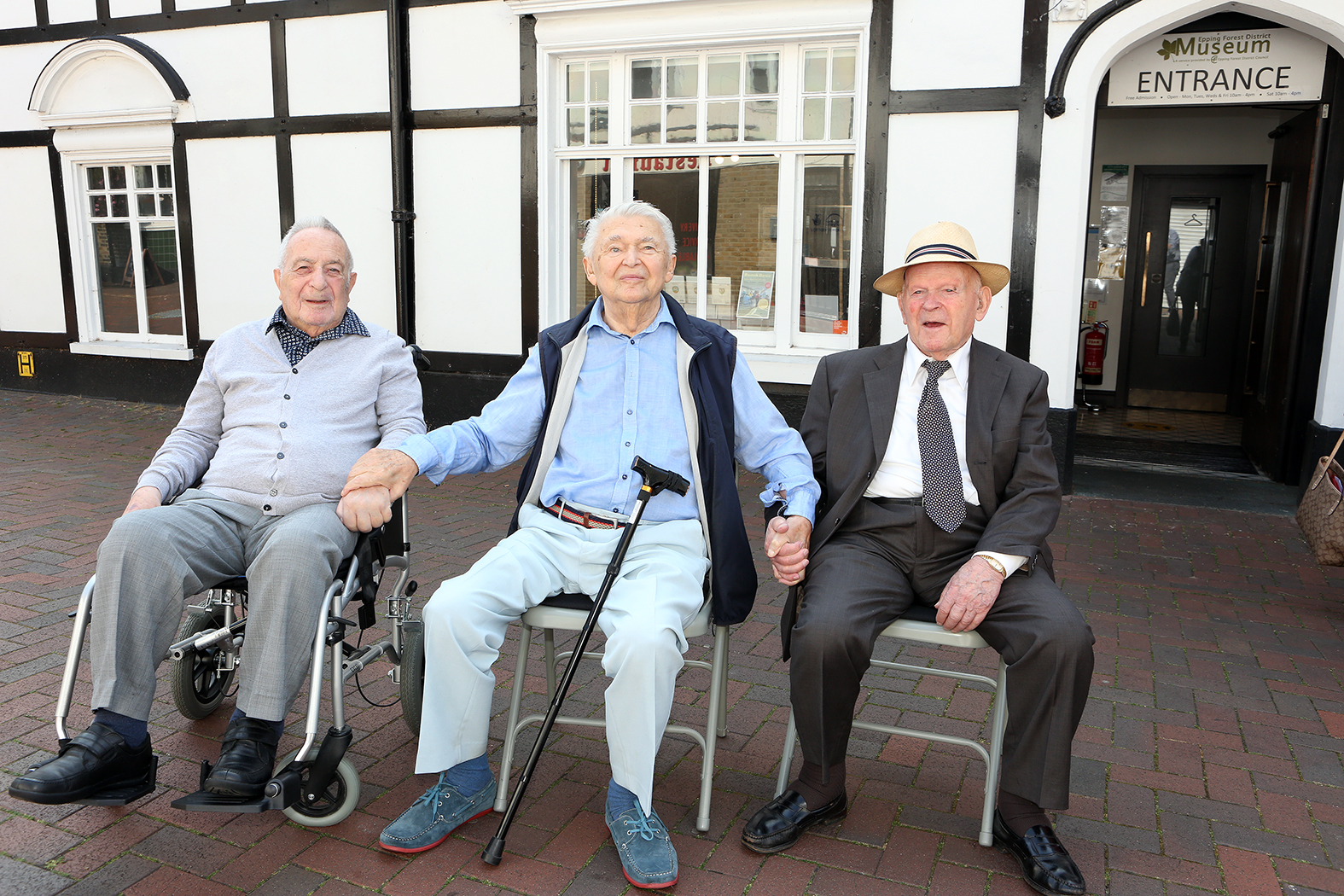 Jan’s elder brothers, at his parents’ urging, ran away. The rest of the family ended up in a small town where Jews were rounded up on a daily basis. One night Jan, aged 12, and his father, were in bed “when the Germans burst in and tore me from his arms”.

Years of different concentration camps followed until he, like many of the other Boys, spent the dying days of the war in Theresienstadt in Czechoslovakia, until liberated by the Russians. He never found out what became of his family.

Taking part in Sunday’s celebrations were many Second Generation sons and daughters. Robyn Frydman and her husband had come from Florida to honour the memory of Robyn’s father, Loughton Boy Gerson Frydman, who became known as Jeff. He had been born in Lodz in 1923, so was 22 by the time the British airlift arrived in Prague to take the Jewish orphans to safety. He had survived Auschwitz and several other camps, and was determined to find a place on the British transport. Twenty-two was far too old to qualify, but, Robyn said, “he just lied”. And that went for a number of The Boys, who didn’t find it hard to convince British authorities that the emaciated orphans boarding the flight in 1945 were indeed as young as they claimed to be.

As 45 Aid chairman Angela Cohen, daughter of one of The Boys (though not one sent to Loughton), remarked, each one of the group made a home for themselves, a living and a family. 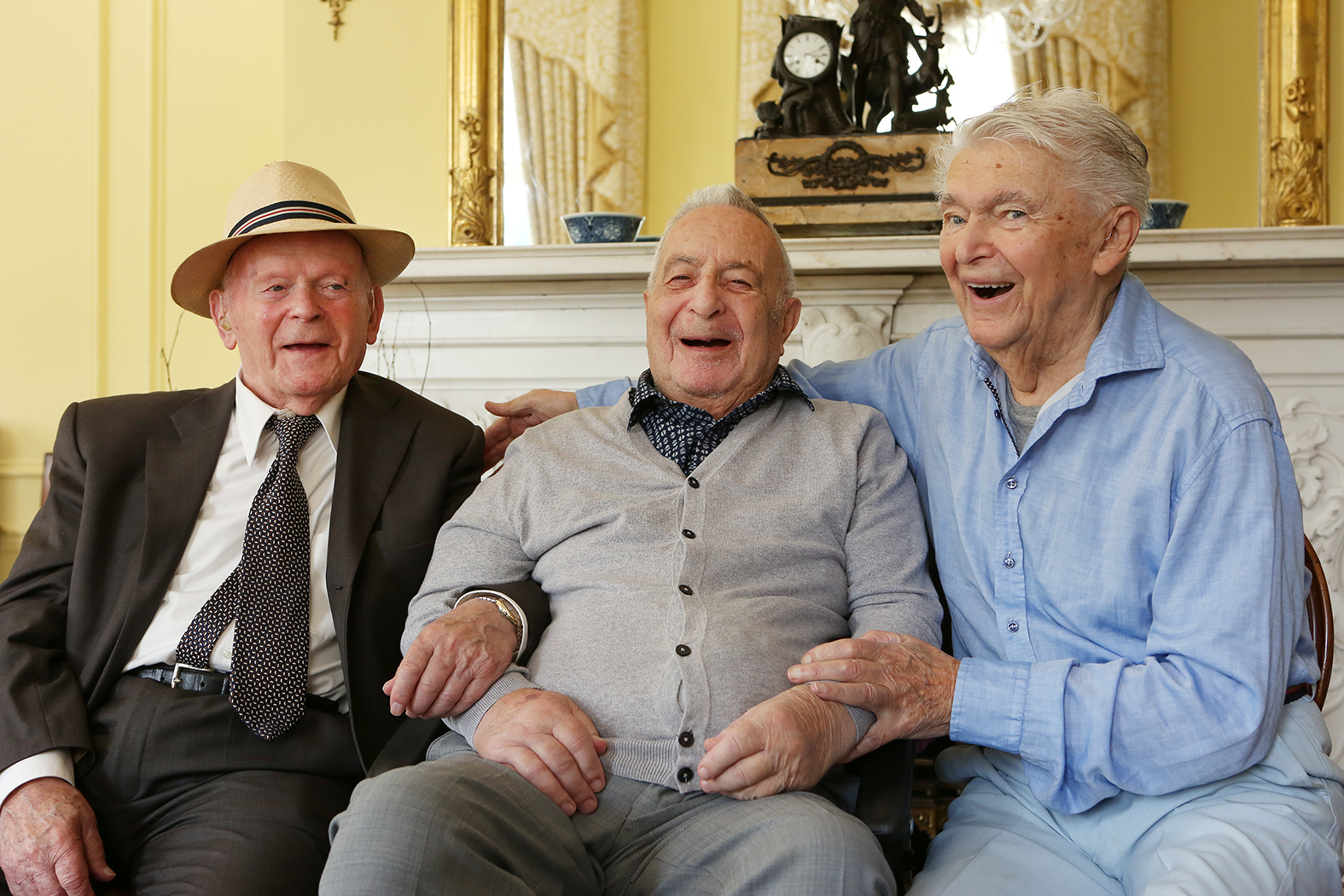 (l to r) Sir Ben Helfgott, Jan Goldberger and Harry Spiro pictured at a lunch inside Holmehurst, the original Loughton hostel, now a privately owned residence owned by Wendy and Richard Higgins, who opened up their home to a group of 80 members of the ’45 Aid Society, including the 3 Loughton Boys and their families as well as other Boys and local dignitaries (credit: Melissa Page)

Nowhere was that more apparent than the affectionate teasing between the survivors — and the familiarity of the descendants with each other and their survivor “uncles”. “We didn’t have cousins or grandparents”, Harry Spiro’s daughter Tracy said, “but we had each other, and we were each other’s family”.

Tributes were paid to Wendy and Richard Higgins, the local community, and the fierce determination of the Loughton Boys to make the most of their opportunities in Britain. Rabbi Odom Brandman, of Buckhurst Hill Chabad, blew the shofar to welcome in the new year and it was left to Robert Rinder, son of Angela Cohen, to remind his audience “how easy it is to forget the meaning of sanctuary”.

As the Holocaust survivors had good reason to know, “life can change in the blink of an eye”. But Holmehurst, and Britain, had become a welcoming sanctuary for young Jews. Most importantly, he said, was that events such as Sunday’s allowed everyone “to become the bearers of memory”.

It was a message undoubtedly taken to heart by everyone present.