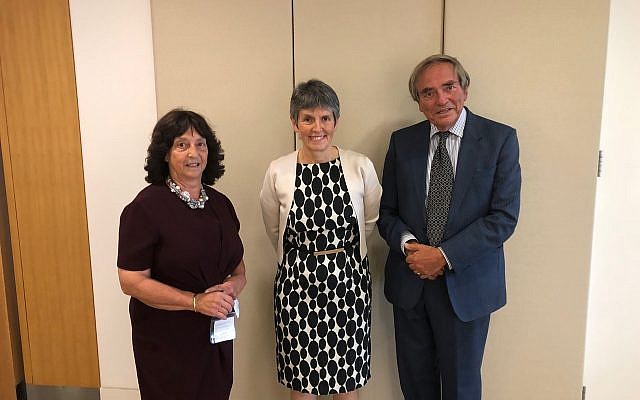 Two of the first engagements made by the newly minted Dame Cressida Dick, the Metropolitan Police Commissioner, were with the Jewish community.

On Wednesday, after her return from Australia where she discussed counter-terrorism with southern hemisphere colleagues, Dame Cressida spoke to more than 130 rabbis (from the UK and Europe) as part of Chief Rabbi Ephraim Mirvis’s pre-High Holy Days seminar.

In the evening the police chief, who received her damehood as part of outgoing prime minister Theresa May’s resignation honours, addressed a packed audience under the auspices of the UK Association of Jewish Lawyers and Jurists.

In wide-ranging remarks, Dame Cressida, who has a 36-year-long police career behind her, spoke about hate crime and the combating of terrorism. In terms of antisemitic hate crimes, the Commissioner said, there had been 600 reported nationally in the last six months, 60 per cent of which fell into Metropolitan Police territory.

But, while not seeking to diminish the issue or be complacent, she said that the vast majority of such hate crimes were not violent, adding that it was “relatively rare in London to have serious hate crimes”. Cressida Dick with the Chief Rabbi

Praising the Met’s relationship with the Jewish community’s Community Security Trust (CST), Dame Cressida said it was “exceptional”, adding that she believed it was “very important that CST helps other minority communities”.

She also spoke warmly of links with Israeli police. The Met Assistant Commissioner, Neil Basu, is in Israel this week, meeting opposite numbers in Tel Aviv and Jerusalem, and discussing technology and training in what Dame Cressida called “a very important relationship”.

Though she was at pains not to make any political points, the Commissioner did say that she hoped that a government pledge to increase police numbers by 20,000 meant that the Met would get at least 6,000 of that figure. She hoped that “more police visibility” on the streets would act as a deterrent to crime and give more confidence to London’s residents.

Dame Cressida also referred to the differences in policing today compared with her early years on the beat. The major difference, she suggested, was in the use of technology: “DNA was not used then as a method to inform policing, and there has been a massive change in the ability of police to protect the public through technology”.

The UK Association of Jewish Lawyers and Jurists, chaired by Sir Michael Burton, is non-political and is affiliated to the International Association of Jewish Lawyers and Jurists, based in Tel Aviv. The organisation, which holds regular programmes and seminars, is authorised by the Bar Standards Board and the Solicitors Regulation Authority to provide courses for continuing professional development purposes.