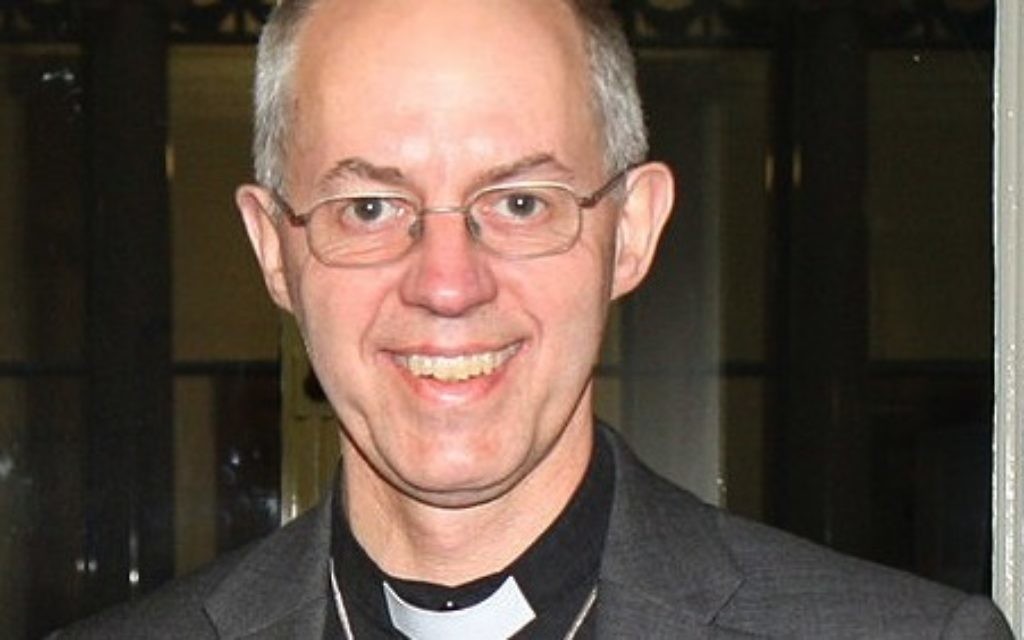 The Archbishop of Canterbury said he was “often deeply embarrassed” by some failings of the Church of England in tackling anti-Semitism,

Justin Welby said people should be shocked by the rise in anti-Semitism and described it as “blasphemy”, as he hosted the launch of the All-Party Parliamentary Inquiry into Anti-Semitism at Lambeth Palace.

Archbishop, Justin Welby (Blake Ezra Photography)
The Archbishop said the spike in anti-Semitic incidents in the UK and the Paris terror attack on a Jewish supermarket had made the report more timely. “The need for increased police patrolling of Jewish neighbourhoods in response to security concerns was a “peculiar and remarkable obscenity when we are in the midst of commemorating the 70th anniversary of the liberation of Auschwitz”, he said.

The problem of anti-Semitism was “deeply embedded in our history and the culture of Western Europe”, the Archbishop acknowledged as he praised the all-party group for highlighting “the stark reality of rising anti-Semitism in this country and the key responses necessary to counter it”.

The issue of anti-Semitism goes to “the heart of the belief that all humanity has been made in the image of God. The blasphemy of anti-Semitism is that it seeks to diminish, distort and ultimately destroy that divine gift.”

The event came on the same day as the Bishop of Guildford announced that Rev Stephen Sizer, of Christ church Virginia Water, would refrain from tweeting, speaking or writing about the Middle East after he posted a link to an article entitled ‘9/11 Israel did it’.

Speaking to the BBC, he said: “I was utterly dismayed, deeply ashamed and totally appalled that such a link should be made to a website of the sort he did. I’m very glad there has been a statement from the Diocese of Guildford in which he’s undertaken never to comment on Middle East affairs in any way.”

The Archbishop – who was praised for his stance – said he would ensure that the Church of England paid attention to the contents of the parliamentary group’s report as he acknowledged failings in the past.

He said: “It is our responsibility, now, to respond to this report by acting on its recommendations. I want to say that, despite our failings – of which I am more than aware and often deeply embarrassed – as the Church of England we commit ourselves to be both accountable and to hold others to account and to pay attention to this report.”

Also welcoming the report at the launch were Commons Speaker John Bercow, who insisted the online abuse suffered by Jewish parliamentary colleagues was “intolerable in a civilised society” and communities minister Stephen Williams, who backed a review of the applicability of prevention orders for anti-Semitism online. He added: “The cross-Government working group on anti-Semitism will take all of these recommendations forward.”

Shadow Home Secretary Yvette Cooper, also addressing the gathering of politician and community leaders, said: “This is about us all standing together against anti-Semitism – faiths, political parties – to say we won’t tolerate anti-Semitism in the 21st century. we know there are those who wish to divide us but we also know the determination of those who stand against the hatred is far greater, and we need to channel the determination. That’s what this report is about.”

John Mann was praised for his unflinching campaigning against anti-Semitism, while speakers also hailed the work of Danny Stone and Amy Wagner at the All-Party Parliamentary Group.