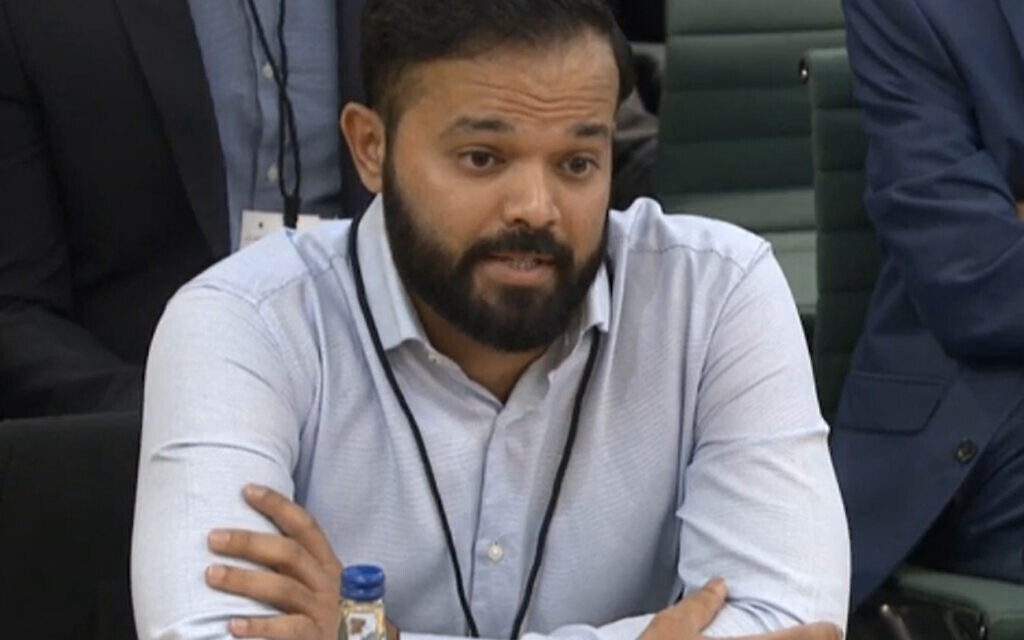 Screen grab from Parliament TV of former cricketer Azeem Rafiq giving evidence at the inquiry into racism he suffered at Yorkshire County Cricket Club, at the Digital, Culture, Media and Sport (DCMS) committee

Azeem Rafiq has said he doesn’t expect to secure the forgiveness of British Jews “quickly” but vowed to do all he could to educate himself and others about antisemitism.

In his first interview since revelations emerged about hateful comments he’d made on social media a decade ago, he told Jewish News he’d had little contact with Jews as a youngster and promised to now use his platform to try to be a bridge between Jews and Muslims.

Following harrowing testimony in Parliament this week, the former spin-bowler, who says racism robbed him of his career, was revealed to have used derogatory comments about Jews on a Facebook post in 2011.

The Board of Deputies and Community Security Trust welcomed a total apology from Rafiq, in which he said he was “deeply ashamed” of his comments, and it is understood he is meeting with both the CST and the government’s antisemitism envoy, Lord John Mann.

Speaking to Jewish News, he reveals a lack of contact with the Jewish community may be the root of his racist comments, saying he doesn’t recall having a Jewish team mate and hadn’t “integrated” with Jewish people.

Saying he “felt sick to my stomach” and “very angry with myself” over the revelations, Rafiq said it was “completely up to the community” on whether to forgive him.

“I just hope that they can see that I am genuinely sorry about the comments and the hurt that it caused.”

He echoed comments made  on Tuesday during a hearing of the Digital, Culture, Media and Sport select committee, saying “ I’ve always said that if you apologise, you should get a second chance. But obviously, I think in all cases it is for the victims to decide that.

“I don’t think I’m in any position to be asking the Jewish community on how they feel. All I can do is do my best, to show them that I am sorry.  And time to understand and learn and educate myself to make sure that I’m improving myself.”

When asked whether he thought anything might come up about his past ahead of the committee, he said “Not at all.  I was made aware of it yesterday morning. And, to be honest, it brings the cause right to the forefront. It just shows how far we’ve got to go”.

Following the revelation of Rafiq’s comments, Dave Rich of CST said on Twitter they were “ really bad, and very common” remarks.

The anti-Jewish slurs used by Azeem Rafiq and exposed by @thetimes are really bad, and very common. Just another window on what passes for "banter" about Jews. But his apology comes across as a proper apology, and that is a lot less common. https://t.co/1xPup2B91I pic.twitter.com/KceFoAZPY3

“I don’t feel that antisemitism is that common. But.. sometimes when things affect you, you remember it a lot more clearly than when it doesn’t. And clearly I was off completely out of order.

“I deserve all the flak I get from it”.

Earlier this month, former England captain Michael Vaughan categorically denied claims he used a racist term, despite corroboration from two former team mates. Asked whether some players may not remember what they have said in the past, Rafiq said: “completely, I said that. I’ve said that from the offset. And he probably doesn’t remember it. It was a long time ago, and it doesn’t affect him directly.

“All I can do is talk about myself and some the minute I was made aware, I wanted to apologise.

“I don’t expect it to be quick, but in time the Jewish community can forgive me.”

Asked whether antisemitic attitudes are widespread within parts of the Muslim community, the former cricketer said “it’s something I’m not really that aware of, if I’m being perfectly honest. I don’t really know. I don’t want to go into details that I’m not that aware of. I made a mistake. And I don’t I really want to make any excuses around that. I want to front up, apologise and hopefully spend some time with the Jewish community to learn.”

“I’ve never spent time round Jewish people. I don’t think for any other reason, but the fact that all I’ve done is play cricket all my life. I wouldn’t even say I’ve spent that much time around my own community. Because all I’ve done from a young age when we moved from Pakistan is just play cricket.”

On whether he can use this experience to change attitudes within the Muslim community, he said “I hope so. I don’t think that should be the one deciding what happens. It’s up to the Jewish community.

“I see it as an opportunity for all minorities. And I just think we could all unite together, sit on one table and actually fight for the cause that I’m fighting for. Hopefully, doesn’t derail the cause.  Because whatever sort of happens to me in a personal capacity is not that important. . I said yesterday, I don’t have any mistakes I’ve made whatever happened to me on a perfect capacity is not that important. The cause is bigger. And I’m hoping that with the Jewish community on board these things change.”

Asked whether he’s concerned that his antisemitic comments might damage the cause of tackling racism, and discredit his work, he said: “ I think people discredit me. I think it could affect me. But I don’t think I don’t think  it should affect the cause. Actually, if anything, I think it keeps the conversation right at the forefront of everyone’s minds. 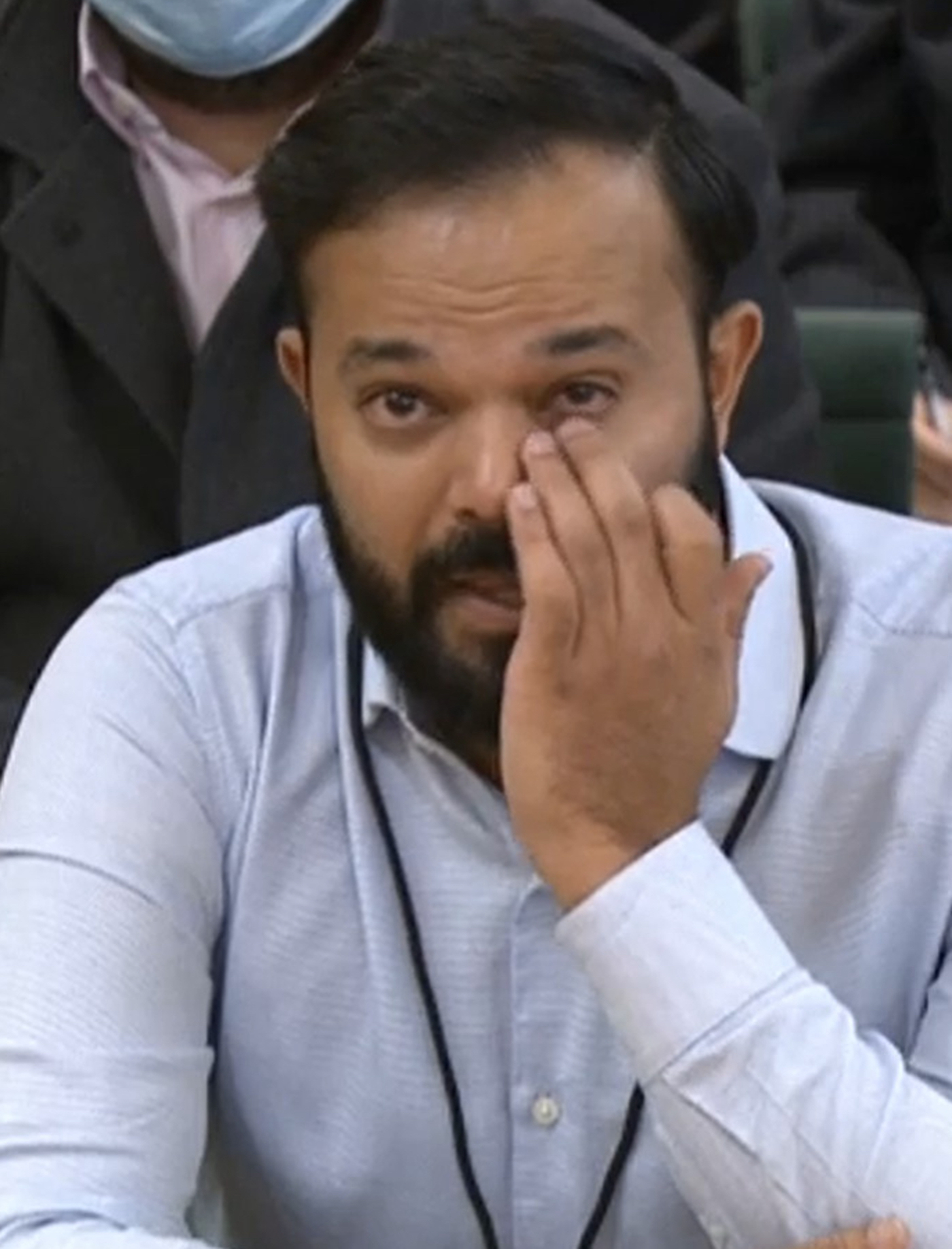 Screen grab from Parliament TV of former cricketer Azeem Rafiq crying as he gives evidence at the inquiry into racism he suffered at Yorkshire County Cricket Club, at the Digital, Culture, Media and Sport (DCMS) committee on sport governance at Portcullis House in London. Picture date: Tuesday November 16, 2021.

“And if we can get together and actually get on the same table and work together, I really think we can match the cause. I think the only thing that could affected me personally.”

Reflecting on the personal impact of the incident, he said he was “just really angry at myself” adding that his antisemitic comment is “not the view that I have”.

He added that in the last 18 months, “the main thing I’ve said is how I’ve been left on my own by my own community, and that we should be using the Jewish community as an example to how they stick together.

“So it’s yeah, it’s disappointing. I’m just angry with myself.”

On Thursday, The Times revealed an exchange between Rafiq and the former Warwickshire pro Ateeq Javid, in which he says another colleague is “a Jew” because they were reluctant to spend money. In another comment Rafiq claimed he will “probs go after my 2nds again ha . . . Only Jews do that sort of shit”.

Questioned on whether he remembered the comments and his thought process at the time, Rafiq said” “I really don’t. Obviously, It got brought to my attention. I don’t recall what was happening around that time with me. But I just wanted to make sure that I don’t want anything that was happening with me.. because I don’t want any sort of excuses for what I’ve done.

It’s wrong in every way, shape, or form. I’m incredibly sorry. And I just hope that over time that people can forgive me for the the hurt that I’ve definitely caused. Especially when I’ve had so much support from the Jewish community”.

Comments made by Azeem Rafiq

Reflecting on gaining an understanding of antisemitism, he said “Without doubt” he’d call it out if he saw it today.

“I’m gonna try and educate myself even more.”

He added that he’s “reached out to a few people” in the Jewish community “and hopefully, that’s going to happen in private, very quickly. But it’s important that they run it and they decide when, as opposed to me.

Reiterating his apology, he said he wants to appeal “not only the leaders [of the community] but with the normal man off the street”.

Following revelations about his remarks and support from the Jewish community, he said he was “grateful they see that it’s sincere, and I want to make sure I do  that in person as well.” 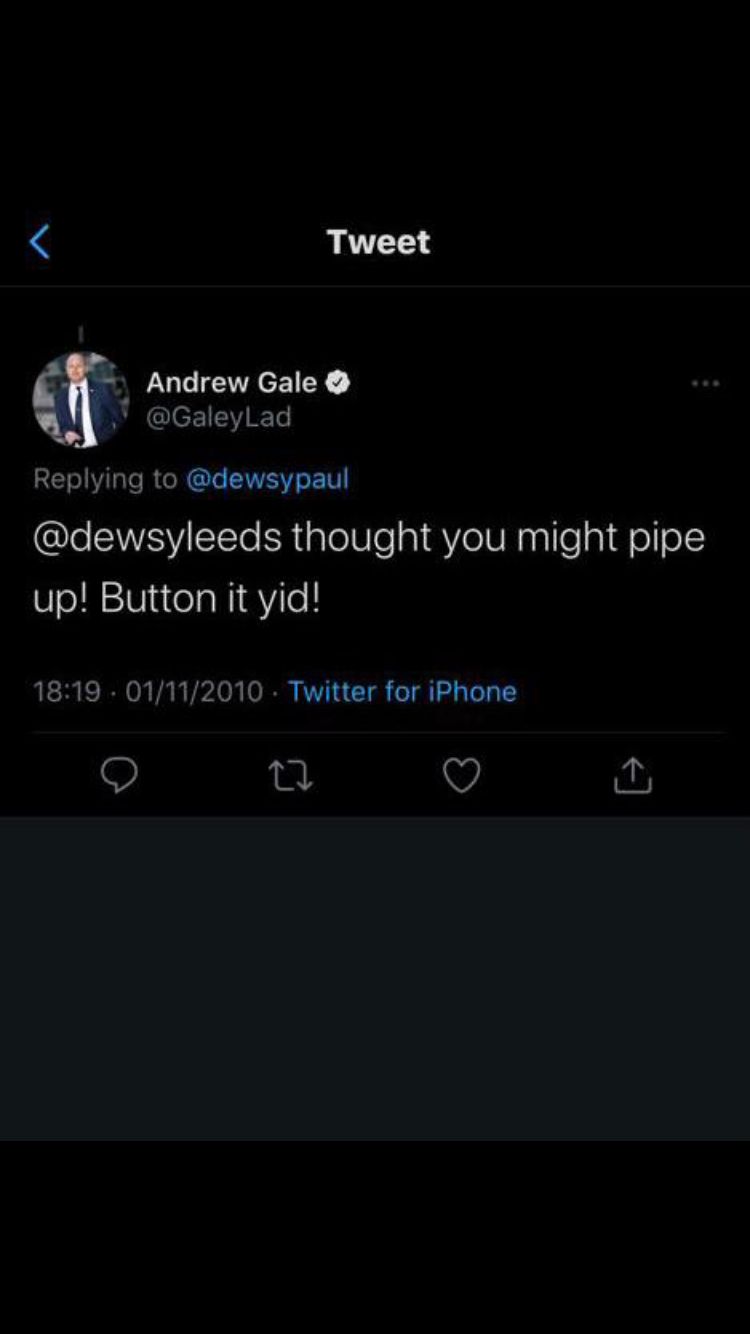 Gale apologised and insisted he didn’t understand the term, but was suspended by the club. Other high-profile former teammates, Gary Ballance, who used the p-word, and Jack Brooks, who called Indian star Cheteshwar Pujara ‘Steve, also apologised for using racist language.

After some former colleagues said they didn’t recall using racist language, Rafiq was asked whether he remembered writing his comment. “I genuinely don’t recall it”, he said. “But that doesn’t mean anything, that is not an excuse. That that’s just me being really honest.

“I am different to others I hope, in that I’m owning, there’s no getting round it. My actions over the weeks and months coming, will will prove that that I’m really sorry for every bit of hurt.”