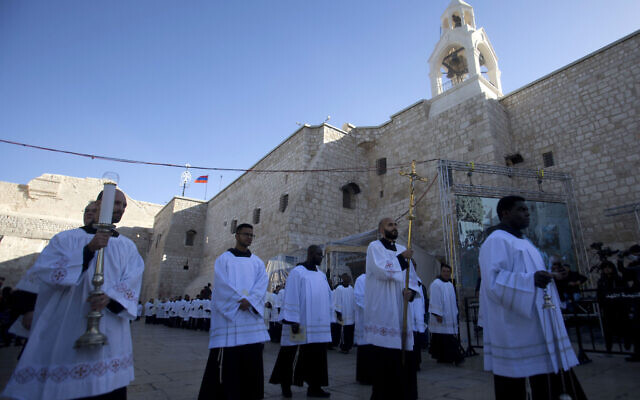 Clergymen participate in Christmas celebrations outside the Church of the Nativity, built atop the site where Christians believe Jesus Christ was born, on Christmas Eve, in the West Bank City of Bethlehem, Tuesday, Dec. 24, 2019. (AP Photo/Majdi Mohammed)

The Church of the Nativity in the biblical city of Bethlehem is being closed indefinitely over fears of Covid-19, weeks ahead of the Easter holiday that draws tens of thousands of visitors and worshippers, Palestinian authorities said.

The announcement by the Palestinian tourism ministry highlighted the spread of the virus across the Middle East, where worship at major holy sites has been greatly disrupted by the health scare.

The Church of the Nativity was closed after suspicions that four Palestinians had caught the virus, prompting a flurry of measures that included banning all tourists from the West Bank for an unspecified amount of time and shutting down other places of worship in Bethlehem for two weeks.

If confirmed, the four suspected cases would be the first in the Palestinian areas.

Built on the grotto where Christians believe Jesus was born, the church joins a list of prominent tourist and holy sites to shutter their doors in the wake of rising fears over the spread of the virus, which has infected tens of thousands and killed more than 3,000 globally.

“We respect the instructions of the relevant authorities,” said Wadie Abunassar, an adviser to Catholic church officials in the Holy Land.

The virus has disrupted Muslim worship across the Middle East, yet other major places of worship in the Holy Land remained open.

In Jerusalem, the Western Wall, the holiest place where Jews can pray, had no restrictions and the nearby Al Aqsa mosque compound was expected to welcome 50,000 worshippers for Friday prayers.

The Islamic Waqf, which administers the site, encouraged the faithful to ensure good personal hygiene.

Israel, which has 15 confirmed virus cases, has taken strict measures in a bid to stave off an outbreak, including banning the entry of visitors from some 10 countries.

With many tourists to the West Bank flying in through Israel’s international airport, the Palestinians are likely also being affected by those measures.

The virus has started to shake Israel’s tourism industry as well.

Israeli airline El Al, which has cancelled dozens of flights to countries with a virus outbreak, announced on Wednesday that it was laying off 1,000 employees in a bid to cushion the economic fallout from the virus.

The Nativity Church receives some 10,000 tourists a day, according to Palestinian officials. It is expected to welcome tens of thousands of visitors, many of them foreign tourists, during the busy Easter season.

If the measures remain in place, the fledgling Palestinian tourism industry could take a walloping – with tourists currently in the West Bank instructed to leave once their bookings end.

“We are in the peak of the season,” said Palestinian tourism ministry spokesman Jeres Qumsiyeh.

“Tourists are leaving and within days no single tourist will be in the city.”

These mark the latest disruptions of life across the Mideast from the new virus, which has seen over 3,740 confirmed cases in the region.

The Nativity Church, where scouts’ bands march, multi-denominational clergy deliver mass and faithful pray during the Easter holiday, was set to close at 4pm Thursday after being disinfected, said Mr Qumsiyeh, the tourism ministry spokesman.