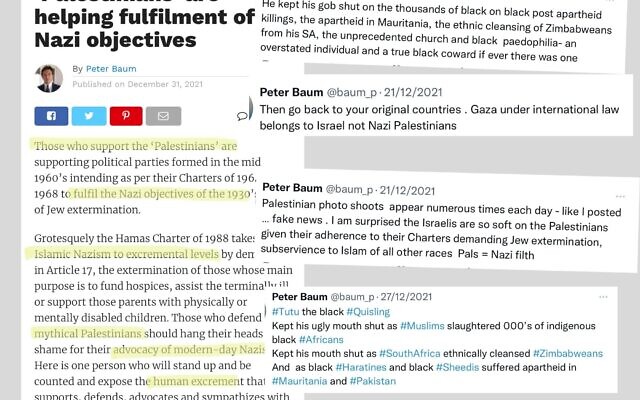 Some of Peter Baum's comments

The Board of Deputies is investigating another accusation of racist social media posts made by one of its deputies.

A formal complaint has been submitted over tweets sent last month by Peter Baum, who represents Southend and Westcliff Hebrew Congregation (SWHC).

Baum appears to call Desmond Tutu a “black coward”, Palestinians “Nazis” and their supporters “human excrement”, which appear to break the organisation’s code of conduct.

This comes after senior vice president of the Board, Gary Mond, resigned as an honorary officer following an expose by Jewish News into posts he endorsed from anti-Islam activist Pamela Geller, who is banned by the UK.

Baum responded to the death of South African Anglican Archbishop Desmond Tutu, a campaigner against apartheid and critic of Israel, by branding him a “true black coward”, accusing him of having “kept his gob shut on the thousands of black on black post-apartheid killings”. He made reference to “black paedophilia”, and said Tutu will “rot in hell”, calling him a “black quisling”. 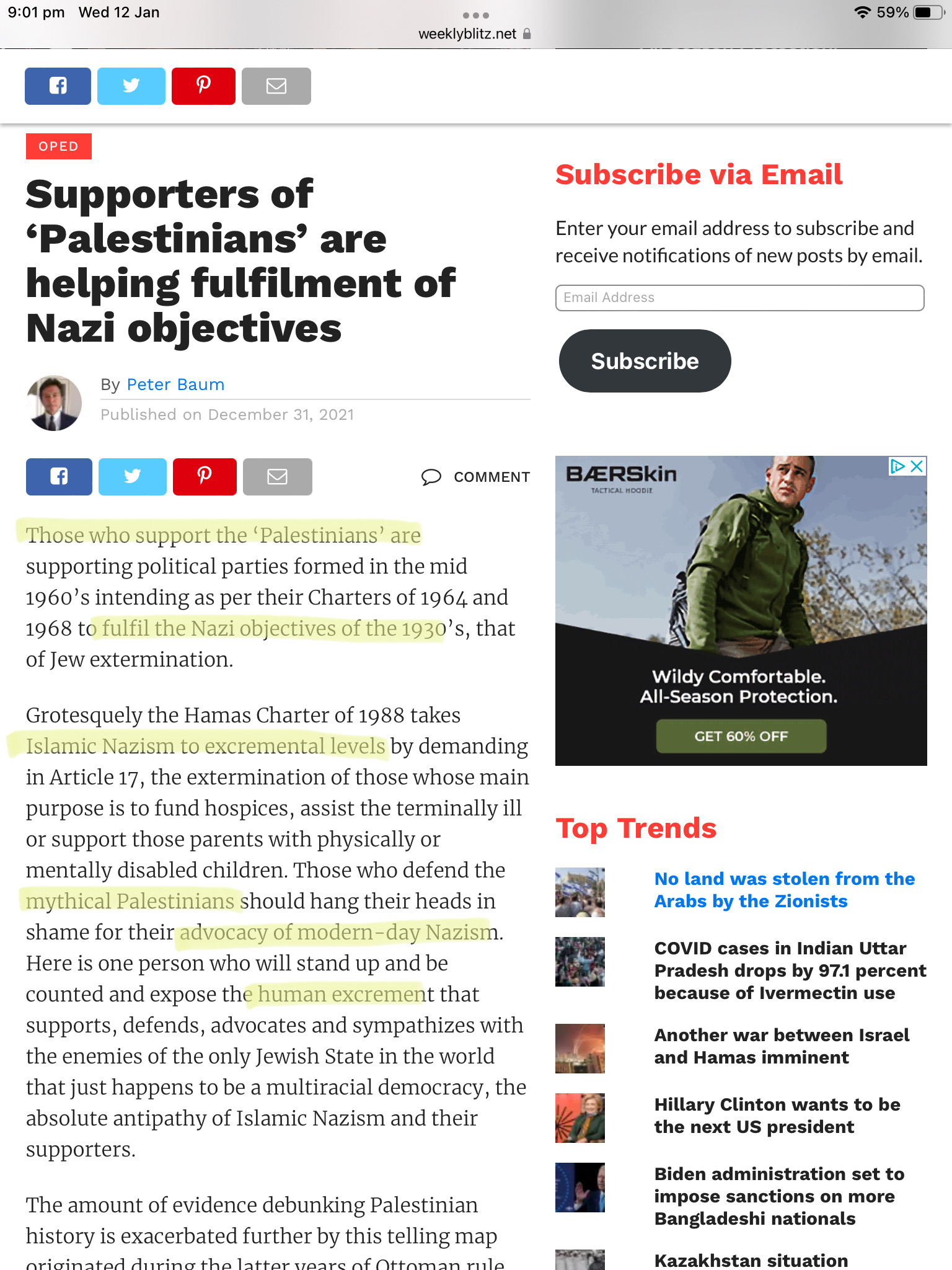 He also made derogatory remarks about Palestinians, writing an opinion piece published on WeeklyBlitz on 31 December, saying their supporters are “human excrement” who want to “fulfil the Nazi objectives of the 1930’s, that of Jew extermination.”

Baum claims the Hamas charter takes “Islamic Nazism to excremental levels” while calling Palestinians “mythical”. In a series of tweets throughout December he labels Palestinians “Nazis”, telling a pro-Palestine tweeter they should “go back to your original countries”, and saying he’s “surprised the Israelis are so soft on the Palestinians”, who are “Nazi filth”.

Baum recently signed a letter in support of JNF UK’s chair Samuel Hayek, who is facing calls to resign over Islamophobic comments, which has led to the Charity Commission launching an investigation. 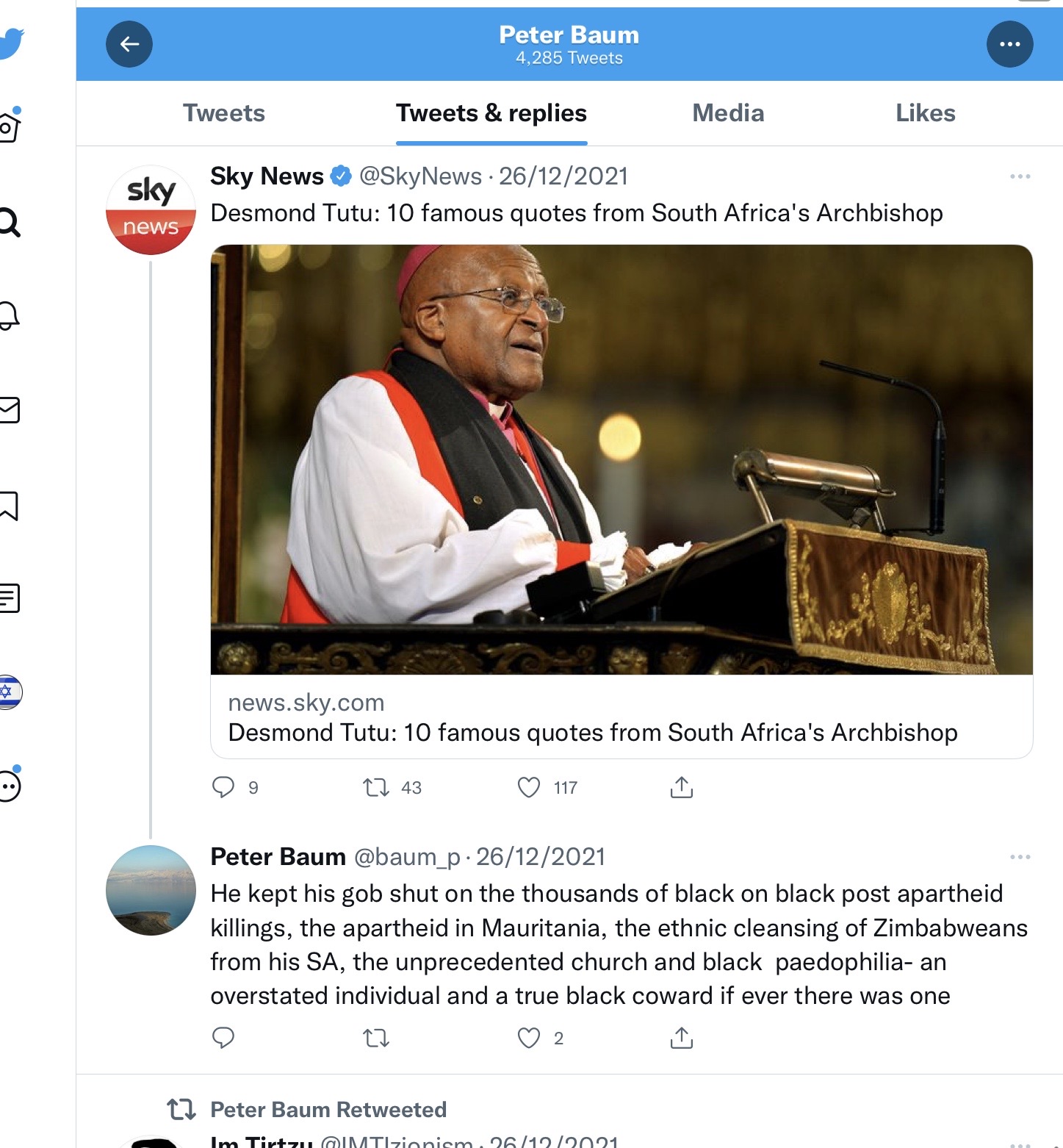 Baum told Jewish News his tweets were “definitely not sent on behalf of SWHC or on behalf of the BOD but in a purely personal capacity”.

A Board of Deputies spokesperson said: “This complaint has been received and is now in the hands of the Constitution Committee.”

A spokesperson for SWHC declined to comment, but said the complaint had been passed to its executive.

Gabriel Kanter-Webber, who made the formal complaint to the Board, said: “People are welcome to take whatever view they like about Desmond Tutu or the Israeli-Palestinian conflict. However, Board of Deputies members have voluntarily signed up to a code of conduct prohibiting them from expressing racist sentiments – and my understanding of Judaism is that such wrongdoing must be vigorously challenged.”

The Board’s code of conduct says it “applies to personal, business and professional activities where the reputation of the Board may be affected.” It adds that all deputies should “act with integrity and probity in all their dealings” with other deputies, the community and wider public.