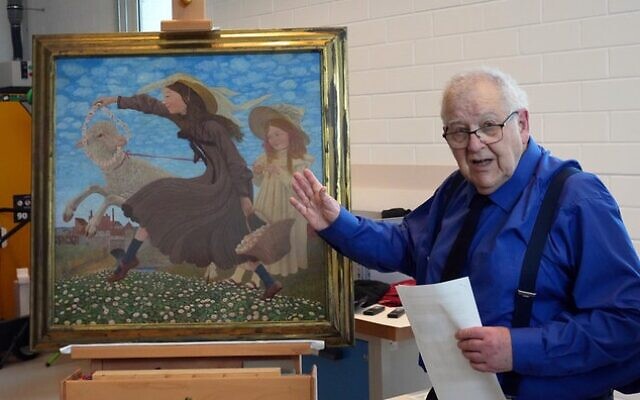 The owner of a micro brewery will soon be able to put on its walls a picture stolen by the Nazis 81 years ago.

Tom Beran, who owns The Bumble Inn in Peterborough, will be given the painting by his father Max, who had it restored to him by a German gallery last week.

Max’s grandmother, Irene Beran, was a collector in Brno, then Czechoslovakia, until she and her family had to flee their homeland as the invading Germans imposed the ‘final solution’.

Irene, who was also based in Munich, was friends with Gustav Klimt and Egon Schiele, and loaned many of her pictures to galleries before the Nazis seized power.

She eventually fled to the USA and died in Palma de Mallorca without ever trying to retrieve her valuable lost art. But the Prussian Palaces and Gardens Foundation (SPSG) found the family in the past 20 years and this is the second work it has restored to them.

Max was in Potsdam on Friday to be given the second of his grandmother’s paintings, called Schäfchen, or Little Sheep, by artist Thomas
Theodor Heine,.

Max said at the ceremony: “I am delighted to receive this whimsical painting that was hung in my grandmother’s home in Brno and was lost when the Nazis occupied Czechoslovakia, introducing inhuman measures to divest Jews of property and the means to live.”

Ulrike Schmiegelt of the SPSG discovered the painting’s history after joining the collection two years ago, but Max could not pick it up until this year because of lockdown. Other researchers are working to bring the rest of Irene’s collection together again.

Irene and her husband Philipp started collecting from artists in their circle such as Klimt and Schiele. Philipp’s brother, Bruno, became an artist and Irene later divorced Philipp and married her brother-in-law.

Bruno’s landlord in Munich was the artist Hugo von Habermann, who painted a portrait of Irene that was returned to Max in 2007. Heine was the editor of the highly influential satirical magazine, Simplicissimus – and was another tenant in the same building.

Max said: “We do not know what attracted Schäfchen to Irene. Ulrike has suggested the name association – Beran being the Czech word for ‘ram’.”

Irene and Bruno both escaped after the invasion of Czechoslovakia, but Philipp was deported to Theresienstadt concentration camp on 5 December 1941, deported to Riga on 15 January 1942, where he was murdered.

A researcher, Lubomir Slavicek, established who was the rightful owner of both the portrait of Irene and of Schäfchen.

Max added: “The heavy lifting has been done by Vienna professionals but there is much to motivate me –not just the prospect of the return of works of art and the writing of a historic wrong, but also to put on record Irene’s amazing achievements.

“I hope to unearth some clues about the fate of more of Irene’s pictures such as a Klimt portrait. The family owns several of his works, in some cases purchased directly from him.”

Christoph Martin Vogtherr, director general of the SPSG said on Friday: “Today we can give back something that doesn’t even belong to us. Museums are institutions with high moral standards. We have to live up to this claim. For a long time, museums would not have seen, heard or said anything about the return of stolen art. Fortunately, those times are over.”

The painting is insured for a low five-figure sum, but it has far greater emotional value and the family wants to keep it.