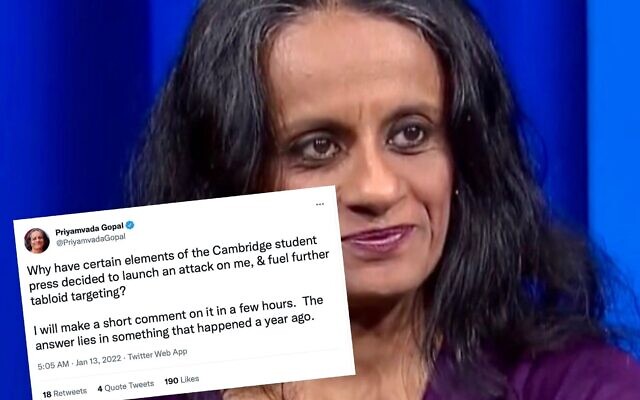 A Cambridge University professor is facing claims she has made “conspiratorial attacks on Jewish students” after alleging became a target because she had voiced opposition to the IHRA definition of antisemitism.

Priyamvada Gopal, professor of postcolonial literature, was criticised by the Cambridge University Jewish Society on Thursday after she tweeted an astonishing attack on two students who she accused of committing “the perfect murder” on her as “someone whose views on IHRA you don’t like.”

Her onslaught came after the Varsity student newspaper, for whom the two Jewish undergraduates work, published an interview Cambridge donProfessor David Abulafia, who accused Gopal of making “potentially libelous” comments about him.

History professor Abulafi had earlier written an article for the Daily Telegraph about the trial of activists who toppled the statue of Edward Colston in Bristol.

He argued that pulling down the statue did not “aid historical understanding” and that the activists should not be deciding its fate.

Professor Gopal -then tweeted: “‘Few undergrads produce work this weak after the first week or so.”

The row between Gopal and Abulafi  – born in London to a Jewish family and spent most of his career at Cambridge, specialising in Mediterranean history – ended up appearing in several national newspapers this week.

Why have certain elements of the Cambridge student press decided to launch an attack on me, & fuel further tabloid targeting?

I will make a short comment on it in a few hours. The answer lies in something that happened a year ago.

Responding to the coverage Gopal tweeted on Thursday: “Why have certain elements of the Cambridge student press decided to launch an attack on me, and fuel further tabloid targeting?

“I will make a short comment on it in a few hours. The answer lies in something that happened a year ago.”

Gopal then referred to an article she had written a year ago for the Guardian with a colleague, which had suggested right-wing free speech advocates had made a “significant exception” by agreeing to adopt IHRA guidelines at Cambridge.

She tweeted that the article had”attracted the ire of some students, even though we only made a passing reference to the IHRA.”

Linking this fall-out from this article to more recent stories about her spat with Abulafia, Sobel wrote:”Meanwhile there have been editorial changes at Varsity, the student newspaper.

“The news editor–who made up the fake ‘battle’ about my supposed charge of ‘racism’ against a retired History Reclaimed member– is among those who vociferously lobbies for adoption of IHRA guidelines in full.

“This means, I’ve been in their sights for some time and now they have access to producing news stories about me as they please. Hey presto!

“It’s the perfect murder in some ways. Target someone whose views on IHRA you don’t like, get access to ‘editing’ campus news & publishing it, write fake news report, then get another person to write vicious personal attack.

“It’s also, in a nutshell, in form of petty campus drama… how the national media, esp under Murdoch and the various other press barons, operate.

“They make the news, they write it up, they target, they assault, they win.  It’s a great shame to see this happening with the student press but it was also inevitable. ”

In further inflammatory remarks Gopal then tweeted:””As it happens, the student ‘journalist’ who kicked off this assault, also has quite powerful familial connections to the liberal media.

” So none of this is quite the little campus story of a naughty lecturer who said mean things that it is supposed to be. It’s grim stuff, with grim precedents.”

Jewish News has agreed not to name the two students who are the subject of Gopal’s attack.

But we have spoken to one of them who expressed shock at the lecturer’s attempt to claim  the Varsity article was related to her critique of IHRA.

Jewish News was also told that one of the two students was actually an opponent of IHRA themselves – on free speech libertarian grounds.

The other had once signed a petition in support of adopting the definition – but they dismissed claims they could be described as a “lobbyist” for IHRA on the strength of one act in support of it some time ago.

“Priyamvada Gopal, a senior academic, with a Twitter following of over 80,000 people, has used that platform to make a number of baseless and damaging accusations against two Jewish student journalists

“In an inflammatory twitter thread she echoes historic tropes about media control, and goes on to insinuate that the Jewish journalists are acting out of fidelity to the IHRA definition of Antisemitism

“Jewish students, including the ones targeted, have differing political views. We condemn these lazy generalisations and misassumptions, applied to a diverse group of students.

“Student journalists should be judged on the merit of their writing, not their background. It is telling that their words were instinctively ascribed ulterior motivations.

” We would like to make clear that we are here for all Jewish students who have been affected.

“Unfounded, conspiratorial attacks on our members are unacceptable and we will always advocate fearlessly on their behalf.

“UJS has always acted in good faith when advocating for a robust complaints procedure to tackle antisemitism. We have always had an open door policy and have had numerous meetings with academics who are critical of our approach.

“If Professor Gopal would like to change course and desist from tweeting conspiratorial attacks on Jewish students our door is always open.”

Gopal has spoken about having family roots in India and is vocal on Twitter about race. In October, she was stopped from delivering a lecture in Whitehall because of remarks she made about Home Secretary Priti Patel.

Jewish News has contacted Cambridge University and Gopal for comment.