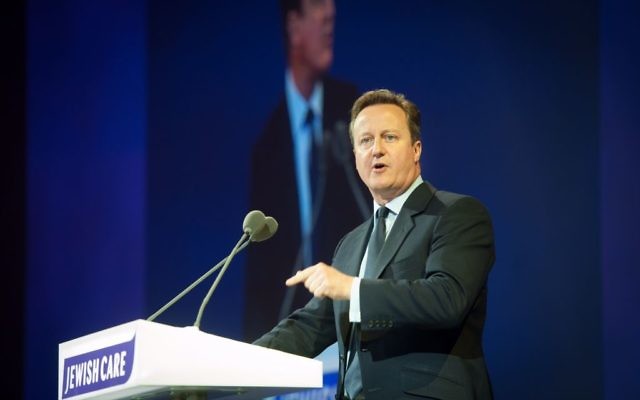 David Cameron has insisted Britain can only impact Europe’s approach to Israel by remaining inside the EU as he called on the community to roundly reject the “divisive and intolerant” campaign of Nigel Farage.

The prime minister used his only address to Anglo-Jewry of the referendum to insist that the country’s influence is “enhanced” rather than diminished by being part of the Union on issues from the economy to climate change to preventing Iran getting the bomb.

Speaking at Jewish Care’s annual dinner – which raised £5.1m – he said: “When we’re fighting terrorism and Islamist extremism are we better doing that out on our own or fighting together with our European partners. When Europe is discussing its attitude towards Israel do you want Britain – Israel’s greatest friends – in there opposing boycotts or do you want us outside the room, powerless to affect the conversation.”

Cameron spoke of his “love” of the country and described Jewish function as some of the most patriotic he’d attended. Invoking his predecessor Winston Churchill, he said the wartime leader chose to fight Hitler alongside allies, rather than operate alone, when he took the “greatest decision in our history”.

He also launched a blistering attack on the UKIP leader over the ‘Breaking point’ poster he unveiled last week as part of the campaign to leave the EU. It featured a line of immigrants passing through Europe and was condemned as having echoes of 1930s imagery of George Osborne.

“When I look at that poster which Nigel Farage stood in front of for the leave campaign I see the opposite of everything that makes our country great,” Cameron told the more than 1,000 guests at the Grosvenor House Hotel. “I’m proud that Britain is home to people who fled persecution – including those who fled the Nazis and from Russians pogroms. We should say to Farage and his campaign of division and intolerance ‘we don’t want your vision of Britain, we don’t want you’re selling, you’re not selling the kind of country we want for ourselves or our grandchildren – and I say we should vote decisively to reject it on Thursday.”

.@Number10gov attacks @Nigel_Farage poster as 'opposite of everything makes Britain great' at @Jewish_Care dinner pic.twitter.com/DlwSTCYc7S

While his diary was in a state of flux during the final build up to the referendum, Cameron drew huge applause for saying the dinner was one engagement he was “always going to keep”.

On the day the House Of Commons was recalled to pay tribute to murdered MP Jo Cox, the prime minister reflected on her husband Brendan’s call to oppose hate in her memory.

Reflecting on the rise of anti-Semitism, he said: “I hate that this scourge has returned to this world and specifically to our country. I promise wherever we see antisemitism – from politicians who should know better to abusive graffiti daubed on synagogues and homes – I will do everything I can to drive it out of this country. For as long as I’m prime
Minister you’ve got that extra £10m I promised to CST every year for as long as necessary.”

In a wide-ranging speech to an audience that included new Israeli ambassador Mark Regev, he also hailed Israel’s transformation from “dessert to city” as “One of most remarkable stories of the modern democratic world” and reiterated that his commitment to her security is “non-negotiable”.

“I will always stand up for right and obligation of Israel to defend its citizens – a right enshrined in international law, in natural justice and in fundamental morality. I’ll never stand by when people talk about boycotts or Israel comes under attack from rockets or terror tunnels.”

Cameron heaped praise on the staff and volunteers of Jewish Care as the ‘best of Jewish and the best of British. 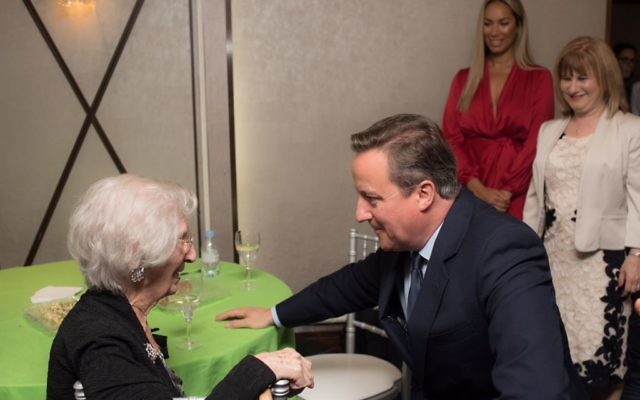 The Prime Minister meets Jewish Care’s Stepney Community Centre member, Amelia Finger, or Milly who is 99. Milly lives in the East End and relies on the Jewish Care mini bus to take her to the Centre. (Credit: Blake Ezra Photography)

‘I love you. All of you individually as I have a referendum to win. But I love Jewish Care and all you do. You don’t leave things to government. You help communities . You bring people together to play their part. That is the big society in action.”

The event included a campaign video featuring three service users including 99-year-old Millie – who said a Jewish care club had given her a lifeline to get out and socialise. Cameron described her as a “complete inspiration” after a meeting ahead of his speech.

.@Number10gov to @Jewish_Care dinner: 'You are the best of Jewish and the best of British' pic.twitter.com/aT4NTYTWtL

Former X factor winner Leona Lewis, who donated her time to perform at the event, said she felt “honoured and privileged to be part of such a special eveing and meet some of the inspirational people that are assisted by Jewish Care”. She dedicated a song he composed for her parents to the charity.

Chairman Stephen Lewis announced plans to submit an application for a new care campus in Redbridge. He stressed that £15m must be raised annually to continue its work, with an additional £4m required by 2020.

Jewish Care President and Labour peer Lord Levy – who hailed the PM as “a true friend to our community and our beloved state of Israel” – said: It was a truly special evening. A night that showcased the vital work of Jewish Care and celebrated the way we as a community come together to provide care and support to those who need it.”