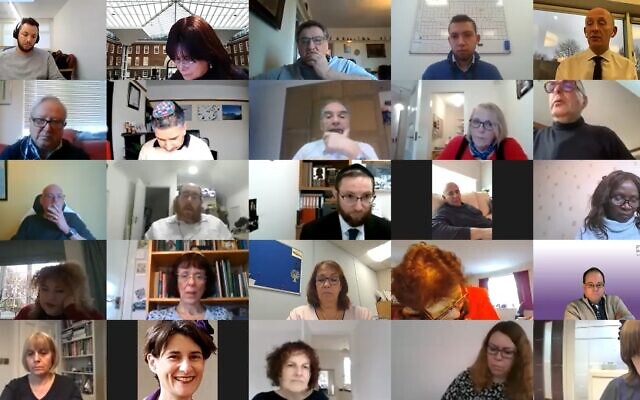 Screenshot of the meeting with Martin Machray and 17 communal organisations

Jewish care homes across the capital have been assured that residents and staff will be vaccinated next month following fears of delays.

Martin Machray, the capital’s Covid-19 Incident Director, addressed representatives of all synagogue movements and major charities on Monday, in a virtual meeting organised by the London Jewish Forum.

This comes amid concern from Jewish social care groups that vaccine doses could only be delivered in hospitals or at specific locations with facilities to store them – and could not be separated from a larger batch of almost 1,000 doses.

As a result, Brent-based care home Jewish Choice was told last week it may have to wait until mid-February to gets its residents and staff jabs.

Responding to concerns raised by Jewish Care during the call, Machray said “successful” trials last week mean authorities “can safely move the vaccine into residential spaces and do a vaccination programme for staff and residents”.

“We’ve only got small quantities of vaccines in London and we will start this week in one or two care homes with a view of starting in the other care homes” in the new year.

Gaby Wills, Director of Care Services for Jewish Care said: “It was very helpful to be given clarification on the availability of vaccines in care homes and we were encouraged to hear that the roll out of the vaccine is likely to pick up in care homes early in the new year.”

Paula Peake, Chief Executive of Jewish Choice told Jewish News that while “the meeting did present a little more light at the end of the tunnel.. nothing definitive was said – and certainly nothing as definitive as the Government has been saying, in positioning care homes as a top priority for the vaccine.

“The frustration we and our relatives have is that others elsewhere in the community and even in the near locality have received the vaccine before Christmas, but some of the most vulnerable in Brent have not and we don’t know when that very real need might be addressed.”

She added, that “while not confirmed, we have heard from another source that vaccines may be rolled-out to us in the second week of January.”

The chief nurse also sought to allay fears about the kosher status of the jab, insisting it is “completely synthetically made” and nothing about it is “un-Kosher.”

He dismissed rumours regarding its impact on fertility raised by strictly-Orthodox groups, saying: “There is an awful lot of nonsense” spoken.

“We have no evidence that this impacts fertility at all. We do suggest that if you are breastfeeding or pregnant you shouldn’t have it as we don’t know if it is safe enough to be given in those circumstances. This is just a precaution rather than because it causes problems.”

Following the government’s decision to move London and large parts of the south east into Tier 4 restrictions, a third of United Synagogue communities announced temporary closures.

When asked if rabbis should deter older members from going to shul, he said it’s a “really difficult one” and a matter of personal choice.

This week, Sir Ben Helfgott, 91, became the latest Holocaust survivor to get vaccinated. In the last two weeks, Eve Kugler, 89, Harry Kessler, 90, and Lily Ebert all received the first doses.

Co-Chairs of the London Jewish Forum, Andrew Gilbert and Adrian Cohen, together with Director Daniel Kosky, said: “We were delighted to bring together the leadership of London’s Jewish community to get an exclusive briefing for our community from London’s Chief Nurse”.

As of the week ending 18 December, there had been 616 coronavirus-related deaths in the community.