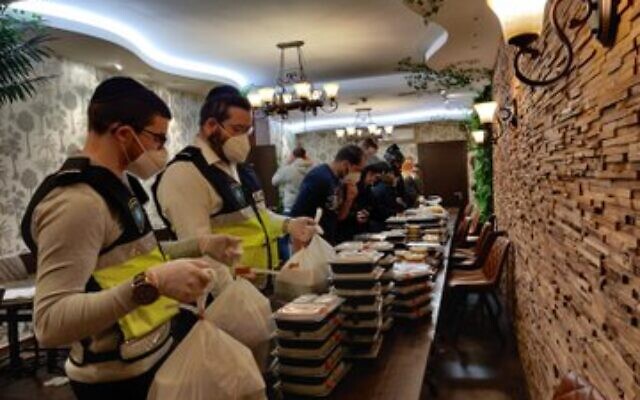 The Orthodox Jewish community in north London has established its own internal welfare system for families struggling financially or logistically amid the coronavirus pandemic, with initiatives across the borough of Hackney.

A Yiddish-speaking helpline has been set up, an upmarket kosher restaurant is cooking up free meals for the isolated and unwell, schools and yeshivas have closed and a community not known for its social distancing is largely observing the rules.

Interlink, a Charedi charity, said this week that the helpline had “rapidly become a very valued and helpful facility, because the majority of households do not have internet access and the NHS 111 line is over-burdened”. 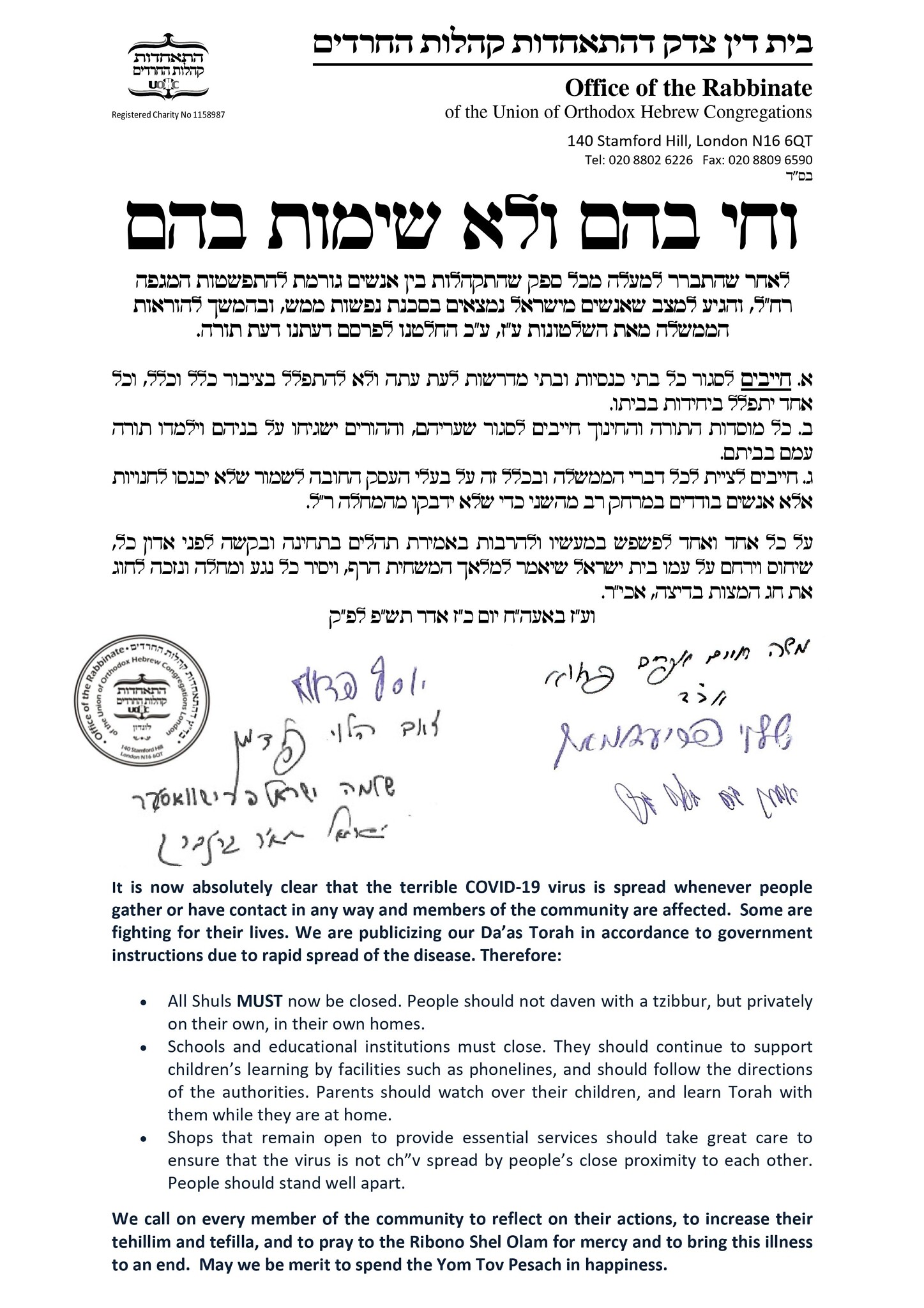 Interlink said these were “frontline organisations” but the helpline was “not intended to replace emergency or medical services,” adding: “Some questions will be specific to the community… People are not likely to ask 111 if they should be going to shul.”

Queries have so far ranged from self-isolation to the availability of tests to the definition of a “persistent” cough, but organisers said the primary purpose was “to ensure that people who are ill or need to isolate can get food, medicines and other necessities, via a group of volunteers,” of which there are now hundreds.

“There are very clear protocols and safeguards in place for these volunteers, for instance they do not go into people’s homes, any contact is on the doorstep, and if additional needs are identified, they are signposted to agencies that can help, such as Bikur Cholim.” 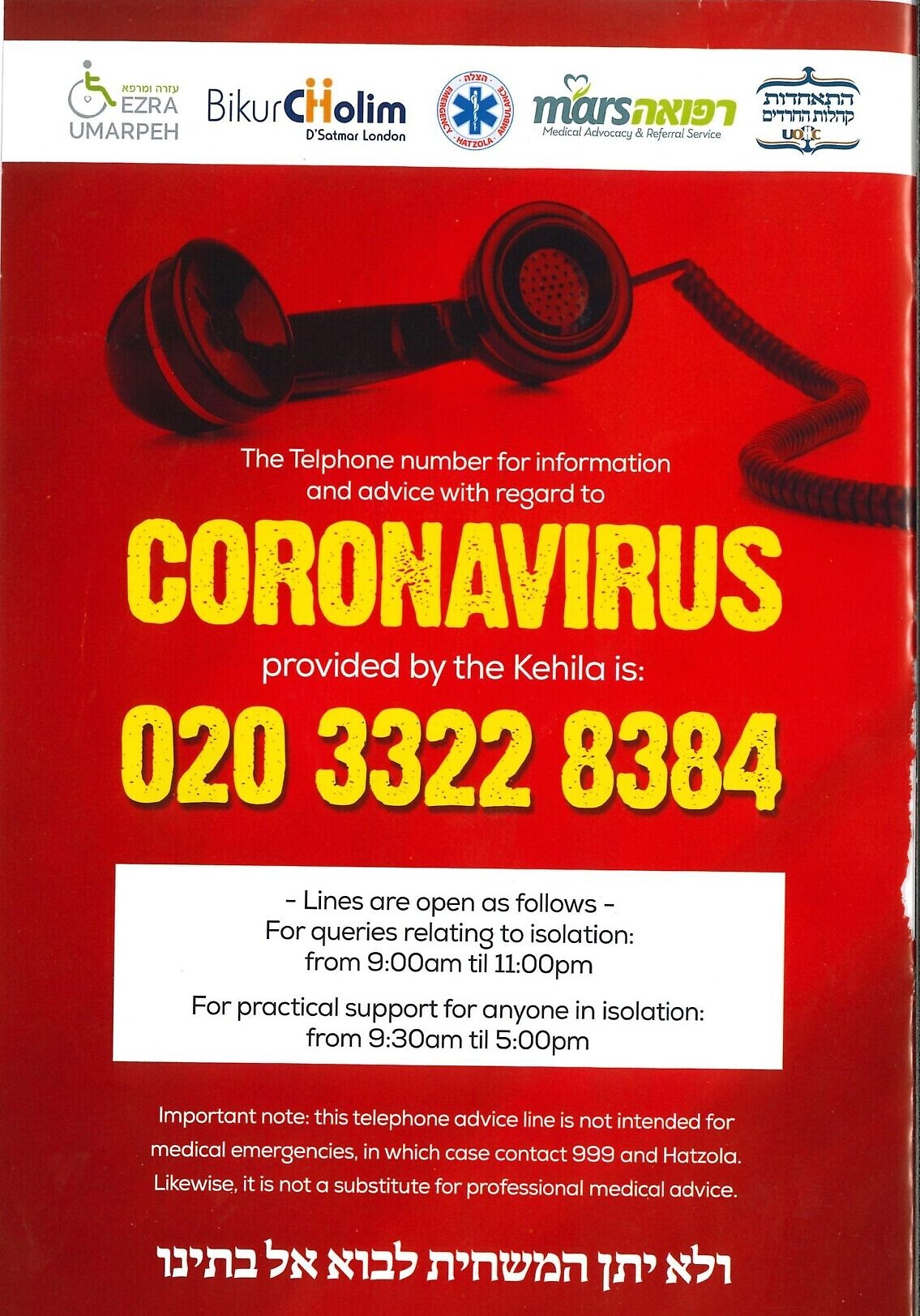 Rabbi Avroham Pinter, the principal of a large girls’ school in Stamford Hill and a UOCH trustee, said “people are listening [to social distancing rules] in the main, but there’s always going to be someone who thinks they know better”.

He said all 310 of his students were now at home, including his grandchildren, explaining that the school had offered to host children of key workers but no families had taken it up.

“The closure of schools and childcare obviously has a massive impact, affecting the majority of households,” said Interlink. “There has been a huge effort led by Chinuch UK to keep schools updated and to help schools set up telephone communications systems for their school community, since the majority will not be accessing online resources or classrooms.

“Many schools now have this up and running, with teachers preparing to give live classes in a phone ‘classroom’.  We are also setting up an online platform for school sharing, home-teaching resources etc.”

The charity added that it was “very important to us to be able to continually provide schools with guidance and information about developments,” a sentiment echoed by Pinter, who sits on the UOCH education committee.

Like the rest of the country, the shock of the economic shutdown has had a huge effect on financial life in the Orthodox community, they said, with plush restaurants now turning their kitchens over to feeding those less able to stock up during self-isolation.

Asado Mediterranean Bistro, at the base of the kosher Park Avenue Hotel at Clapham Common, near the historic Stamford Hill junction, began offering “free meals to those who are unwell or isolated due to the coronavirus” last week.

The restaurant only recently underwent an expensive refurbishment after being bought by two brothers. Usually serving such dishes as Moroccan beef cigars, lamb tagine, T-bone steak and duck leg, it is described as “the first white tablecloth Glatt Kosher dining experience in north London” and is certified as kosher by Kedassia.

“It’s obviously a difficult time,” said Levi Shapiro, director of the Jewish Community Council, based in Stamford Hill. “People can’t go out to get food, they can’t cook, so it’s incredible that kosher places are giving free meals to families and patients in hospitals. I hope others do likewise.”

Interlink said “like in all parts of society, the economic impact is a cause of real anxiety and stress.” Pinter said Agudas, a charity advising the Orthodox community on benefits, was currently “overwhelmed,” adding that “many” in the community were self-employed.

“They fall through the cracks in terms of government funding, so we’re looking to try to set up a community relief fund for these people, especially with the extra costs for Pesach.”

Interlink added that the relief fund would “help people who have simply run out of funds as a result of the rapid dry-up of their business income or work… As well as losing earned income we are all worrying about the impact of our donors and funders taking a hit and being less able to support our work”.

Pinter said there was “a lot of concern” that donors themselves were “now feeling the pinch and struggling,” adding: “It’s a problem. Fundraising events have come to a complete standstill. It’s a challenge but people are rising to it. Those who can afford to give more are giving three times as much.”

He added that the main concern was the NHS getting overwhelmed. “We have already had three members of Charedi communities die – two in Golders Green and one in Leeds. If the NHS loses control people will die simply through lack of response.”