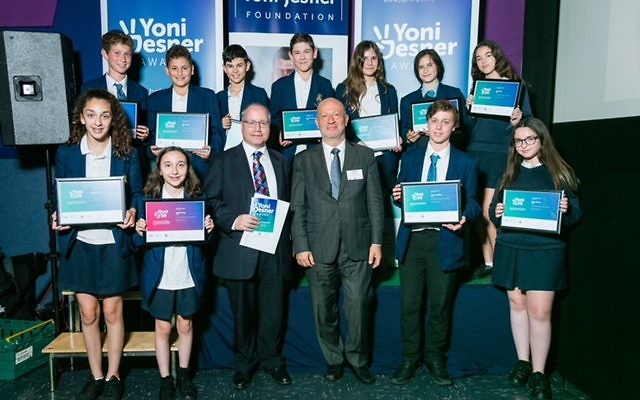 Award recipients from JFS and new Board of Deputies Vice President Edwin Shuker, who presented the students with their certificates

The Chief Rabbi has called on young Jews to be role models in the mould of Yoni Jesner, the Jewish gap year student killed in a terror attack while in Israel, whose donated organs went on to save several lives.

Chief Rabbi Ephraim Mirvis made the comments in front of a packed auditorium while addressing more than 100 graduates at this week’s Yoni Jesner Awards ceremony, organised by JLGB.

He said: “Boys and girls, I’d like to ask something from you, that this evening should not be a graduation, the conclusion of what you have done for your awards, but rather the beginning of an entire lifetime through which, giving selflessly will always come naturally to you.”

He added: “I’d like to ask each and every one of you, please, try to become role models yourselves – people who will inspire others, people who set an example for others to follow – you will be just as Yoni Jesner was.”

At the ceremony, the youngsters were presented with certificates for service to their community by special guests including members of Yoni’s family, new Board of Deputies Vice President Edwin Shuker, and Rabbi David Meyer, head of Jewish education umbrella group PaJeS.

The awards were presented in memory of Yoni, a passionate volunteer from Glasgow who was killed in a bus bomb in Tel Aviv in 2002, aged 19.

Yoni’s mother Marsha said: “I’m so proud to associate Yoni’s name with this project, because this way of giving is truly what Yoni was all about. You’ve shown that not only you have it in your heart to show that you do care, but also to see it right through to the end.”

The Foundation used the occasion to announce scholarships for Avishai Marcus and Tsipporah Lax, recognised as “exceptional” students wishing to spend a year in Israel before commencing their university studies.