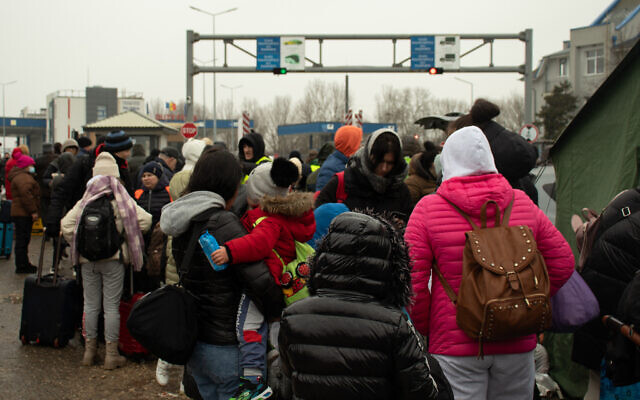 Jewish community members have hit out at the government’s handling of the Ukrainian refugee crisis, calling on Boris Johnson to allow many more evacuees into the country as the Russian invasion continues.

The letter, coordinated by the Jewish Council for Racial Equality (JCORE), was produced in response to news on Monday that the UK had granted visas to only 50 Ukrainian refugees.

By Tuesday the official number had increased to 300, but according to JCORE this means the UK has provided safe passage to just 0.015% of the 2 million refugees displaced by the conflict.

Highlighting how many in the Jewish community are descendants of refugees who fled to the UK in search of sanctuary, the letter expressed dismay at the “government’s seeming inaction in response to those fleeing persecution and conflict today”.

“We in the Jewish community are watching with horror the dreadful scenes and humanitarian crisis in Ukraine, following Russia’s invasion,” the letter read.

“Images of refugees desperately attempting to escape the country, in search of safety, are particularly resonant to us.”

The signatories said they were “appalled” by what they described as “the government’s seeming inaction in response to those fleeing persecution and conflict today.”

They also described the situation as “deeply shameful’.

On Wednesday Boris Johnson ruled out dispensing with checks on Ukrainian refugees attempting to flee to the UK from their war-ravaged country, telling MPs this would “expose this country to unnecessary security risks.”

Liberal Democrat leader Ed Davey told the Prime Minister that “in the months before World War II the UK took in more than 60,000 Jewish refugees fleeing Nazi persecution” in the Commons on Wednesday.

Davey also noted that thousands of Ugandans expelled by former leader Idi Amin, Tamils escaping civil war, Bosnians, and Syrians had been welcomed into the UK but the Home Office was now “turning away hundreds of Ukranian refugees escaping Putin because they did not have the right paperwork.”

He then added: “Can you Prime Minister not see this flies in the face of this country’s proud tradition of providing sanctuary?”

But responding, the PM insisted that what Davey had said about the UK was “completely wrong” saying “no-one has been turned away.”

There has been concern from across the Jewish community about the limited number of Ukrainians being admitted into the country.

“As the numbers increase so does the vulnerability of the refugees – these are people who do not have contacts in the EU or resources to support themselves. We cannot sit by and watch this humanitarian crisis unfold without appealing to you and the UK Government to provide a humanitarian visa route,” they wrote.

“We welcome the current offer of the family scheme and the new sponsorship plan, but we fear it does not go far enough – and certainly does not yet equate to the “very generous” response which Prime Minister Johnson promised eight days ago.

“As you will have seen first-hand, the majority of those fleeing are women, children and the elderly and their needs are only going to increase as the war continues. World Jewish Relief, the people we assist, and the wider Jewish community believe we need an additional response.”

Kindertransport refugee Lord Alf Dubs who has campaigned for refugees all his life, criticised the UK’s response, which was accused of initially being too restrictive.

Asked what Britain should do, the politician who arrived in 1938 on the kindertransport from Czechoslovakia, told Jewish News, “I’d like to first of all move much faster”.

“The more generous response from Ukraine’s neighbouring countries and indeed, from countries like Ireland and Portugal, puts us to shame.”

He spoke out against Home Secretary Priti Patel’s plans, saying the UK “still want visas, we still want biometrics, which will make it difficult” for people fleeing the war.

“Unless the government contradicts its own legislation before it’s even been passed in parliament, I don’t quite know how they’re going to handle it.