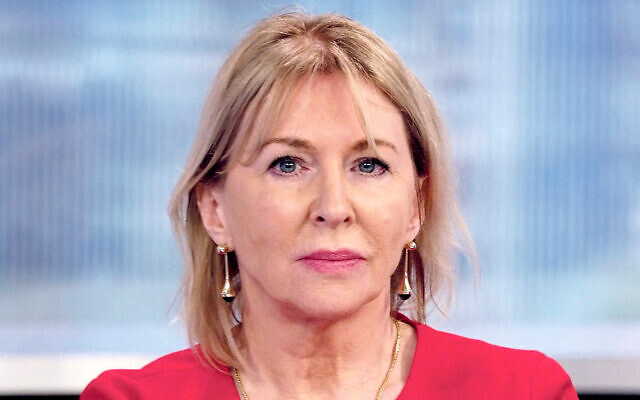 Culture Secretary Nadine Dorries has written to BBC Director General saying she wished to “understand” the broadcaster’s actions in response to criticism by the Board of Deputies and other communal groups over its report on the Oxford Street Chanukah bus incident.

In a letter sent to Director General Tim Davie, Dorries accepted it would be “inappropriate” for the Government to “take on view” on the case as the corporation is “editorially and operationally independent.

She then wrote: “The scenes on the bus were obviously distressing not only for those involved but also the wider Jewish community. I’m aware the police are investigating the incident and therefore this may have affected how you have approached addressing the concerns but clearly the BBC’s coverage of 29 November is a particularly sensitive issue.

“Whilst it would obviously be inappropriate for the Government to take a view on the details of the case, as the BBC is editorially and operationally independent, and responsibility for regulation sits with Ofcom, I would like to understand the actions the BBC has taken so far in response to the concerns raised by the Board of Deputies and how you intend to resolve the issue in a suitably timely manner.

“You will know my concerns about the speed of the process which I asked officials to communicate to the BBC.”

The letter was sent as the BBC confirmed its Director General had instructed that this process “is accelerated to the executive complaints unit.”

The BBC said the unit was “editorially independent from news and will ensure complaints are fully responded to as swiftly as possible.”

The JC reported that the letter continued by stating: “It is crucial that the BBC can be properly held to account for the fulfillment of its Mission and Public Purposes as set out in the Charter, including through a fair and effective complaints process.I expect the mid-term Charter to consider whether this is currently the case.”

Dorries intervention comes ahead of a meeting this month between Mr Davie and the Board of Deputies later this month.

Jewish News revealed this week that the Board were prepared to take the issue to Ofcom, if the BBC did not apologise for a December 2 report published on its website.

The same claim, that a passenger at used the words “dirty Muslim” was also broadcast by BBC London.

An expert commissioned by the Board concluded the passenger had used Hebrew words, so could not have uttered the reported slur.

But the BBC say “a number of Hebrew speakers” have confirmed their reporting of the slur is accurate.