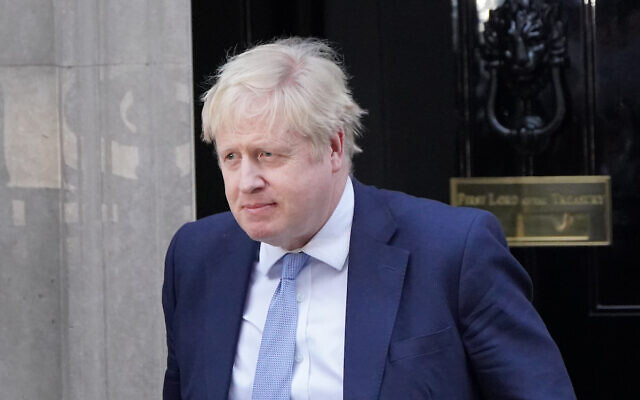 The Conservative Party is facing questions over a £450,000 donation made by its Israel born former treasurer Sir Ehud Sheleg, over claims the money ultimately came from a former senior Kremlin politician.

The donation, which was made in 2018, was, according to a report in the New York Times, flagged to the National Crime Agency (NCA) last year.

Sheleg was appointed co-treasurer of the Tories under Prime Minister Theresa May, remaining in the post under Boris Johnson, before leaving his post last year having donated £3.8million to the party.

It is claimed Barclays Bank believed the donation actually came from the Russian bank account of Sheleg’s father-in-law Sergei Kopytov.

Kopytov, a refugee in the Czech Republic, having had to flee Ukraine due to the invasion, had worked as a civil servant in the Minister of Internal Affairs, under pro-Russian president Viktor Yanokovych, before being a minister in the Kremlin-backed Crimea government prior to annexation.

When asked about the report, Boris Johnson told Sky News on Thursday that all party donations had been registered “in the normal way”.

Labour’s Chris Bryant, who chairs parliament’s standards committee, said the Tories “should give the money back and apologise for putting themselves in hock to Russian money”.

The MP Stephen Kinnock had previously told MPs in a Commons debate he had wrtten to Brandon Lewis, the party chairman at the time, asking him to look into Sheleg’s donations.

A Conservative Party spokesperson said they had not been made aware of NCA action and said that every donation received “comply fully with the law.”

A report in the New York Times on Thursday said an alert in January 2021 had claimed Kopytov transferred £2million to an offshore account linked to a Sheleg family trust via a series of seemingly inactive accounts belonging to Sheleg and his wife, Kopytov’s daughter Liliia Sheleg.

About a month later, the money was moved to a UK account shared by the couple, and a day later, the donation of over £450,000 was made to the Conservatives.

According to the New York Times, the alert by Barclays Bank stated: “We are able to trace a clear line back from this donation to its ultimate source.

“Kopytov can be stated with considerable certainty to have been the true source of the donation.”

It was unclear why the transaction, which had taken place in 2018, was the subject of an alert in 2021.

In a statement Kopytov claimed he was not a Russian ally and have pointed to the fact his assets were nationalised after Crimea was annexed.

But strict rules in the UK by the Electoral Commission state donors must be on the UK voting register to be a “permissible source” of funding.

In a statement sent to the New York Times via Sheleg’s lawyer, Kopytov said: “I have no interest in British politics whatsoever,” describing himself as a Ukrainian citizen.

“Any donations made by my son-in-law to a British political party have nothing to do with me or with the money I gifted to my daughter.”

The Electoral Commission said it was not investigating Sheleg and was unaware of any alerts over his transactions.

Other sources told Jewish News Suspicious Activity Reports (such as the one made by Barclays) are not uncommon (the annual figure is in excess of half a million) and are no evidence of wrongdoing.