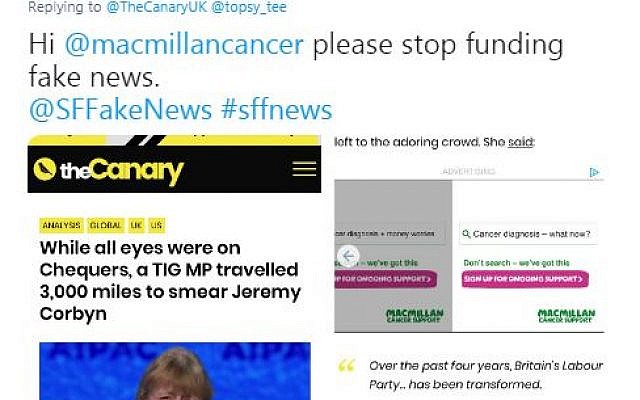 Screenshot from Twitter, showing the SFFN campaign urging Macmillan Cancer Care to remove its advert from the Canary.

A hard-left news site has been forced to downsize after anti fake-news activists compelled advertisers to blacklist it.

The Canary informed users its existing system “no longer works”, forcing it to take a “long, hard look” at how it works.

It comes after activists from the group ‘Stop Funding Fake News’ (SFFN) wrote to brands advertising on the Canary, urging them to stop funding the site.

The Canary said its former model meant “relying on social media to drive traffic which generates advertising revenue… Facebook and Google changed their algorithms, meaning fewer people now see our articles. And people who don’t like our politics have encouraged our advertisers to blacklist us”.

Claiming the campaign has “come at a cost”, the site claims it had been “smeared with accusations of antisemitism by those who’ve weaponised the term for political ends”, but that it is simply “against the actions” of Israel.

The Canary added: “In the current post-truth political landscape, accusations stick – despite the facts to the contrary. That means advertisers are susceptible to pressure from political Zionists, and our advertising revenue is under fire.”

The site’s newsroom will now be “much leaner and more focused”, adding that “due to financial restrictions” writers will have less opportunity  to pitch their own stories.

SFFN told Jewish News “We are delighted to play a part in forcing them to downsize and making them loss-making.”

It added: “This shows that people can change things. By simply letting advertisers know where their money is going, our Twitter followers helped make it far less profitable to spread hate online”.