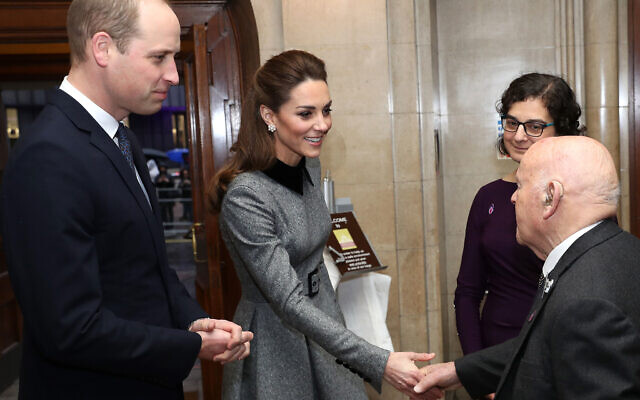 The Duke and Duchess of Cambridge meeting Sir Ben Helfgott during the UK Holocaust Memorial Day Commemorative Ceremony at Central Hall in Westminster, which was broadcast live on the BBC. (Photo credit: Chris Jackson/PA Wire via Jewish News)

Tributes have been paid to the “extraordinary contribution” of Shoah survivors to mark the first-ever international Holocaust Survivor Day.

The event was established after a call for a day where survivors can “celebrate their lives they built in response to the Holocaust,” was published in the Jerusalem Post.

It is being celebrated today just before the birthday of Marian Turski, an Auschwitz survivor. As Mr Turski’s birthday falls on June 26, which is Shabbat this year, it was decided to hold the event two days early.

Among those paying tribute to survivors for representing “the best in all of us,” was Prime Minister Boris Johnson. “Pleased to support the first #HolocaustSurvivorDay and to honour the extraordinary contribution of Holocaust survivors to the UK and the world,” he said.

Lord Pickles, the UK’s Special Envoy for Post-Holocaust issues, added: “Today is the first International Holocaust Survivors Day. We remember with gratitude the contribution Survivors made to rebuild the UK after WW2.”

Organisations such as the Holocaust Memorial Day Trust have marked the occasion by sharing details of the remarkable stories of survivors, such as Sir Ben Helfgott, who survived slave labour and several concentration camps.

“He went on to become captain of the British Olympic weightlifting team. Today Sir Ben works tirelessly in the field of Holocaust commemoration and education,” it said.

The UK Holocaust Memorial highlight the story of Ben’s sister, Mala Tribich. “Mala Tribich MBE was liberated from the Bergen Belsen concentration camp by the British Army,” it said.

“On discovering her brother Ben Helfgott had also survived she joined him in England in March 1947.”

Meanwhile, the Holocaust Educational Trust shone a spotlight on the story of survivor Harry Olmer among others, who was recently named Britain’s longest-serving dentist.

“Harry Olmer BEM came to the UK with a group of child survivors known as The Boys,” it posted. “Despite knowing no English when he arrived, Harry completed his Highers exams in 1947 and went on to be a dentist.”