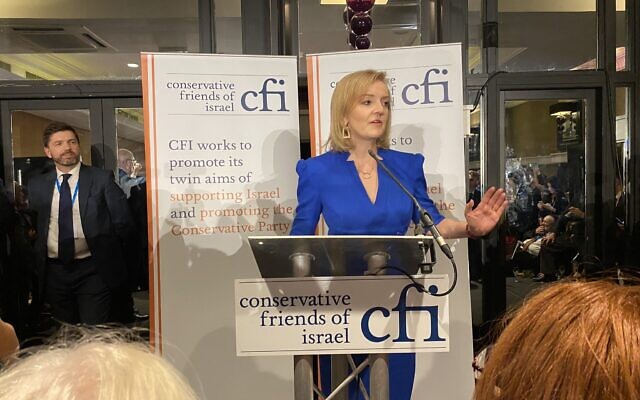 Liz Truss speaking at CFI's event at the Conservative Party Conference 2021 (Credit: Board of Deputies)

New Foreign Secretary Liz Truss has vowed to develop a “deeper relationship with Israel” in what she said were “three key areas”  in a speech delivered to a packed Conservative Friends of Israel reception.

Speaking to a capacity crowd at Manchester’s Midland Hotel, Truss outlined how trade, technology and security were the three areas in which she was looking to expand as part of a “full fat” post-Brexit deal with Israel.

On in a promise which delighted attendees to the Tory Conference fringe event, Truss, who is also Minister for Women and Equalities, said: “I have difficult issues in my in-tray as Foreign Secretary including stopping Iran becoming a nuclear power.”

But the main focus of Truss’s talk was to build on her vision of the “network of liberty” the UK wants to build around the world, including with Israel of whom she said “there is no closer friend and ally” to the UK.

She added there were “three key areas we want to develop a deeper relationship.”

Trust continued that “first of all there is trade.”

She praised the involvement of International Trade Secretary Anne-Marie Trevelyan who she said was ” determined to pursue the trade deal with Israel.”

Truss added that EU rules had restricting links before but she said ” the new Israel/Uk trade deal will be a full fat deal from technology to services to agricultural goods.

“It will be a fantastic trade deal.”

Turning to technology she said:  “We know there is a global battle for technology between those of us in the free democratic world who want to see an open use of technology. 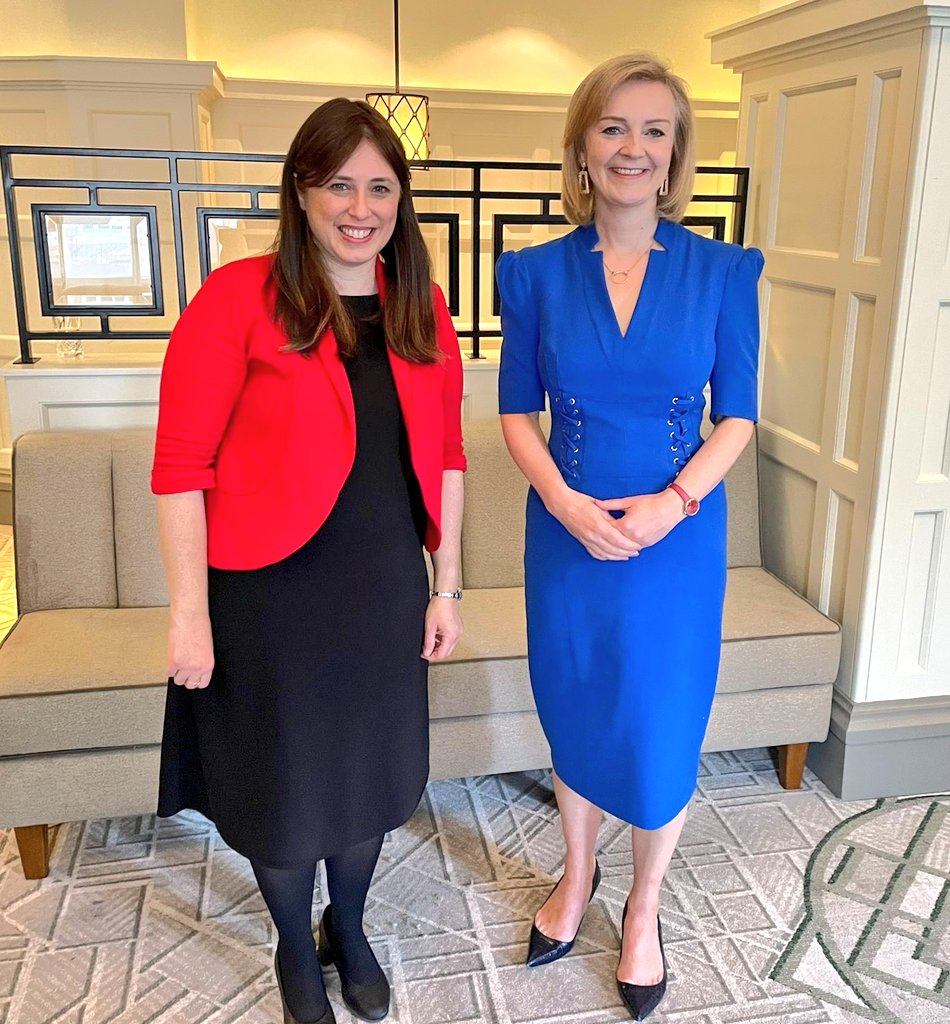 Tzipi Hotovely and Liz Truss pose together at the Tory conference

“We need a much deeper technological relationship with Israel.”

The third area of planned growth was with security, explained Truss. She spoke of her trip to Israel which she saw the “visible presence of security operation” already started between the Jewish state and the UK.

Truss said there was a “determination” within the UK to “work with our allies to defend trade and enterprise and defend our security.”

She said the “best way to challenge malign actors and authoritarian regimes around the world is through strength and building economic strength”with like-minded nations.

Briefly turning to Iran, she said: “We are working night and day with our allies around the world” to prevent the regime in Tehran from becoming a nuclear power.”

Earlier Israel’s ambassador to the UK Tzipi Hotovely had sung the praises of those attending the CFI reception on Tuesday saying “you usually say ‘your heart is in the right place’ – but let me tell you all ‘your minds are in the right place.’ 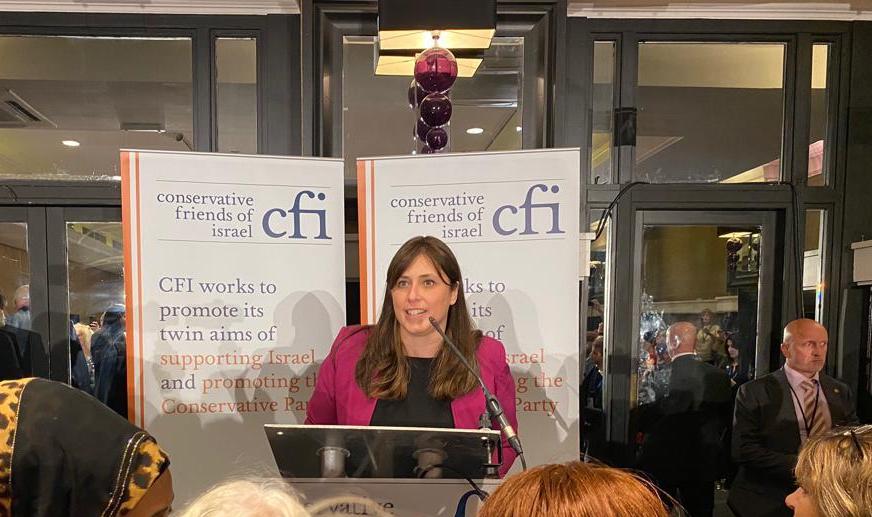 Tzipi Hotovely speaking at CFI’s event at the Conservative Party Conference 2021 (Credit: Board of Deputies)

She also touched on what she said would become “a whole new chapter in bilateral relations between Israel and the UK.”

The ambassador added: “We have a wonderful opportunity with this wonderful British government and we are going to take it.”

Hotovely then said: “We are working on a new trade agreement, cooperation in fighting all the terrorist organisations with the Jihadi ideologies led by Iran.”

She promised also to work on proscribing Hamas. The same message was echoed by CFI’s parliamentary chair Stephen Crabb when he spoke.

Health Secretary Sajid Javid repeated his famous “Get stuffed” speech in which he revealed he had always got his way with defending Israel, and he vowed to visit again in his new role when he could. 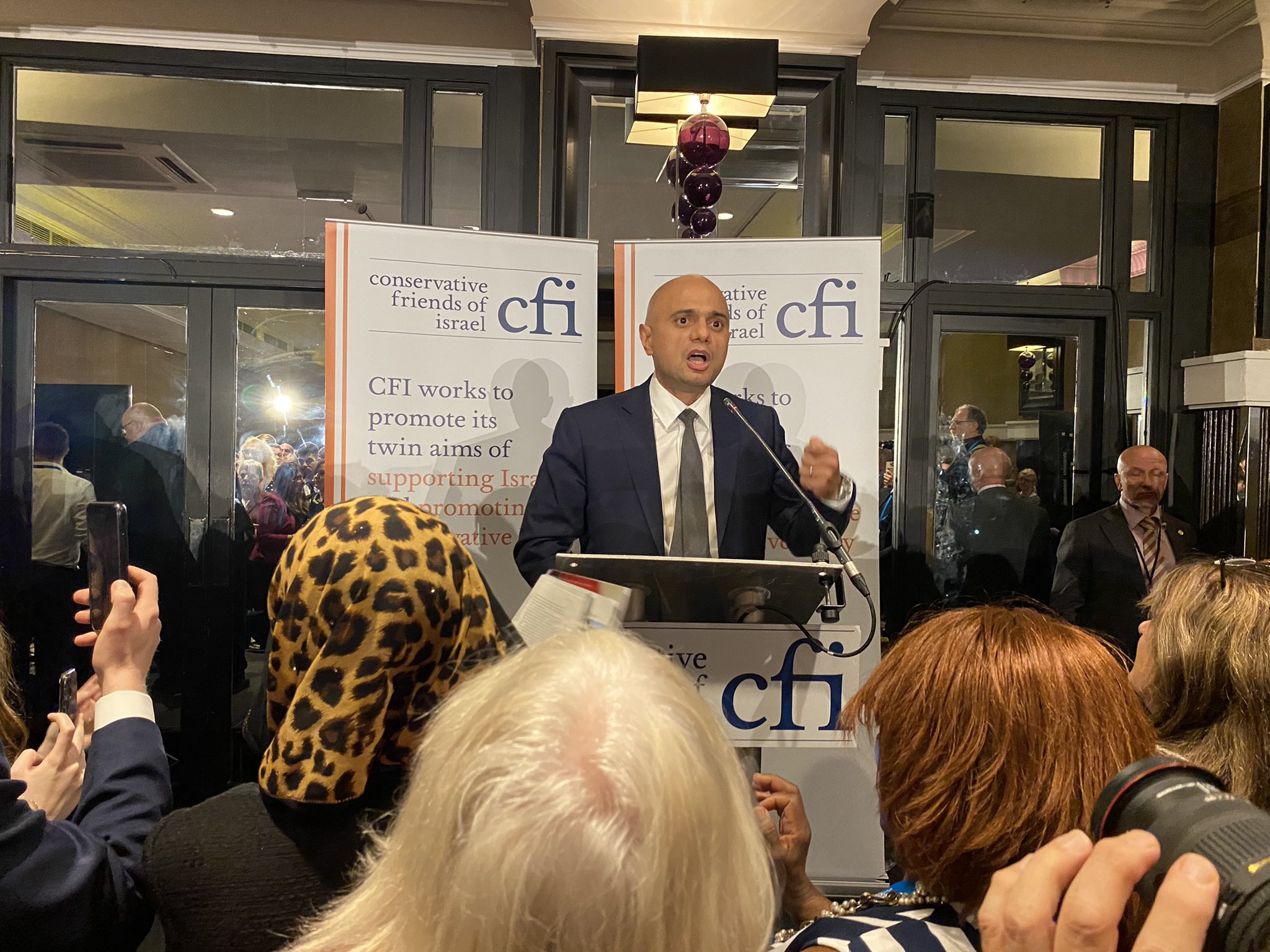 Said Javid speaking at CFI’s event at the Conservative Party Conference 2021 (Credit: Board of Deputies)

Lord Eric Pickles hosted the evening, which also saw Lord David Wolfson address the crowd in both Ivrit and English.

One of the loudest cheers of the evening was for Board of Deputies President Marie van der Zyl, who thanked the Conservative Party for their support both for the Jewish community and for Israel. On Monday Hotovely had attended at event hosted by the Jewish Representative Council of Greater Manchester & Region (JRC) and The Jewish Leadership Council (JLC) ,

She stressed her desire for increasing her own engagement with British Jews and particularly with younger members of our community.