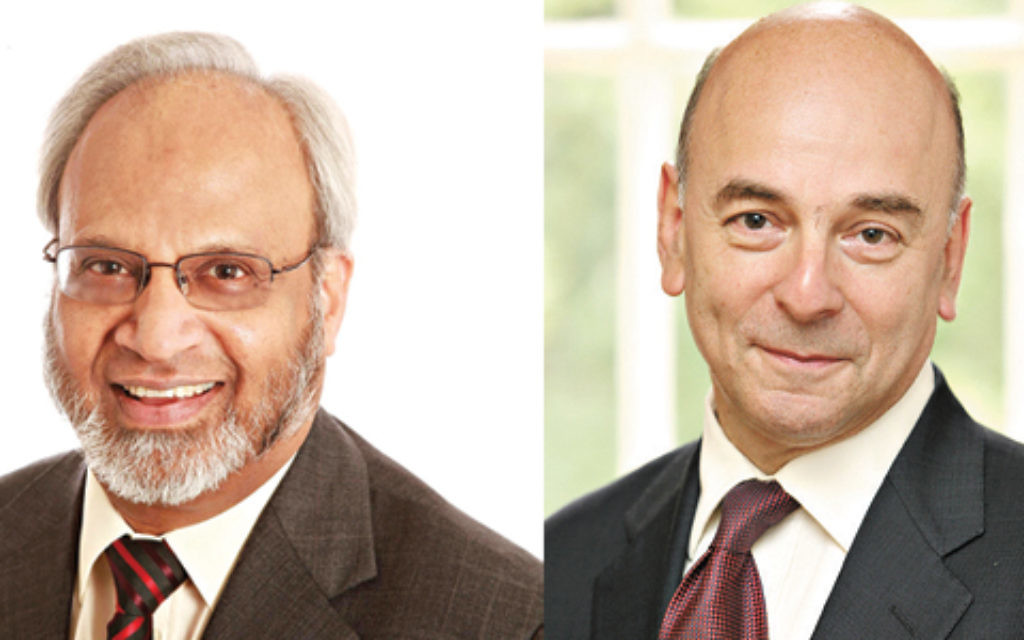 Two former presidents of the Board of Deputies have called on the current incumbent to resign amid a backlash over its joint statement with the Muslim Council of Britain and claims that his organisation had failed to do enough in response to the recent Gaza conflict.

The BoD’s Vivian Wineman, right, has provoked a backlash over his joint statement with MCB’s Dr Shuja Shafi about the recent Gaza conflict.

The two bodies last week released their first statement together on the Middle East and the impact of the crisis here, with both condemning anti-Semitism and Islamophobia and stressing the need to “export peace” rather than “import conflict”.

While some rounded on the Board for engaging in such an initiative with an organisation from which it previously severed relations over its boycott of Holocaust Memorial Day, criticism focused on the inclusion of a line describing the targeting of civilians as “completely unacceptable and against our religious traditions”.

While many would hve seen this as thinly-veiled condemnation of Hamas, the MCB insisted it took the line to refer to both sides in the conflict.

Now pressure on Vivian Wineman has been ratcheted up with a resolution initiated by former vice-president Jerry Lewis – with the support of past presidents Lionel Kopelowitz and Eldred Tabachnik – calling for him to step down “after one of the most disappointing and depressing periods in the Board’s otherwise illustrious history”.

The resolution – which Lewis said would “no question” receive the necessary 20 backers needed to reach a future plenary meeting – complains of the failure to refer “the issue of the changing relationship between the Board and the MCB” to its defence division, which deals with interfaith matters, or executive. It also “notes the severe damage to the reputation of the Board this issue has caused whilst also embarrassing the wider Jewish community”.

It also claims the Government was engaged in a clear strategy of distancing itself from the MCB only to discover that the Board – through its statement – had effectively rehabilitated the MCB’s reputation”. While the Department for Communities and Local Government does not engage directly with MCB, Jewish News understands it broadly welcomes the joint statement.

The resolution also charged that the Board “has lamentably failed to deliver to the Jewish community the leadership required during a period of considerable stress both with regards to events in and around Israel and the subsequent increased levels of anti-Semitism in the UK”.

Supporters of the motion call on the president to “take the appropriate action and resolve that he should vacate the presidential chair forthwith to allow for an alternative leadership to take on the challenging task facing the community”. Semitism.

It’s not yet known who else will support the resolution, but Kopelowitz said he stood by his support despite agreeing to attend a meeting with Wineman tomorrow.

But former US president Simon Hochhauser, one of the US’s deputies, said he would not back calls for the president to go, despite acknowledging the MCB’s record led to “serious question marks”. He argued that the line on civilians was both “flawed” in its wording and “unnecessary” but added that the Board should be “congratulated for its work fighting anti-Semitism and for doing so with other communities”.

He also stressed the need for the Board to “hold the MCB to account” gong forwards, describing as “discouraging” the initial refusal of Secretary-General Dr Shuja Shafi to describe the daubing of a shul with ‘Free Gaza’ as anti-Semitic when asked in a Radio 4 interview. He later wrote on Twitter that it was anti-Semitic.

But Hochhauser said: “We should be pulling together as a community at a time like this rather than calling for leaders to resign.”

While acknowledging that the president could not run every decision by others, current US president Steve Pack suggested he would have expected consultation on such an important matter.

But describing the statement as a “bold and constructive step” whose advantages “outweigh the disadvantages”, Liberal Judaism chair Lucian Hudson said: “We can choose to let it (the Middle East conflict) define our relationship or we can build our own relationship founded on the many values and experiences we share in common. LJ chooses the latter.”

Commentator Melanie Phillips said the episode had shown the Board was “not fit for purpose”, claiming it had “enabled the MCB to claim that the UK’s Jewish community leadership has condemned Israel for targeting civilians”. She added it was “astounding” that the Board had any dealings with the MCB – despite the fact it and other communal bodies deal with the MCB on issues of mutual concern like religious slaughter.

Professor David Katz, who is also a deputy, has worked with Dr Shafi on medical matters of interest to both communities for years before he took up his current post at the MCB – and has continued to do so since. Though he wouldn’t be drawn on the joint statement, he said “we have to cooperate in our approaches from within a very secularised society”. In July, he, representing the Office of the Chief Rabbi, attended an interfaith meeting on the proposed assisted dying legislation, along with Dr Shafi.

Board vice-president Alex Brummer said it was sensible “at a time of high tension in the Middle East and Gaza to reach out to British Muslims and prevent conflict from spreading to the UK”.

But addressing the wider issue, he said he believed the Jewish leadership overall “could have done better with our communication with a nervy Jewish community during the crisis. The focus was largely on behind the scenes political and media lobbying rather than community itself.”

Fears could have been addressed, he argued, with a series of sessions with academics and other experts on topics like boycotts and anti-Semitism.

Insisting he had “no intention” of resigning, Wineman said staff “had been working their fingers to the bone” alongside other communal bodies. He added: “We’ve been lobbying politicians, speaking to the media, fighting boycotts, we’ve meetings set up with the BBC and we’re seeing the British retailers consortium. We’re better at taking action than telling people about it.”

He added: “If you want to fight anti-Semitism you have to speak to people outside the community, in particular the Muslim community.” He said he had “no intention” of resigning.

A senior community source said: “It doesn’t seem right to criticise the leadership for not doing enough when the government has been extremely supportive to the Jewish community and Israel.”