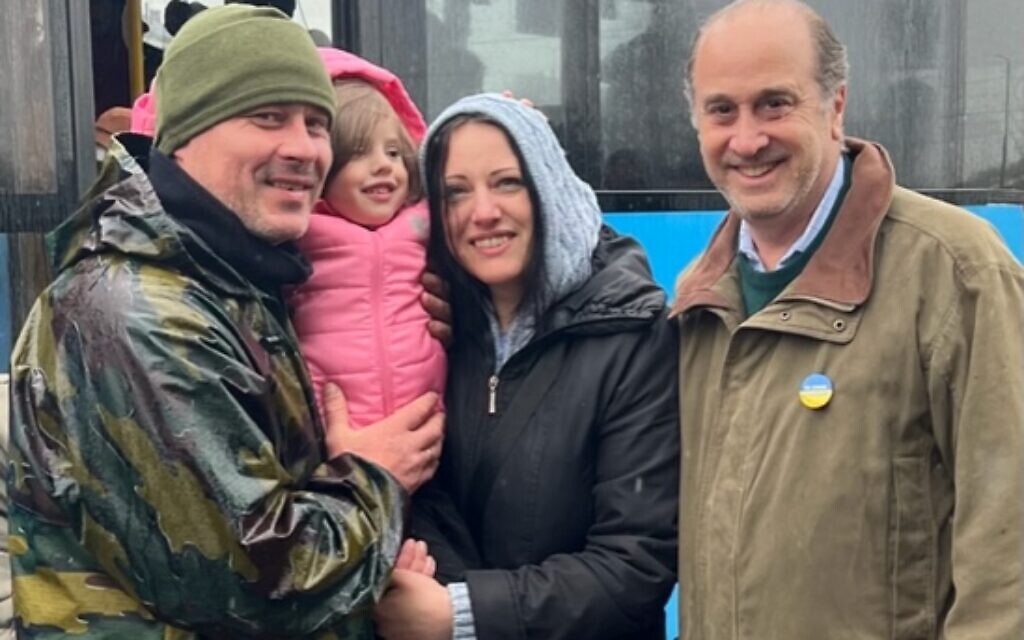 Last Shabbat the former Conservative politician Brooks Newmark found himself unexpectedly called to the Torah in Kyiv, the Ukrainian capital, at the behest of the city’s chief rabbi, Moshe Azman.

“My Hebrew’s not so good” protested Newmark, but the forceful Rabbi Azman would not take no for an answer, and so the former MP and minister now speaks of his “immense privilege” in receiving an aliyah at Kyev’s Brodsky Synagogue. Though his wife is Catholic, he says that three of the couple’s five children have been both bar- and batmitzvahed.

The fact that Newmark was in Kyev at all is part of an extraordinary story in which, via the deployment of 16 buses and a determination to help the citizens of Ukraine, Brooks Newmark has “taken to safety — I don’t really like the word ‘rescue’” an astonishing 7602 people, mainly women and children. Some elderly men have made up the numbers, too.

He is clear that his Jewish background played a part in his decision to mount this operation. “Like many of us, I had relatives killed in the Holocaust, and there were those, Gentiles in particular, who stood up for us and did their bit to save Jewish people in their moment of need, and took the risk of doing so. They took a far bigger risk than me, and I don’t want to compare… but growing up, you hear about Wallenberg, about Schindler, and that definitely has always has an impact on me.”

For the last 15 years Newmark has been involved in post-genocide Rwanda and traces his current Ukraine engagement to the humanitarian work he did there. That included launching an educational charity and building a school for 300 primary school children; and he cites the country’s “own version of Yad Vashem”, a genocide memorial museum, as another factor driving his work.

“Like many of us, I had relatives killed in the Holocaust, and there were those, Gentiles in particular, who stood up for us and did their bit to save Jewish people in their moment of need

“So my whole engagement in Ukraine isn’t a one-off, it’s part of the continuum for me of the work I’ve done in Rwanda. You will know that during the Second World War there were more Jews killed in Ukraine —as a percentage of the population — than almost anywhere. But notwithstanding that history, I felt a huge imperative to go in — because it is not the fault of the next generation for what they are  undergoing. They are facing this aggressor, who in my opinion is Stalin Mark Two, creating massive atrocities there. I went to Bucha, just outside Kyev, and there is a mass grave with 412 people there”.

On the second day of the war, in February, Newmark made contact with a Latvian friend who has a bus company and was moving people away from the Polish/Ukrainian border towards Germany, France, or Latvia. Newmark, who was in Rwanda doing a doctorate on education in the country, said: “I’d just finished my field research and was going to take a break. But instead I joined my friend in Poland in the first week of the war and we began busing people from the refugee camps to Paris, Luxembourg and Riga.”

After a couple of weeks the areas started to empty and so Newmark suggested going into Ukraine directly to see if they could help. “We brought three buses into Ukraine from Lithuania and were busing people from Lviv and Kyev. Then we moved further east to rescue people who had come from Mariupol”.

Newmark and his friend offered their services for free; people were initially grateful, but as the war moved to the east, Ukrainians grew “very suspicious” and feared that the free buses were actually transporting them to Russia. Newmark had, up to this point, been directing operations remotely while his Russian-speaking partner was on site. But the local nervousness drove Newmark to go out to Ukraine himself, promoting himself as a British helper.

“We brought three buses into Ukraine from Lithuania and were busing people from Lviv and Kyev. Then we moved further east to rescue people who had come from Mariupol”.

The two men negotiated with local bus companies and Newmark made a promotional video, after discussions with city mayors. They put 16 buses on the ground and the operation took shape.

In the meantime, Newmark was contacted by a former student of his from five years before, when he had lectured on politics in Kyev. Katerina, a  young journalist, sent Newmark a WhatsApp message from a basement where she and her mother Svetlana, a paediatric nurse, were hiding. Now mother and daughter, who arrived in Britain “on the Passover weekend”, are safe in Brooks Newmark’s London home.

Home Secretary Priti Patel is Newmark’s MP and he has been in contact with her to discuss how to improve the visa scheme for bringing Ukrainian refugees into Britain. “I could give her direct feedback on the frustrations people were having, and on how they could streamline things better.” In fact Svetlana and Katerina both applied at the same time for visas, but they did not receive them at the same time. “I have tried to argue that families should be allowed to apply on one visa”, he says.

To some extent Newmark’s Ukraine venture is squaring the circle. “Technically, Neumark, where my family probably originated from, is part of that whole Belarus, Ukraine, part of Poland area. In the end my father’s family were from Warsaw. I’m a complete mongrel: I’ve got Moldovan blood, Romanian blood, another quarter that’s Turkish, because my mum’s father was from Istanbul. One hundred per cent Jewish.”

Newmark’s bus rescue operation has cost in the region of £300,000, raised from family and friends. Each bus, containing 50 people, costs around £2,000, and he reckons to raise more from similar sources as and when needed. He won’t join up with a big charity because he likes the flexibility of being able to change the nature of his help when necessary. His next project, he says, may be restoring the imbalance in the lack of ambulances in Ukraine, saying he is thinking of buying a fleet to deploy there.