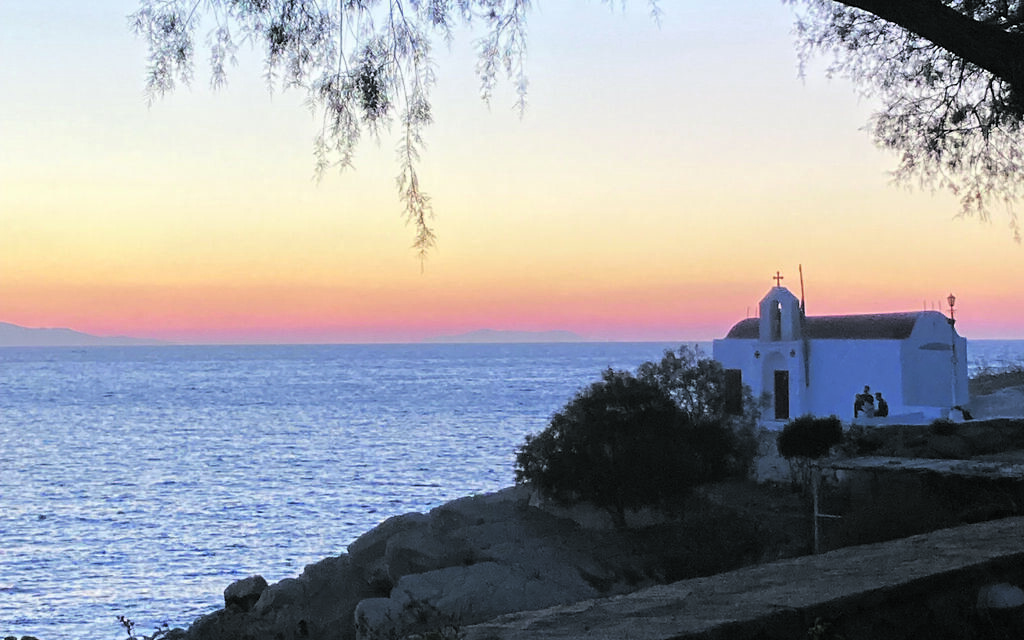 That Mykonos view of Delos, the glistening sea and tiny white chapel will never leave you

Once upon a time, the turn-down service and chocs on the pillow were the most a guest could expect by way of hotel extras. These days, those extras can be anything from a goldfish in a bowl, a rainforest shower, full-size Bulgari toiletries or a Haribo-loaded minibar. I still have my doubts about the fish, but all those extras were surpassed when The Foundry in Athens provided a piano. 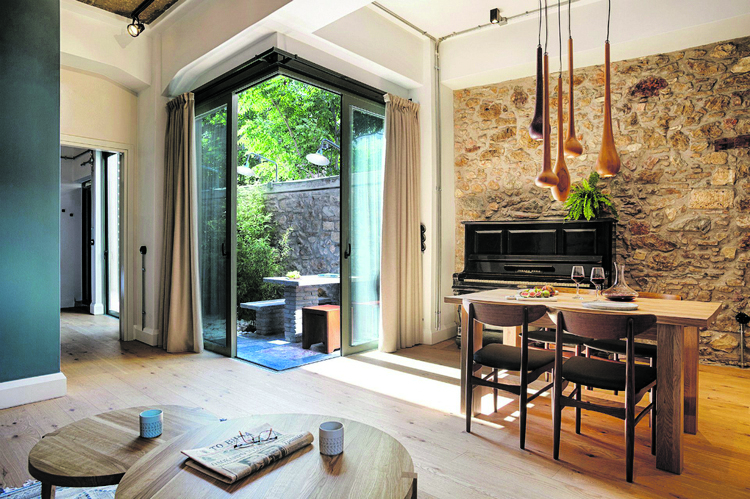 Yes, a piano, in all its shabby chic glory standing against an arty brick wall
in our expansive ground-floor suite. Now I’m no Daniel Barenboim, but it was crying out to be played, so my daughter hit the keyboard while we took in the dreamy comfort mattress in the master en suite, the full-size dining table and catering-style kitchen.

“Obviously we can live here,” I told my husband and, as The Foundry is a stone’s throw from Avissinias Square and the Yusurum (flea market) – named after Jewish merchants Noah and Elias Yusurum – it was meant to be. To be honest, my love for The Foundry started before I saw the piano. It began when I stood in the lobby decorated with parody movie posters and shelves of vintage magazines. 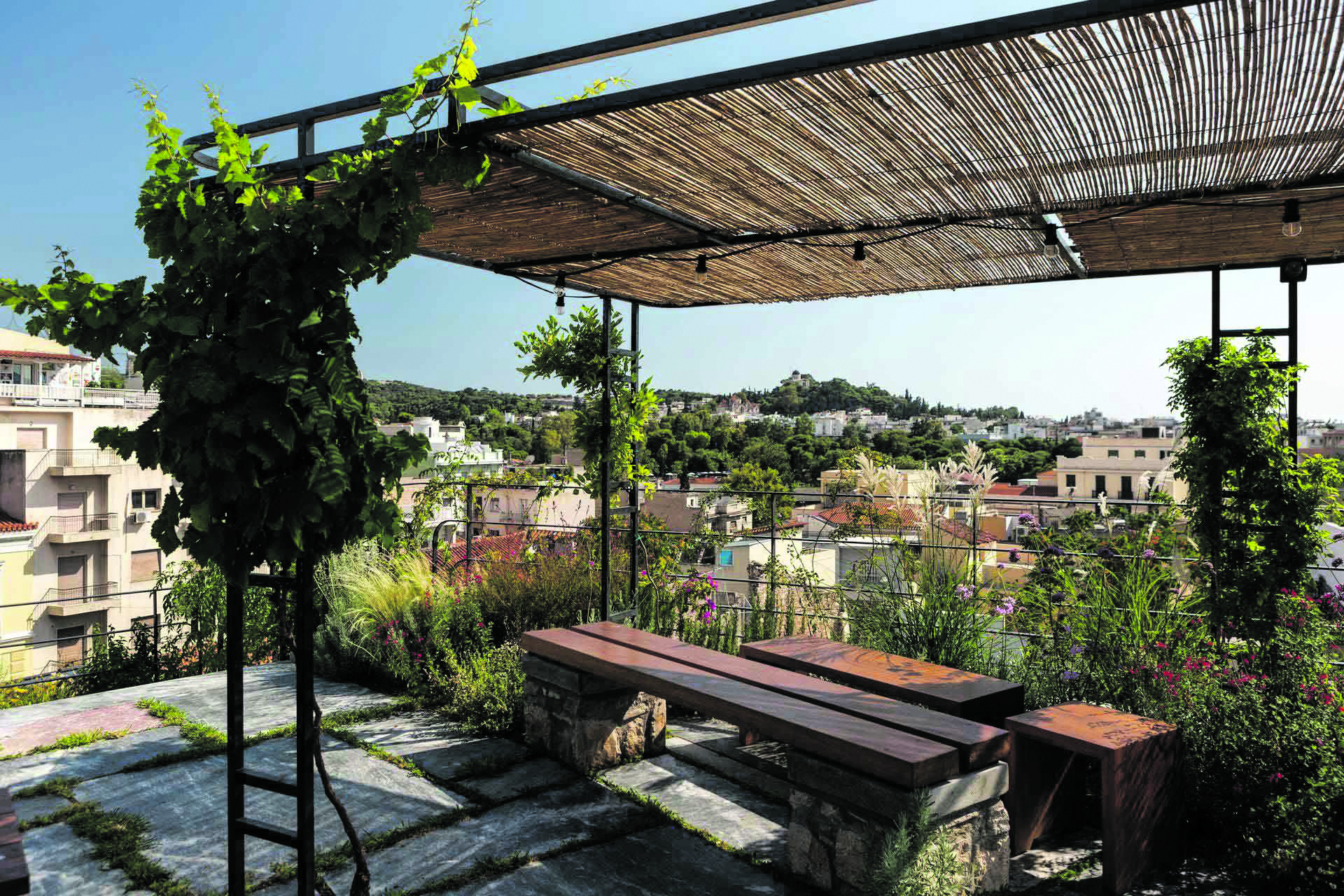 Picnic on The Foundry roof with a view of the Acropolis

The Greeks, once the most prolific publishers, have also been hit by the global decline in print, but cope by redesigning their titles or publishing new ones. To see piles of old mags for perusal warmed my heart and, with the suite being so comfortable, it was tempting to stay home. This was clearly the intention of Foundry owners Miltos Portokalis and Marios Koulouros or they wouldn’t serve a picnic basket breakfast in the glazed sunlight of the rooftop terrace.

Draped by vines, the terrace has an unimpinged view of the Parthenon, so why not sit there all day eating Greek honey on irresistible bread rolls?  But Psyrri beckoned and it’s a call you can’t ignore because the historic neighbourhood is electric, having undergone the sort of regeneration seen in Shoreditch with the same historic interest and eateries. 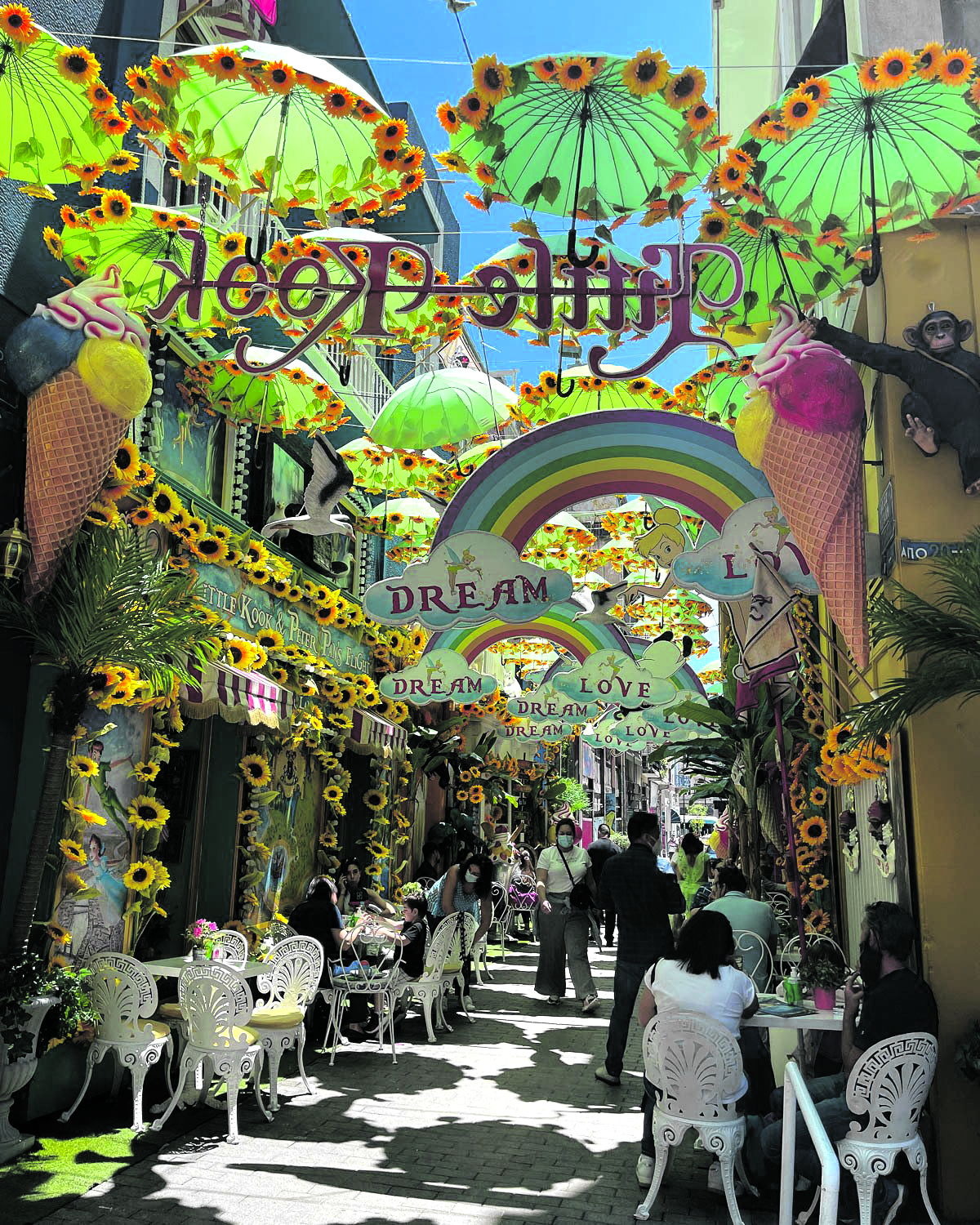 Psiri with all the colour and synagogues you need.

In the early 20th century, Psirri had a strong Jewish presence and the two synagogues around the corner from the official Holocaust Memorial – a minimalist sculpture of a compass-like Star of David on Evovoulou Street – attest to this. Athens’ first synagogue was purchased in 1903, but differences between Sephardic and Romaniote Jews led to a second synagogue opening a few doors down.

Both synagogues still survive on Melidoni Street,but are rarely open to the general public so appointments are required if you want to visit.The aforementioned Avissinias Square is a 10-minute stroll from The Foundry, past antique emporiums, vintage boutiques and tourist shops. The area south of the square is an open-air bazaar, where collectors browse for old trinkets by day and junk seller stalls sidle for space beside fashionable bars and restaurants at night. 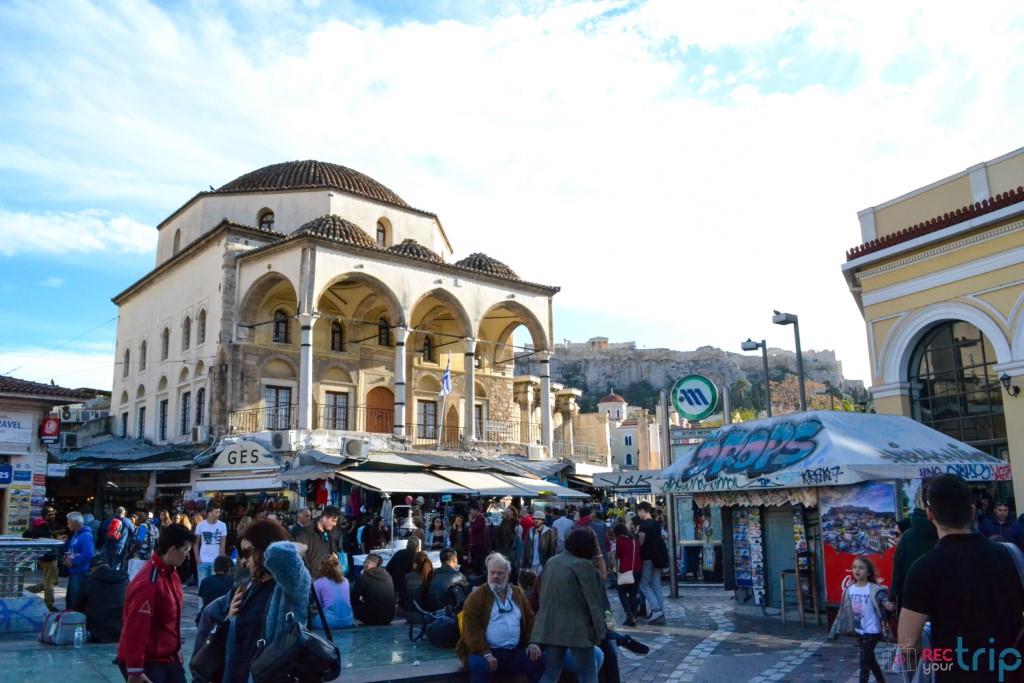 Monastiraki Square where you can pick up that essential tour bus

At the square, we picked up one of those tour buses most are reluctant to take, but are essential if you want a city’s story and this one had a good ancient history audio. I did Classics A-level, but my extra nibs were lost on the husband and daughter, who only had eyes for the Olympic Stadium (a rebuild). The bus dropped us near, but not at, the Parthenon, so there was a lot more uphill walking, which we forgot about as we arrived and an opera rehearsal was in progress at the ampitheatre.

The last time I visited Athens was just before the 2004 Olympics, and the rubble and congestion have since been replaced by streamlined architecture and fewer road-works. The city also offers the kind of welcome you wish you could bottle to serve in our own town, and good Greek food eaten at a street table will always be my idea of fine dining. In the courtyard by The Foundry, we ate at Piko, where we had healthy wraps and burgers, but the waiter was so good-looking it was hard to focus on the food, although I recommend the cocktails, which were a nice touch before returning to the piano. It’s amazing how much better I can play after a Dirty Martini. 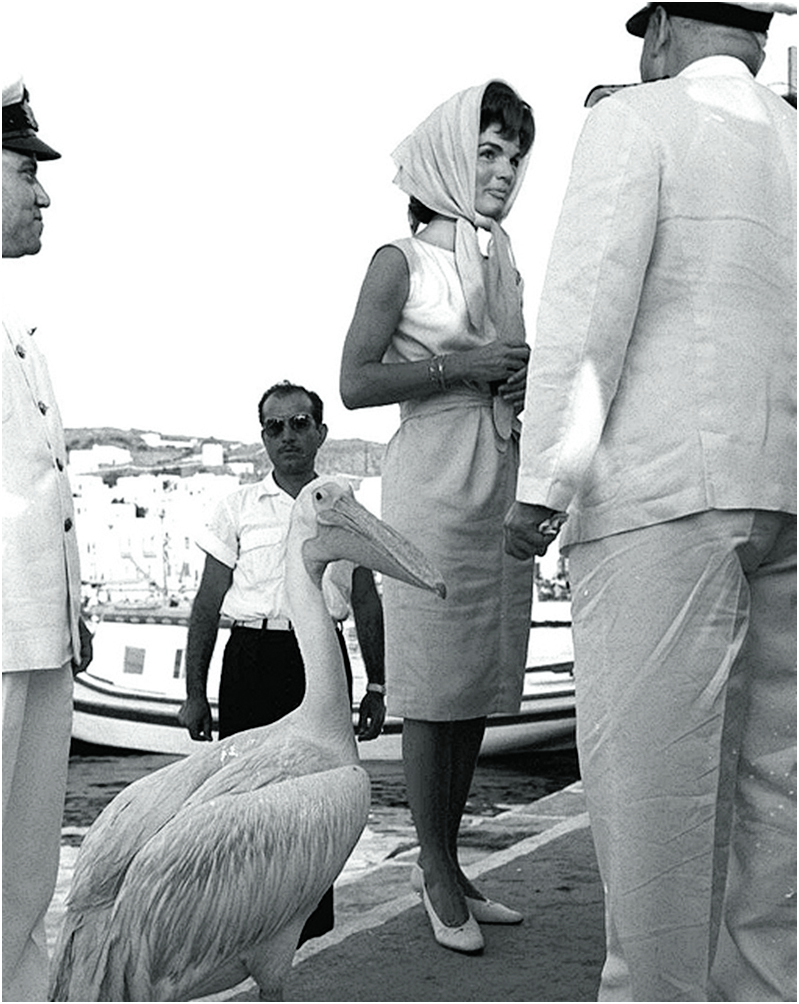 Being Jackie O works in Mykonos

My first visit to Mykonos was in 1982, when the island was still a haven for gay party seekers and north-west London had yet to claim it for their hen weeks and weddings. On that visit, with friends Laura and Leanne, we shared the most basic room with a monk’s mattress and had to shimmy through a wall hole to get to an outdoor shower.

To say that Mykonos has changed is an understatement, what with the likes of Lindsay Lohan setting up their own 200-euro-a-day beach clubs. But nothing and no one could rob the island of its aesthetic charm or perfect light.

Arriving by boat from Piraeus, as I did in ’82 with backpacker’s soul intact, my stay this time was at the legendary Mykonos Theoxenia, which sits beside the iconic windmills. This hotel was beloved by Aristotle Onassis and his wife, Jackie O, who, like so many, fell in love with Mykonos and its sublime view of the Aegean and nearby Delos, a sacred site held to be the birthplace of Apollo. 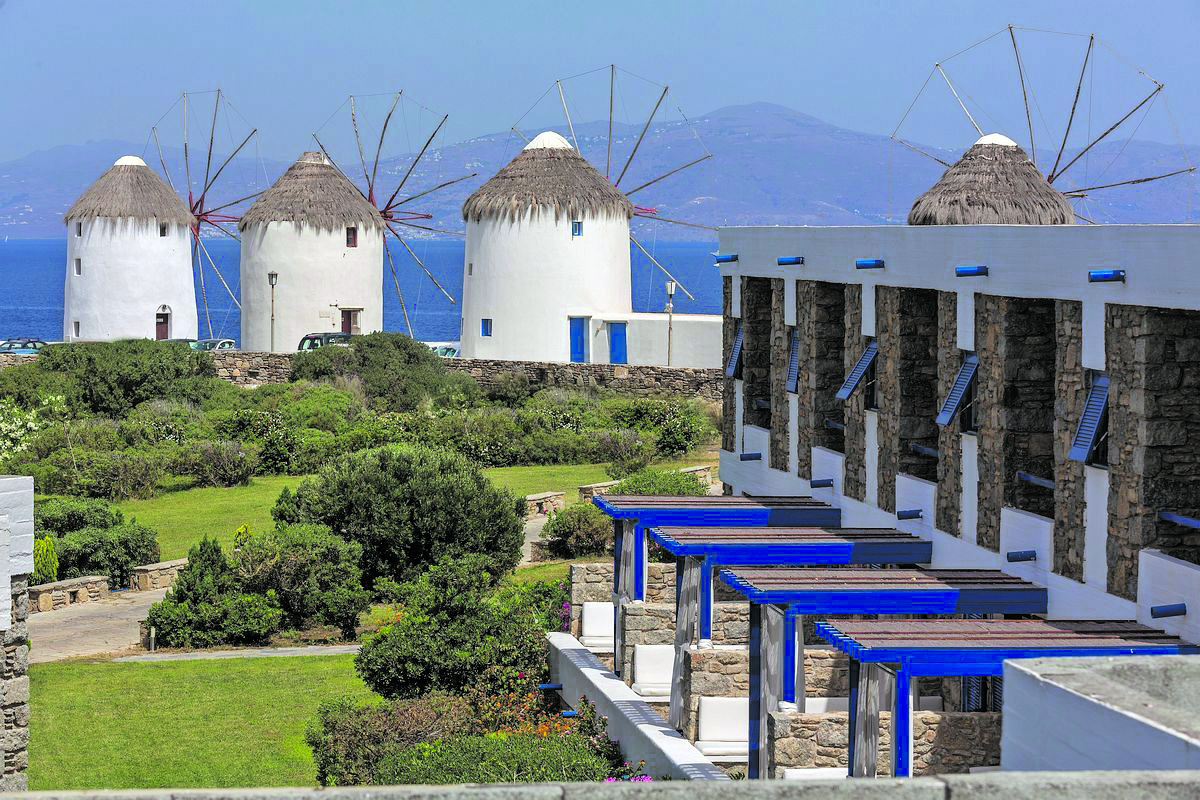 That view of Delos, the glistening sea and tiny white chapel on the rocks, is a fixture from any of the vast windows that run the length of the Theoxenia, and I could probably paint the vista from memory after so many hours on the big balcony. Eventually, the chambermaids had to shoo me out, which gave me an opportunity to ask about the room fragrance (fresh linen and citrus) and two spray bottles were kindly gifted. Am I the only person to leave with such domestic trophies?

The hotel breakfast was bountiful (fruit, eggs, salmon and cheeses), setting us up for a day of getting lost in the winding alleys of Little Venice with its cute sunken shops and cocktail bars. 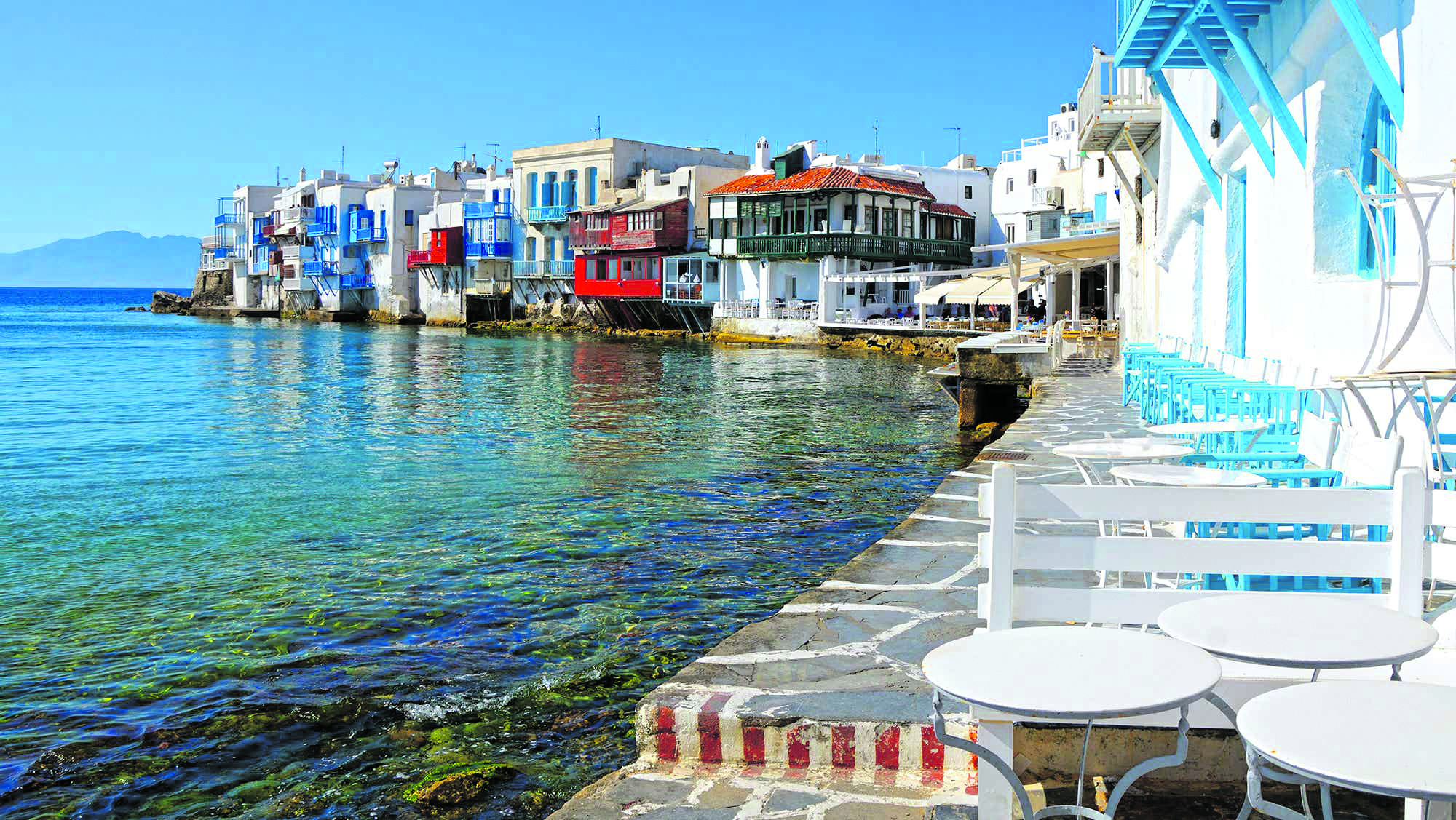 With a 14-year-old in tow, cocktails can be tricky, but the staff at BAO’s (named after a former local pirate) were willing to create something colourfully fruity to keep her happy. There was other joy for a fashion-obsessed teen on Matoyianni Street, where unaffordable designer clothing is sold at places such as Soho Soho, which stocks labels from Alexander Wang to Victoria Beckham. With purchasing confined to friendship bracelets and peaches, I switched the shopping agenda to searching for Petros, the island’s pelican mascot, who is spotted in alleys or resting by the windmills. 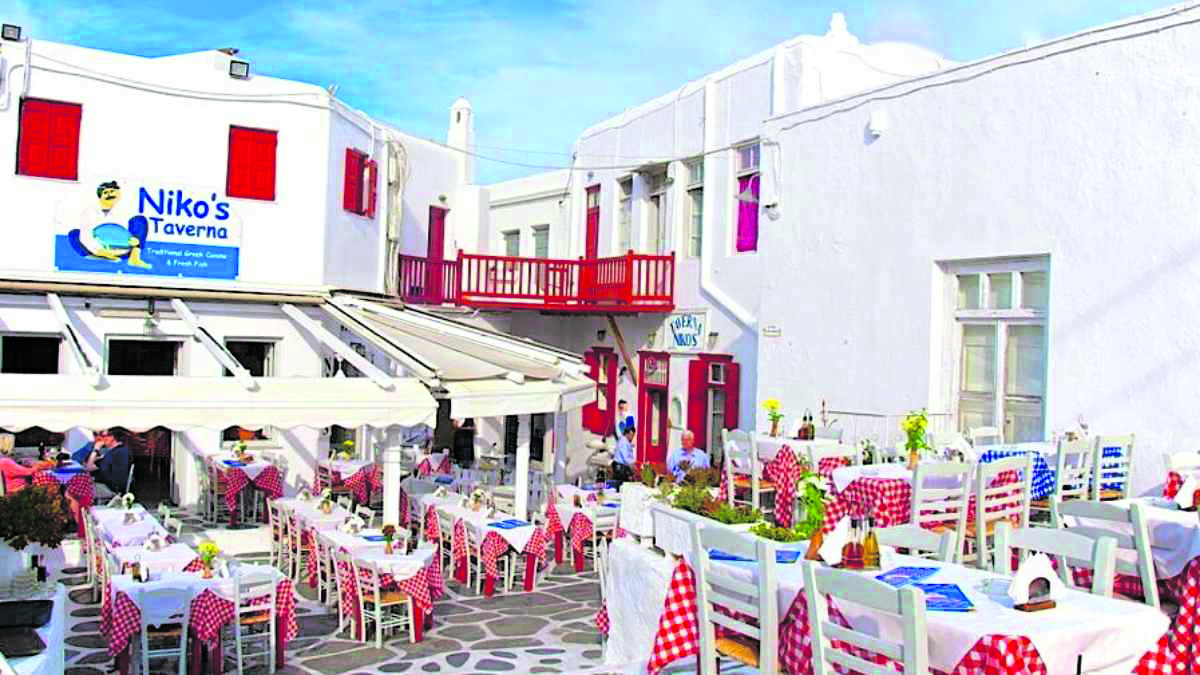 You have to go to Nikos, but you will have to wait for a table

Several days went by and an evening that took us to Niko’s Taverna, a Mykonos institution known for its fresh fish, and the chic Townhouse, where we danced. Dancing from 5pm on Super Paradise Beach was also an option, but being whipped up into a frenzy by a DJ was more enticing in 1982, so I had a sundowner back at the Theonexia and chatted to manager Stefanos Niakas, who has worked there for years and manned the property through the pandemic. He had many tales of Jackie O (there’s a bar named in her honour) and told me the hotel was about to be renovated. 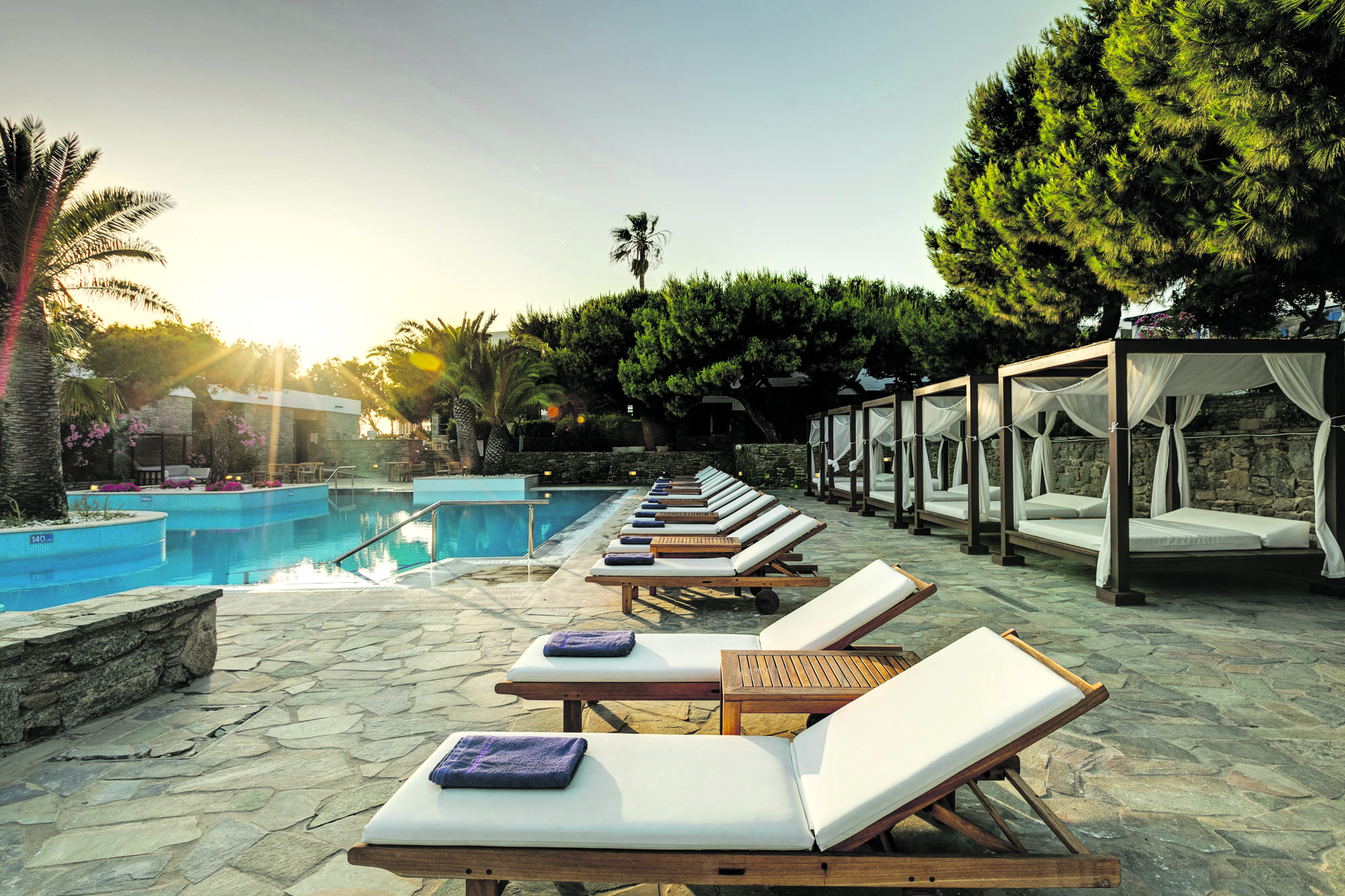 It is a listed building, so only interiors will change, but I fully intend to see the reinvented Theonexia when the hotel reopens in late spring. Stefanos also told me I’d find Petros in the hotel car park, and he was right, as the soft feathered bird was there sunbathing the next morning. 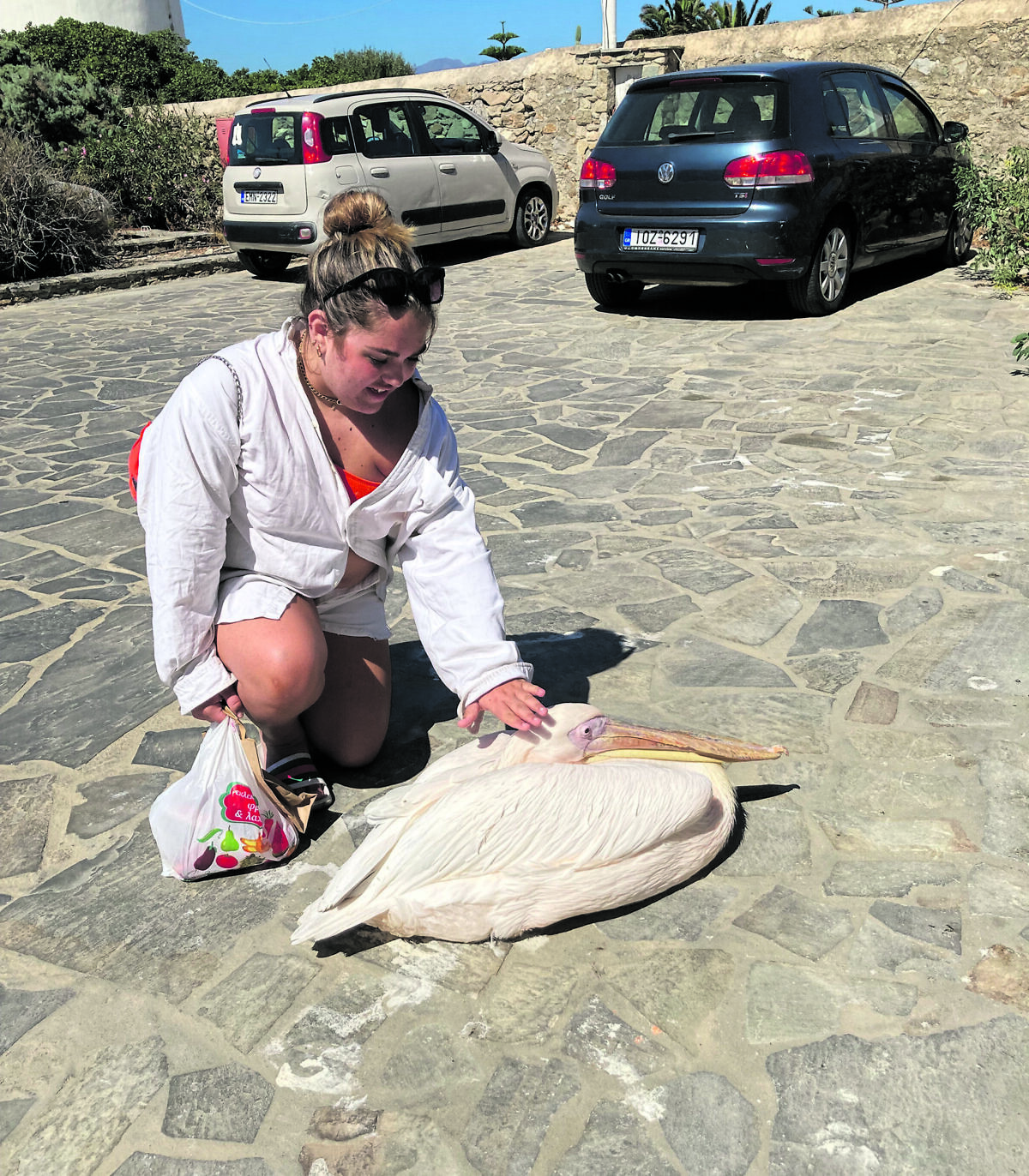 My daughter Madison with elusive Petros the pelican

So our Aegean adventure delivered a Parthenon picnic, pelican petting, teen cocktails and dancing and we arrived on the island by boat. What could be more Jackie O than that?