If there was one person Isaac Herzog wouldn’t have minded being upstaged by on the first day of his U.K. visit, it was surely Sir Ben Helfgott.

The Holocaust survivor, who competed at the Olympics within a decade of his liberation from the camps, was among guests at Chelsea’s Stamford Bridge stadium to welcome the Israeli President at his first public engagement of a three-day trip.

But the club turned the spotlight on the legendary educator by surprising him with a cake – and a chorus of ‘happy birthday’ – ahead of his 92nd birthday tomorrow. Chelsea owner Roman Abramovich, on a rare visit to the UK from his home in Israel, was among the 50 guests enthusiastically clapping along.

Abramovich had earlier paid an emotional two-hour boost to the Imperial War Museum’s new Holocaust galleries, for which he was a major funder.

At Chelsea, Herzog and First Lady Michal viewed part of the club’s 49 Flames exhibition, a collection of paintings of Jewish athletes murdered in the Shoah by British-Israeli street artist Solomon Souza.

The project, for which Jewish News was a media partner, was launched last January to mark the 75th anniversary of the liberation of Auschwitz and included a giant mural at Stamford Bridge. 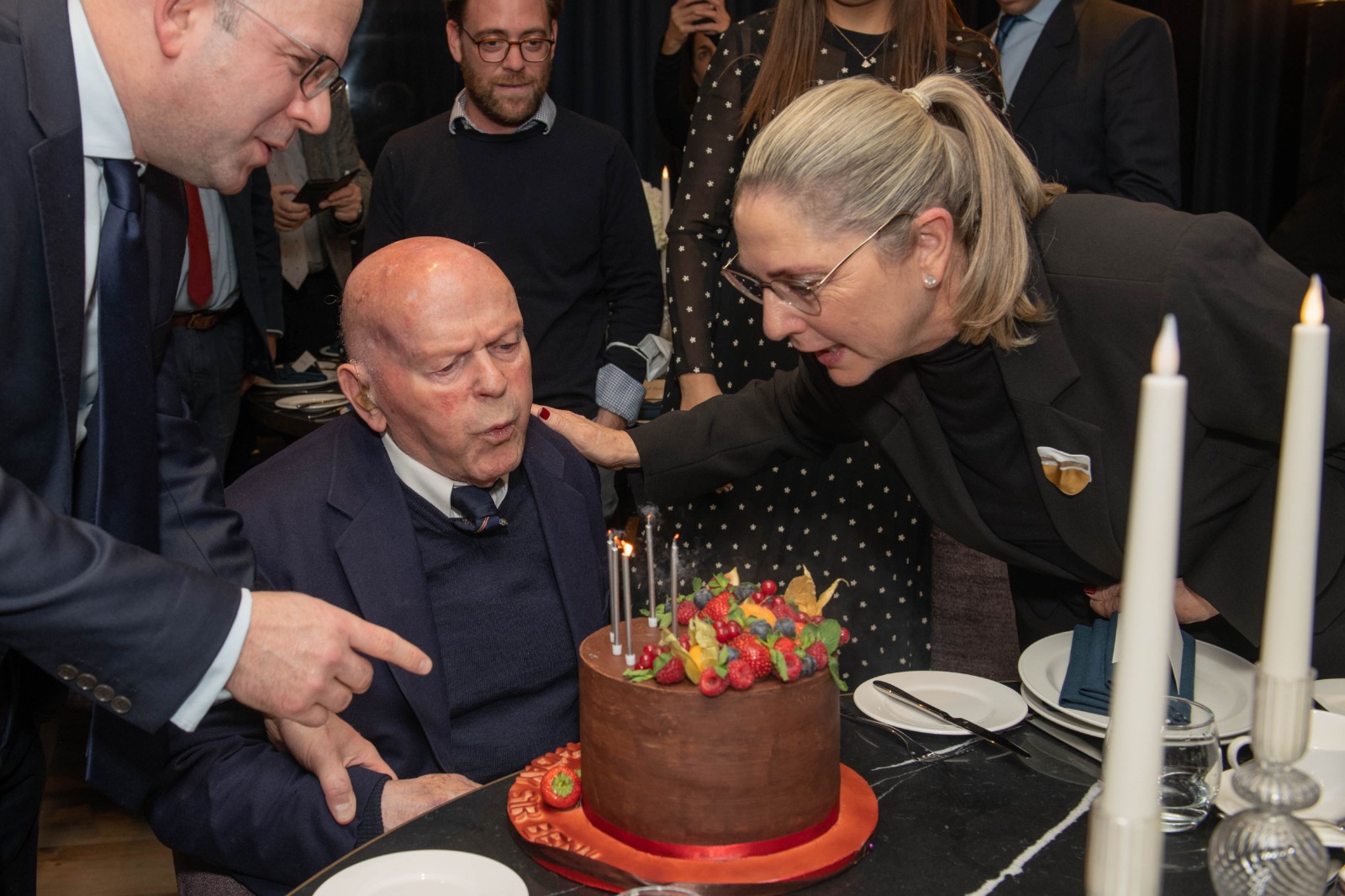 The president also admired Souza’s latest work, a painting of a young Helfgott competing in his sporting heyday in 1956 and 1960 when he captained the British weightlifting team.

He hailed Sir Ben’s “iron will” and his work in keeping alive the memory of the Shoah before heaping praise on Chelsea and Abramovich for their Say No To Antisemitism campaign he initiated four years ago as a “shining example”. 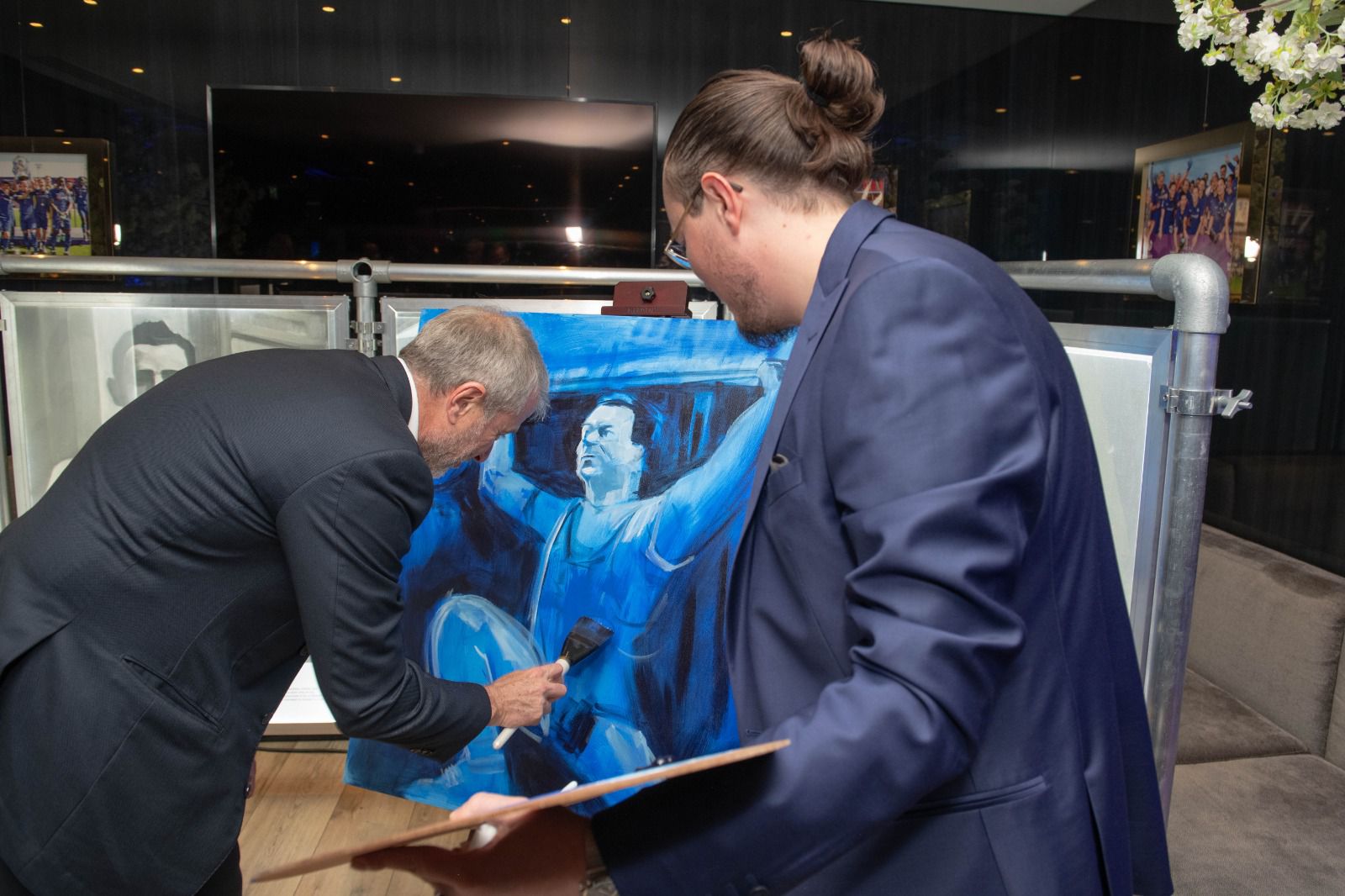 The stunning portrait of Sir Ben

While warning that sporting arenas can be host to overt racism including antisemitic chanting, Herzog said that sport at its best “puts competitors on an equal playing field and allows for positive and healthy negotiations between neighbourhoods and nations.

“The Jewish athletes portrayed in Solomon Souza’s stunning 49 Flames exhibit represents the strength and beauty of human will, performance and commitment to excellence, and a combination of pride in the country they represented and in their Jewish heritage.” 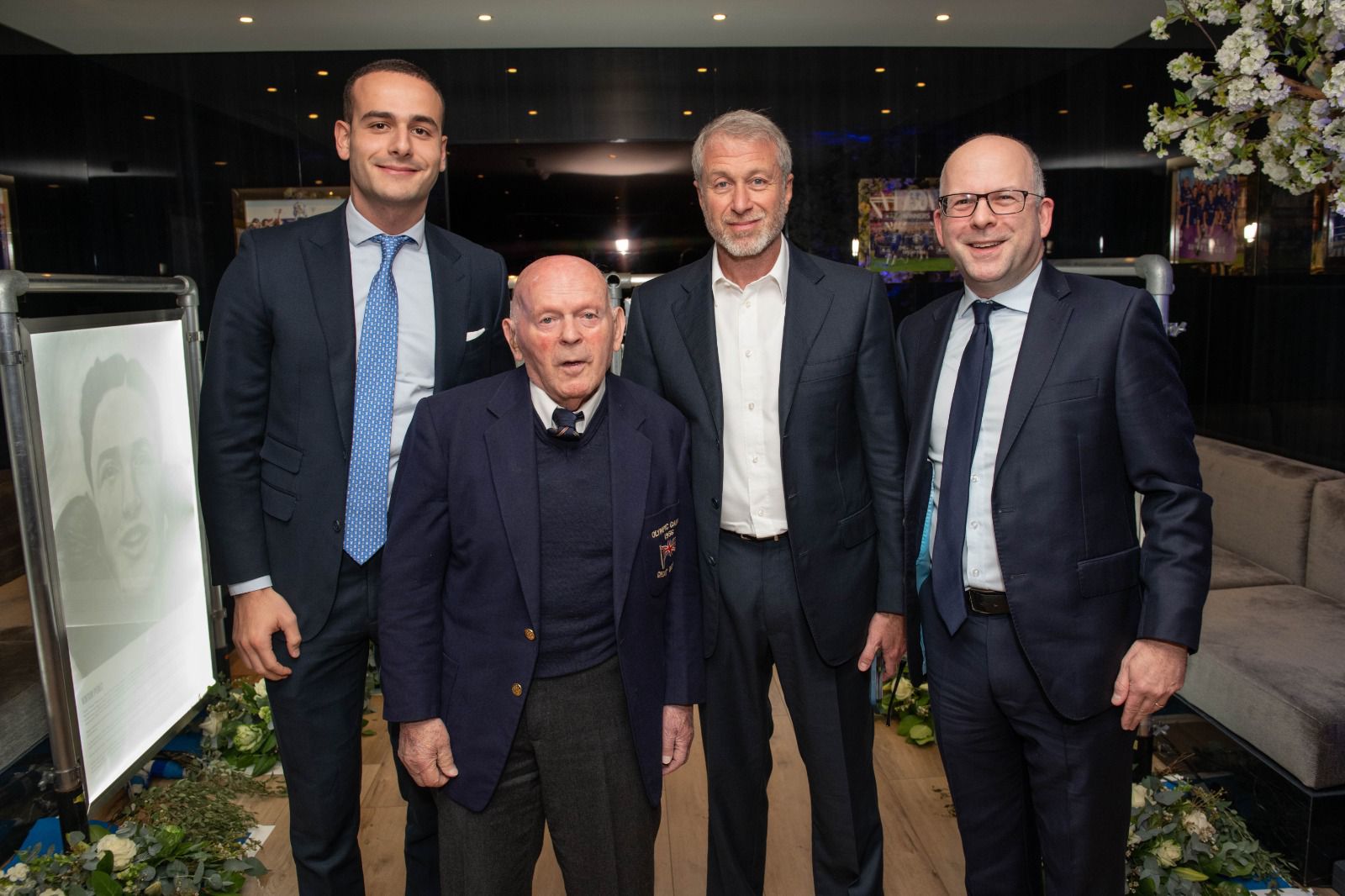 Sir Ben’s sons Michael and grandson Sam read an extract from an article by the survivor, who founded the 45 Aid Society to support fellow survivors and has spent his life educating about the importance of tolerance and challenging hate. Poignantly, with Sir Ben increasingly frail, he also suggested this may be the last time he wore the British team blazer from 1956 – feeling it was appropriate in such a sporting setting.

Michael told the gathering including Ambassadors Tzipi Hotovely and Neil Wigan: “Whilst his spirit remains strong, he can no longer do what he once did. And he is delighted to see the next generations doing such important work so well.”

He said: “By honouring athletes who died in the Shoah, we actually remember all those who perished and we lament their lost lives and lost talents.

“In Solomon telling their stories so powerfully through his art, the tragic consequences of hatred are made more real to us. And the importance of constantly countering hatred with tolerance, inclusivity, and kindness can be better learned. This has been at the core of my father’s life and message since 1945.”

Through his son, Sir Ben offered “thanks and encouragement to the Chelsea family”, adding: “There is no doubt that you have made and will continue to make a great impact in combating antisemitism, promoting tolerance and in doing so improving the lives of many people all round the world.”

Chelsea chairman Bruce Buck stressed the importance of Chelsea continuing to use its platform to fight hate. He opened the event by joking that, while Chelsea had previously welcomed the likes of Pele and Madonna to the famous ground, this was the first time they’d welcomed a relative of a former Chief Rabbi of Ireland – a reference to the president’s grandfather Isaac HaLevi Herzog who’d served in the role. 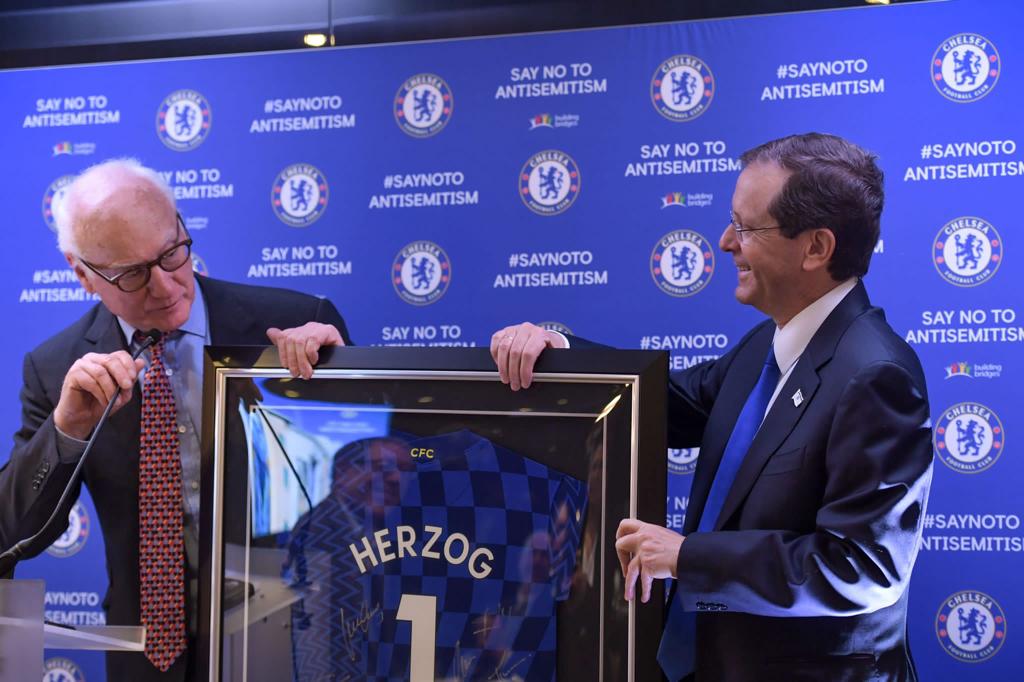 Isaac Herzog gets his Chelsea shirt

Emphasising his British credentials, Herzog also referred to his father Chaim, who previously served as president of Israel and who enrolled in the British army where he was among the liberators of Bergen Belsen where Sir Ben’s sister Mala was incarcerated.