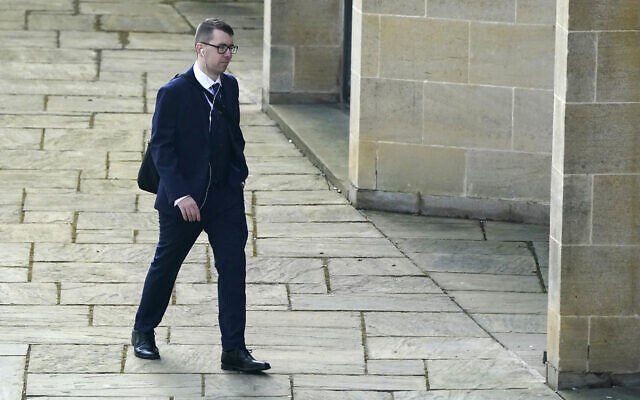 Founder of banned terrorist organisation National Action Alex Davies arrives at Winchester Crown Court where the 27-year-old, from Swansea, is charged with membership of an outlawed organisation between 17 December 2016 and 27 September 2017. 2022 (Jewish News)

The co-founder of a banned fascist group has told a court he aims is to repatriate ethnic minority and Jewish people from the UK “along the lines of the Conservative Government’s Rwanda policy”.

Alex Davies, 27, is on trial accused of being a member of the proscribed organisation National Action (NA) after it was banned on December 16 2016.

Barnaby Jameson QC, prosecuting, has told Winchester Crown Court that the UK Government banned the group after it had “terrorised” towns across the country with its call for an “all-out race war”.

Following the ban, Davies set up “continuity” group NS131, which stood for National Socialist Anti-Capitalist Action and was itself later banned by the Government, Mr Jameson said.

Davies has told the court that NS131 was not set up as a continuation of NA and had different aims and processes.

Asked by Mr Jameson if the repatriation of ethnic minorities would be enforced, he said: “It would be compulsory, I imagine.

“I imagine it would be run along the lines of the current Conservative Government and their sending asylum-seekers to Rwanda.”

He went on: “If we were to take power, our aim is to have an overwhelmingly white Britain as it more or less has been for centuries.

“It’s only in the past 50/60/70 years we have had mass immigration. It would be to return to the status quo of before the Second World War.”

Asked if he would repatriate Jewish families with British heritage dating back “thousands of years”, he replied: “Yes, that’s how repatriation would work.”

Davies denied he is a violent person and said that training camps he attended had not been paramilitary-style training events.

He added that he had been quoting former BNP leader Nick Griffin when he sent a message to a potential recruit in April 2017 which stated: “We need to be smart but ready to use well-directed boots and fists, if needs be. No pacifist movement is going to go anywhere.”

Davies said that, after the ban, he was involved in “advancing the cause of national socialism, not the cause of a continuity NA”.

“After proscription all I am interested in is pursuing legal political activities,” he said.

Davies, from Swansea, denies membership of a proscribed organisation between December 17 2016 and September 27 2017, and the trial continues.