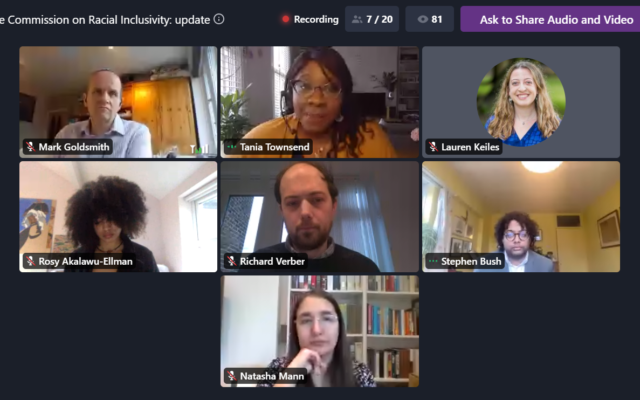 Board of Deputies President Marie van der Zyl has admitted the community still has a “mountain to climb” before achieving racial inclusivity.

Addressing Limmud’s annual conference online, she apologised for “every act of discrimination that people have suffered” in the community.

Van der Zyl added that she was “moved by many of the testimonies” during the Board’s Commission on Racial Inclusivity’s evidence sessions and expressed hope that this was a “moment of change.

This was welcomed by Tania Townsend, representing Liberal Judaism, who spoke movingly of the report as a “source of hope” but cautioned: “The real test will be whether I feel different walking into different spaces and whether people who look like me feel different in their communities.”

Townsend added that while the report highlighted problems and talking points, it did not address the infrastructure needed to embed some of the proposed solutions – particularly given the finite resources of smaller organisations.

The Commission on Racial Inclusivity in the Jewish Community was set up by the Board to understand the experiences of Black Jews and Jews of Colour in Britain. Published in April 2021, the report considered 17 areas of communal life and offered 119 recommendations.

Richard Verber, Director of Communications for the United Synagogue, added that his organisation’s research had uncovered issues around inclusivity outside of the Commission’s scope: “We need to make sure our services are also welcome to people with learning disabilities and set up in such a way that they can both participate and enjoy themselves.”

Verber noted the US was looking into developing a new, inclusive Siddur with accessible text and language.

17-year-old Rosy Akalawu-Ellman, one of the witnesses for the Commission, reflected feeling “seen and respected as a Black Jew for the first time on an establishment level.”

The A level student, who is of Nigerian-Igbo and Ashkenazi-Jewish heritage, added it was “empowering and liberating” hearing similar stories from other witnesses.

“There have been tangible benefits from this commission. I do feel other Jews of Colour will not have to deal with the many challenges I have faced due to my dual heritage. I believe this commission will be a major factor in that,” she concluded.