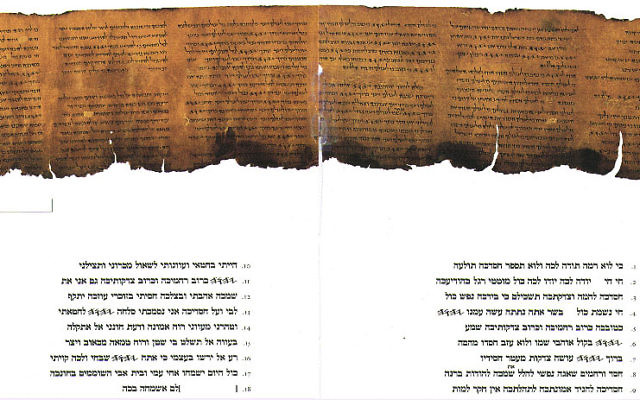 The Psalms scroll, one of the Dead Sea scrolls. Hebrew transcription included.

Israel has pulled out of a planned exhibit of the Dead Sea Scrolls in Frankfurt because the German government would not guarantee their return if claimed by Palestinians.

The Frankfurt Bible Museum announced that it has canceled the exhibit scheduled for a September 2019 opening. Its director, Jürgen Schefzyk, said he regretted the German government’s decision, adding that neither Holland nor Austria would have hesitated to issue general immunity guarantees.

According to German news reports, the government guarantee would have blocked Palestinian or Jordanian authorities from contesting the provenance of the scrolls, which are among the oldest known texts related to the Hebrew Bible.

Twelve years ago, Germany became the first country to exhibit a segment of the scrolls outside the Middle East, according to James Snyder, then director of the Israel Museum.

The first scrolls in the cache were discovered in 1946 by Bedouins in the West Bank, which since 1967 has been under Israel’s control. In 2010, the Jordanian antiquities department demanded the return of some of the scrolls, which it said Israel had taken illegally from a museum there in the 1967 war.

The Frankfurt Bible Museum, which is largely funded by a local Protestant umbrella organiSation, reportedly has worked closely with Israeli Antiquities Authority officials for years. Before lending the scrolls, Israel required a guarantee from Germany that they would be returned.

Boris Rhein, the culture minister from the state of Hesse, told German news agencies that the German Foreign Ministry and federal commissioner for cultural affairs considered the ownership of the scrolls to be unclear. Rhein said he would have gladly issued the guarantee himself, if he could.

A segment of the scrolls was displayed in Berlin’s Martin Gropius-Bau Museum in 2005 as part of an exhibit honoring 40 years of diplomatic relations between Germany and the Jewish state.

At the time, Snyder called the scrolls “a kind of ‘Mona Lisa’ for us,” adding that he was “proud of its first voyage away from Israel.”