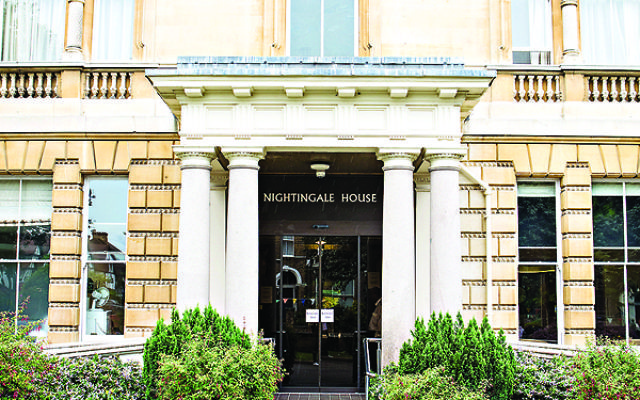 The entrance to Nightingale House

A Jewish care home has agreed to pay out £1,000 after a resident complained he was left in a “freezing” room without wifi.

Nightingale Hammerson was criticised by the Local Government and the Social Care Ombudsman for some failings in the case and has since written a formal apology.

The complaint was lodged by a husband and wife who both stayed in separate rooms at one of its homes for several weeks last year.

The husband, dubbed Mr X, is the primary carer for his wife who has dementia, and needed to stay in the home because he was recovering from an operation.

But during the stay, he alleged he was left in a room with faulty heating for eleven days, that medication wasn’t given to his wife as it should have been, and that items of the her underwear were lost by staff.

The home claimed a portable heater was brought the day after it broke, and that it offered to reimburse for the lost underwear.

The Ombudsman found that there had been failings in some aspects of the couple’s care, and the home’s response to a complaint “was factually inaccurate on some points and it gave conflicting explanations.”

It added that an initial payment offer £100 was not sufficient. “It then offered £750 as a gesture of good will but failed to identify its conflicting explanations,” said the Ombudsman.

“This added to Mr X’s frustration and compounded his sense of injustice.”

The resident had also complained that he was forced to walk a mile to a pharmacy in the cold to fetch some emollient cream.

The Ombudsman, however, found he could have informed the home, who would’ve arranged a taxi.

It also found staff could not be criticised over a lack of furniture in his room, as the room was originally intended for one person.

A spokesperson for the home said: “We acknowledge the Ombudsman’s findings and are very sorry that the experience was not consistent with the one enjoyed by generations of our residents.”

The care provider was ranked ‘Outstanding’ at its last inspection by the Care Quality Commission, which inspects care homes.