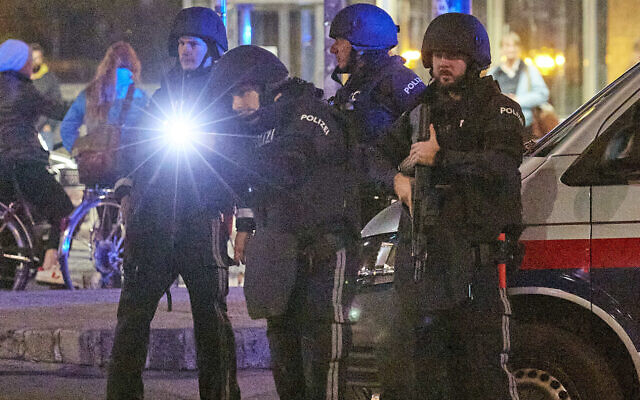 Police officers search a street in Vienna, capital of Austria, Nov. 2, 2020, after two civillians were killed in early November during a terror attack (Photo by Georges Schneider/Xinhua)

Jewish communities worldwide expressed deep shock this week at the “terrible attacks” in Vienna which have left three people dead and several injured.

Police in the Austrian capital said the attack was considered to have an Islamist motive, with a suspect – who was shot dead by police – armed with an assault rifle, carrying other handguns, and wearing a fake explosive belt.

Shots were fired at six different locations in the city centre on Monday evening, including near a number of synagogues,  and two men and one woman were killed.

Authorities are looking to determine if other attackers may be on the run.

Prime Minister Boris Johnson tweeted to express solidarity with Austria after the deadly attack, saying: “I am deeply shocked by the terrible attacks in Vienna tonight.

“The UK’s thoughts are with the people of Austria – we stand united with you against terror.”

Oskar Deutch, president of the Jewish Community in Vienna, on Monday told the Kurier news site that none of the city’s Jewish institutions appear to have been hit. But he did not know if they had been a target in the shooting and warned the city’s Jews to stay home.

This comes after a series of Islamist attacks in France, in which school teacher Samuel Pety was beheaded, and three were killed outside a church in Lyon.

The Community Security Trust in the UK tweeted: “Last night’s terrorism in Vienna, and that very recently in France, are harsh reminders that attacks can occur any place any time & may go from one target to another. Please be alert, follow security measures and report suspicious activity..”

Quoting Vienna police authorities, the Board of Deputies of British Jews meanwhile said: “We are following events in Vienna with concern and are in contact with the local Jewish community to understand whether they have been affected. Please only share information from verified sources. Our thoughts and prayers are with all the Austrian people at this time.”

He added: “No place in Europe is immune to terror attacks, and no community exempt from these barbarous acts,”

“The initial shooting outside the synagogue in Vienna brings back tragic memories  for us as one of the first attacks on Jewish targets in Europe happened at this very spot almost 40 years ago.”

Rabbi Pinchas Goldschmidt, president of the Conference of European Rabbis,  said the organisation was “shocked and very sad about the terrorist attack in Vienna.”

“This cowardly act of terror is an attack on all people in Europe, our values and way of life. We must no longer tolerate this terror.”

Rabbi Goldschmidt said “the Islamist-motivated series of attacks in recent weeks also shows us that we need a new religious policy in Europe that also includes the security aspect and enables European states to remove the breeding ground for this religious extremism both online and offline.”

A police officer was among the injured, Austrian police confirmed on Twitter.

Vienna’s streets were reportedly particularly busy as people took to bars and restaurants on the eve of the introduction of harsher restrictions aimed at preventing the spread of Covid-19.