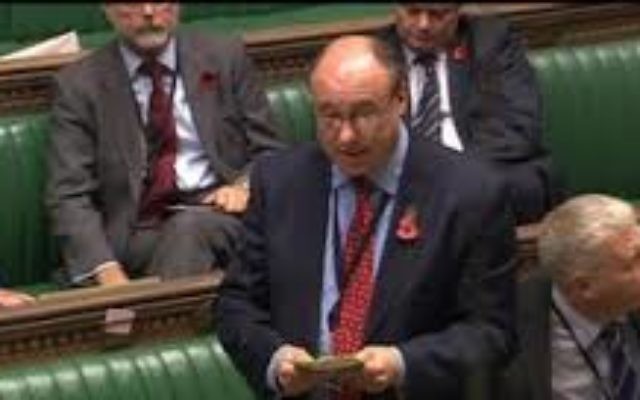 A Labour MP has asked David Cameron if British citizens returning from service with the IDF will be treated in the same way as those fighting in Iraq and Syria.

The question to the prime minister came in the House of Commons yesterday in response to plans for new laws to tackle Islamic extremism. Those include giving police temporary powers to seize UK passports of those suspected of fighting with terror groups like Islamic State.

Grahame Morris, the MP for Easington, asked: “Given the strong evidence of Israeli war crimes in Gaza—we have heard about 500 children being killed under a terrible bombardment—will British citizens fighting in the Israel defence forces be treated in the same way as those returning from Syria and Iraq?”

Cameron replied: “I really do not think that is a fair or reasonable way of describing the situation. As I said, the loss of civilian life was unacceptable, and it is right that these matters are properly investigated.

“We must remember, however, that the conflict was started by Hamas rockets raining down on Israel, and Israel has a right to defend itself. I think that the hon. Gentleman, when he looks at his words, will come to regret drawing a comparison between a soldier fighting in the Israel defence forces and a terrorist returning from Syria.”

LFI Director Jennifer Gerber said: “Grahame Morris is utterly wrong and deeply misguided to draw any comparison between the IDF and Isis, a barbaric terror group deliberately butchering civilians and publicly beheading journalists. He should immediately apologise and retract these deeply offensive remarks.

“It is worrying that an MP would use the crisis in Iraq and Syria to equate soldiers of a democratic country with terrorists who participate in the slaughter of innocent people. We would suggest that Mr Morris thinks carefully before making statements on Isis, and perhaps join others in a sensible and constructive debate about how we tackle Isis in Syria and Iraq and deal with the very real threat they pose to the UK “

Conservative MP for Finchley and Golders Green Mike Freer, who is also a vice-chair of his party, said: “Graham Morris shows the unpleasant underbelly of Labour yet again. Not only have they turned against Israel are they now suggesting an IDF soldier, serving in the armed forces of a sovereign, democratic state (and an ally) is comparable to a terrorist.”

Conservative MP for Finchley and Golders Green Mike Freer, who is also a vice-chair of his party, said: “Grahame Morris shows the unpleasant underbelly of Labour yet again. Not only have they turned against Israel are they now suggesting an IDF soldier, serving in the armed forces of a sovereign, democratic state (and an ally) is comparable to a terrorist.”

Board of Deputies vice-president Jonathan Arkush said: “The Prime Minister has made a measured and absolutely impeccable comment, as he did throughout Operation Protective Edge.  I wish other leading politicians could have done likewise, instead of importing the Gaza conflict into domestic politics and making it into a party political issue.”Labour Party member and activist Tal Ofer claimed the “horrible” comments “brought the party into disrepute”, adding: “It’s Ed Miliband’s responsibility as leader and future PM to take action.” Labour has so far failed to publicly condemn the comment.