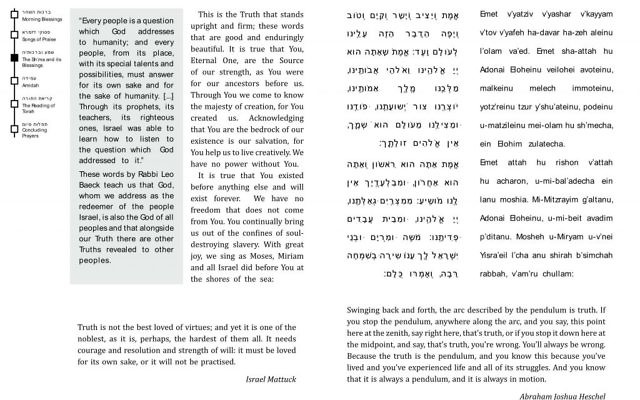 A sample page for the new Siddur

Liberal Judaism has published its first new draft Shabbat service in more than two decades, as it begins a year-long process to produce a new Siddur.

The new Siddur will be the movement’s first since 1995 and is being edited by  Rabbis Elli Tikvah Sarah and Lea Mühlstein, making it the first mainstream Siddur anywhere in the world ever edited by two women rabbis.

As the initial stage in a year-long process, the editors have produced a first draft of a new Shabbat morning service with the input and support of Liberal Judaism’s Rabbinic Conference.

Liberal communities around the UK have now been asked to spend the rest of 2018 using the service at least once a month. It will also be used at the Liberal Judaism Biennial Weekend at the end of June, when an official process for submitting feedback will be launched.

Liberal Judaism is making a number of changes for the new prayer book – called Siddur Shirah Chadashah, after the ‘new song’ that the Israelites sang following the exodus from Egypt – to make it as fully accessible and inclusive as possible.

For the first time, on each double-page spread, the Hebrew will be accompanied by both English translation and transliteration, as well as explanatory points, questions for reflection, further readings and a menu to help readers gauge where they are in the service. Feminised Hebrew is also being used for the first time for some prayers.

Rabbis Elli and Lea said: “Why do we need a new Siddur? Liberal Judaism has published a new prayer book every 25 to 30 years ‘in order to satisfy the needs of the age’ – a core principle first articulated by one of our founders Lily Montagu in 1899.

“And now, having enjoyed Siddur Lev Chadash since 1995, the congregations of Liberal Judaism have the opportunity to join its rabbis in the creation of a new prayer book that is fit for a new generation.

“Since the dawn of a new millennium, alongside Liberal Judaism’s championing of equality, the new watchword has been inclusion. And so, in preparing this draft Shabbat morning service, we have considered how the individual may be included and enabled to participate.”

Other Liberal rabbis to contribute to the content of the Siddur, and form its Editorial Group, are Rabbis Janet Burden, Dr Margaret Jacobi, Dr René Pfertzel, Mark Solomon and Alexandra Wright.

Rabbi Mark Solomon, who wrote the text for Liberal Judaism’s same-sex and gender neutral ketubot, has prepared most of the feminised Hebrew sections, which will include the second blessing of the Amidah.

Rabbis Elli and Lea added: “Celebrating the diversity of belief within our congregations, Siddur Shirah Chadashah sings a new song, expressing a variety of authentically Jewish views of God in different ways, including with feminine God language.”