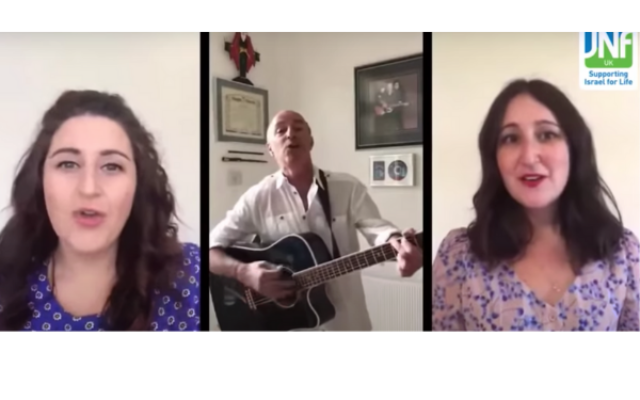 Stephen Melzack with his two daughters Louise and Cara

The Melzack family were crowned champions of the singing competition Song Ha’atzmaut organised by the Jewish National Fund UK (JNF) which drew thousands of viewers on Wednesday.

4,500 households tuned in to watch the competition marking Israel’s birthday and hosted virtually by the comedian Ashley Blaker in a media partnership with Jewish News. Judging entries were special guests Maureen Lipman, TV judge Robert Rinder and Rosalyn Miller, winner of the 2020 ‘Jews Got Talent’ contest.

Stephen Melzack and his two daughters, Louise and Cara, impressed judges with their rendition of the song This Land. Speaking after the event, the father from Edgware said: “I’m excited and delighted to have won with my daughters Louise and Cara, and to have contributed to Israel’s amazing achievement of its 72nd anniversary celebration and JNF UK’s continued work.”

Rinder praised the “absolutely gorgeous” performance and noted the Melzack family’s “real delight, enthusiasm” and noted “there was a real joy in that song.”

Lipman said: “I like the Melzacks, and I like their unashamed, simple passion. There’s some good voices. I was a bit worried when it started that it was going to be sort of a campfire song, but as it went on actually that chorus is very nice, very catchy and some good voices there.”

Miller said the performance “had a really good groove to it.”

Yonatan Galon, CEO of JNF UK, said on Thursday: “With thousands of viewers and hundreds of entries, Song Haatzmaut was a roaring success; testament not only to the creativity of our community and their abiding connection to Israel, but also to the commitment and generosity of the many partner organisations and bodies who came together to support the event.”

Richard Ferrer, editor of Jewish News, said on Thursday: “We were honoured to partner on this fun and innovative project. It’s always such a pleasure to work with JNF UK which, like Jewish News, places great importance on bringing people together.

“It’s never been more  important to unite the community than during this lockdown. Speaking personally, as a life-long Eurovision fan, Song Ha’atsmaut was the ideal replacement for this year’s cancelled song contest which Israel was bound to win. Its entry was even better than Netta.”