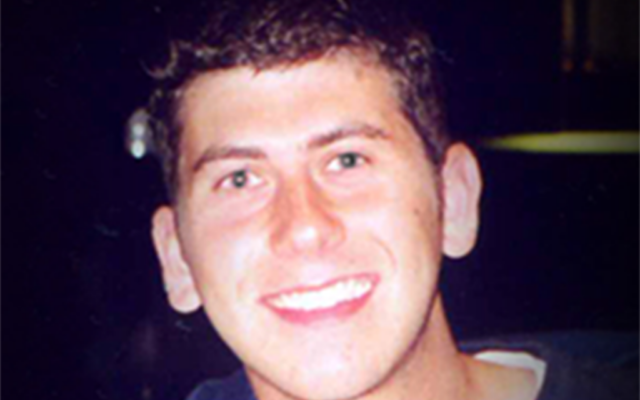 The mother of Yoni Jesner has said the UK should adopt an opt-out system for organ donation, 15 years after her son was killed in a terrorist attack in Israel.

Yoni, a 19-year-old from Glasgow, wanted to be a doctor and had registered as an organ donor before being killed on 19 September 2002 while in Israel on a gap year. His organs saved three lives, including that of a seven year old Palestinian girl.

This week his mother, Marsha Gladstone, addressed the issue of organ donation amid a renewed national debate over whether to extend the ‘opt-out’ system currently used in Wales, in which everyone is treated as an organ donor unless they opt-out.

In England, at present, people must opt-in to be considered a donor, but doctors feel an opt-out system would drastically cut the number dying needlessly – last year, more than 450 people died while waiting for a transplant.

“I am absolutely in favour of it,” said Gladstone, speaking to Jewish News on the 15th anniversary of her son’s death. “Everyone should be an organ donor. But there’s a misconception among Jewish people. A lot think that they’re not allowed to give their organs, that it’s not allowed by [Jewish] law, but it is allowed, definitely.”

Organs can be taken on death but the Jewish community has long debated whether ‘death’ means brain-death or heart-death. The difference can have a huge impact on what organs can be used.

“I believe that once your brain is dead everything else is going to close down, and that if you can save somebody’s life that’s the most important thing to do,” said Marsha. “But most in the Jewish community just don’t know. We don’t talk about it.”

Marsha speaks in Jewish schools throughout the country about her son and the foundation set up in his name, and said she had never even thought about organ donation until Yoni died.

“It’s ridiculous,” she said. “But then most of us don’t think about it or register until something happens to us or to one of our family members. I’d love to talk about this in schools, to sixth-formers perhaps, because they’re older.

“I’d say ‘imagine you’re lying in bed dying of a pulmonary disease, and you need a lung, or a heart, and you won’t survive without one.’ If you can give these kind of scenarios, or show them videos of those who need transplants, it would be so important. Then they can make their own mind up.”

Marsha recalled how, seven years ago, she was invited to take part in a thanksgiving ceremony organised by the Glasgow NHS Transplant Team.

“I’ll never forget it,” she said. “The service was held at the University, in an enormous venue, like a cathedral. There were 700 people there. Half were from donor families, half were recipient families. As it started, all the recipient families got up, came to the front and laid flowers. I get emotional even now, just thinking about it. It really was the most incredible thing. But it brings it home to you, that unless something happens to you in life, you don’t think about it.”

Yoni was in Israel studying at a yeshiva when a suicide bomber blew himself up on a bus in Tel Aviv exactly 15 years ago, killing six. Yoni’s mother has twice visited Yasmeen, the Palestinian girl (now aged 21) who received one of Yoni’s kidneys.

“He would have been thrilled,” said Marsha, reflecting how Yoni’s organs saved lives after doctors switched off his life-support two days after he sustained critical head injuries. “It wouldn’t have mattered to him what race or religion they were.”

She said her other children were “shocked” when first learning about the Palestinian recipient, but said: “They very quickly realised it was the right thing to do. It’s a hospital, it’s a person, it’s an organ and it’s a perfect match, so that’s the way it should be. To take politics into a hospital is so wrong, so wrong.”

She added: “My son Ari said at the time that saving a life is what’s important, it doesn’t matter about race or religion. These are the principles that we in the western world must uphold very strongly, particularly in Israel. And they do.”