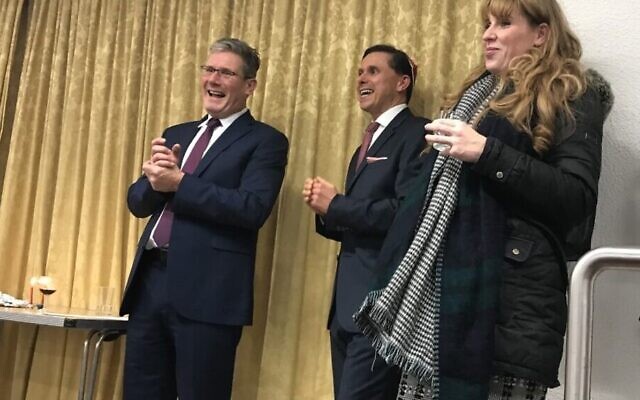 Angela Rayner has told Jewish News “nothing” would have prevented both herself and Sir Keir Starmer from attending a Jewish Labour Movement Chanukah celebration together.

Speaking at the end of a day in which there were new claims of tensions between the Deputy Leader and Starmer over his surprise front bench reshuffle, Rayner said:”Nothing would have stopped me and Keir from being here tonight.

“It was really important to be here under the circumstances in order to show that the Labour Party is changing – to give that solid message that we stand shoulder to shoulder with all our communities.”

Both Rayner and Starmer appeared at ease together as they appeared on stage at Belsize Square Synagogue in north London for a menorah lighting ceremony alongside Rabbi Laura Janner-Klausner, Rabbi David Mason and JLM officials Mike Katz and Adam Langleben.

Earlier claims that Rayner had been kept in the dark about Starmer’s front bench reshuffle had surfaced after the Deputy seemed unsure of the plans when questioned by media after she had given a well-publicised speech on cleaning up politics.

It later emerged Rayner had been called by the Leader to inform her changes were being announced.

Asked about rumours of a rift, she told Jewish News of the work she and Starmer had carried out together to combat antisemitism.

“All that work over the past 18 months we have done together incredibly important,” she said.

“We are discussing the issues that brought us into Labour again and not the things that stopped us participating.

“That the difference it’s made – we respect each other even though we have differences over ideas.

“We certainly don’t abuse each other.”

During Monday evening’s event Rayner joined in with the Chanukah songs after being handed a sheet with words translated from Hebrew.

Sources said she had been invited to the JLM event, where guests included Dame Margaret Hodge and Ruth Smeeth, in advance.

She told Jewish News: “I’m not a socialist if I do not believe in the right of everybody to feel as though this party is their home.

“The EHRC said what it said about us – you have to sit up and listen to that. You don’t make excuses, you deal with it.”