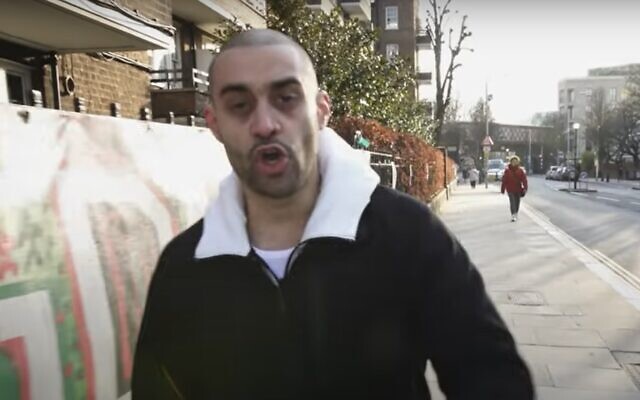 Controversial rapper Lowkey has pulled out of an National Union of Students centenary concert after concerns were raised by the Union of Jewish Students.

The NUS sparked outrage amongst Jewish student leaders after it emerged they had invited the performer to headline a centenary celebration event later this month.

Lowkey, whose real name is Kareem Dennis, has made a series of inflammatory and false statements, including expressing support for the former Labour MP Chris Williamson, and backing Professor David Miller, who was sacked from Bristol University after complaints from Jewish students.

On Friday afternoon NUS issued a statement confirming Lowkey had now pulled out of the event.

They said: “Lowkey was due to speak at Liberation Conference on 30 March. He has pulled out of the event and will no longer be appearing.”

Coventry South MP Zarah Sultana, who once sat the national executive council of the NUS, is also slated to appear at the NUS 100th Birthday Party at Liverpool Guild on 30 March.

Sultana was forced to apologise for a tweet made during her student days saying she would “celebrate” the deaths of Tony Blair and Benjamin Netanyahu.

In other now deleted tweets she said students who “go to Zionist conferences and trips should be ashamed of themselves” because they were advocating “racist ideology”.

In 2015, Sultana also wrote of her support for “violent resistance” by Palestinians.

Lowkey continued to court controversy with comments made only this week in an online appearance with the anti-Israel activist Asa Winstanley, where he discussed the Jewish background of Ukraine’s President Zelensky. 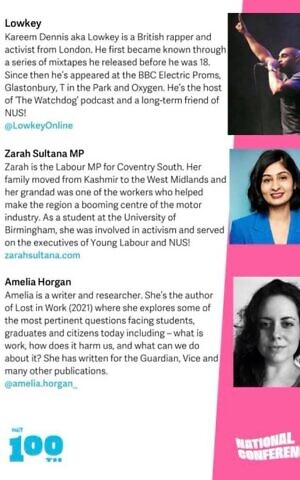 In remarks about NATO, Lowkey said: “NATO’s ability to subsume Nazis across the last 50, 60, 70 years can you tell us a bit about that?”

The 35 year-old rapper has enjoyed moderate musical success, attempting to fuse political content into raps such as his single Long Live Palestine.

His debut album Soundtrack to Struggle entered the chart at number 57.

Jewish News understands the Union of Jewish Students had already met with NUS representatives to discuss Lowkey’s appearance at the centenary event.

In a 9 March meeting, NUS officers allegedly told UJS representatives they were “unaware” of Lowkey’s past comments and that the event would go ahead as planned.

In a statement UJS President Nina Freedman said the decision to invite Lowkey was “simply unacceptable.”

Freedman added: “NUS have completely disregarded the impact Lowkey’s performance, and his presence, will have on Jewish students and these ‘mitigations’ are woefully inadequate.

“How are Jewish students supposed to feel included in the wider student movement when NUS choose a figure who has actively and publicly attacked UJS and spread conspiracies about Jewish students, 9/11 and the war in Ukraine, as the most appropriate performer for their 100th birthday celebration?”

It is understood that just days earlier, when Jewish students tried to register for the conference, they found that there was no option for kosher food, whereas all other dietary requirements, including vegan and Halal food, were catered for.

UJS’s Freedman added: “This speaks to a wider problem of NUS failing to make Jewish students feel at home within their movement.

“Their omission of a kosher food option is symptomatic of a harmful mindset in which Jewish students are an afterthought. We have tried to engage in good faith to work with them to make NUS welcoming for Jewish students, but time and time again NUS have brushed Jewish students aside.

“This incident is just the latest update in years of division and exclusion. Enough is enough.”

Last week Board of Deputies President Marie van der Zyl add her voice to the growing condemnation of the NUS event.

“We are disturbed that NUS has invited Lowkey to perform at its conference. Lowkey is an infamous conspiracy theorist whose delusional output has long been of concern within the Jewish community,” she said.

“We hope NUS will stop ignoring the anger and dismay of Jewish students at its decision and will reconsider its choice of performer.”