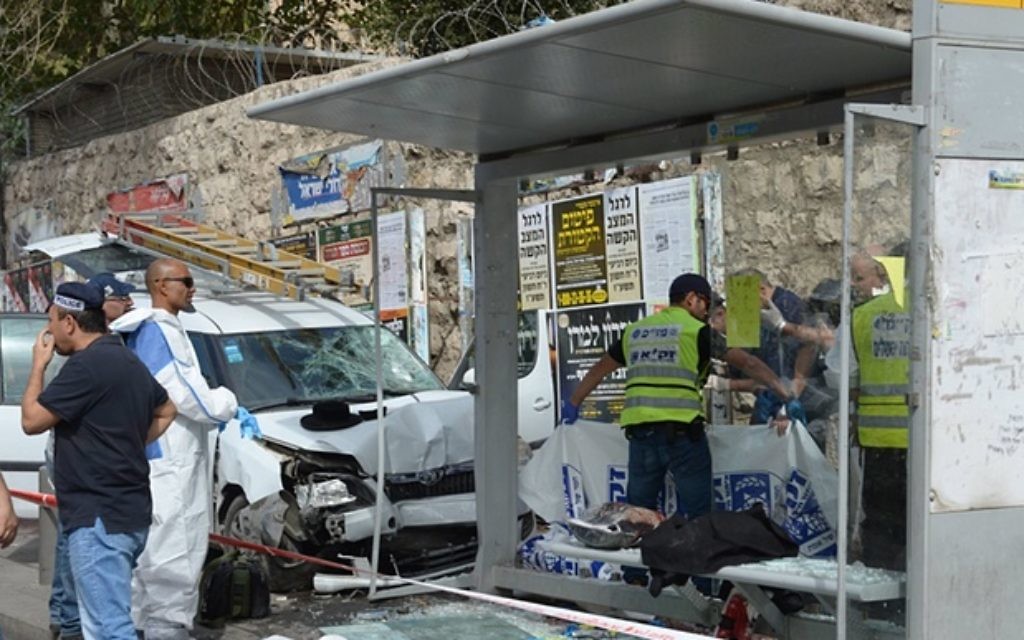 by Brendan O’Neill, Editor of Spiked-Online.com

It’s been clear for years that the left has been losing the moral plot. But I never thought I would see it apologise for, even defend, the stabbing to death of Jews. The silver lining for the left is that it’s impossible for it to sink any lower. This is as low as it gets.

The response in the West to the spate of foul murders by car, knife and meat cleaver in Israel has been almost as shocking as the killings themselves. Many have stayed silent, a global version of “bystander culture”, where people look awkwardly at the ground as someone is battered in front of them. The Western media is currently a shameless shuffling bystander to murders in Israel.

Others have asked, “Well, what do Israelis expect?” The crashing of cars into rabbis waiting for a bus and the hacking at Israeli citizens doing their weekly shop is treated as a normal response by Palestinians to their woes.

When the Guardian glorifies these killings as a “knife intifada”, and radical writers describe them as a natural kickback against Palestinians’ “ongoing humiliation”, they’re really saying Israeli citizens deserve to be murdered.

It’s understandable. It makes sense. These offerers of chin-stroking explanations for why a rabbi just had to be rammed with a car actually dehumanise both Israelis and Palestinians. They treat Israelis as collectively guilty for what their government does, meaning the old woman on a bus is a legitimate target.

A Palestinian terrorist drove his car into a bus stop, before getting out to hack survivors with a meat cleaver. (Photo credit: Amos Ben Gershom/GPO/Israel Sun(

And with their handwringing over “Palestinian despair”, with one writer claiming Palestinians are lashing out with knives because it’s “the only option left to them”, they infantilise Palestinians, reducing them to robotic knife-wielders who aren’t responsible for what they do. They heap contempt on both sides, demonising Israeli citizens and pitying Palestinians so much that they end up seeing them as mentally deficient, with no choice but to hack at the nearest Jew.

Worst of all, some in the West are supporting, implicitly, the killing of Jews with screwdrivers.

This week in New York, I saw what can only be described as a pro-stabbing demo: hundreds of anti-Israel activists hollering about Palestine being free “from the river to the sea, by any means necessary”. “Bombs, guns, knives — resistance is resistance”, said one.

In London, the keffiyeh-wearing, self-hating middle classes of the pro-Palestine lobby gathered to condemn, not the stabbings — don’t be silly! — but their bete noire, the thing they get out of bed every morning to rail against: Israel.

A protester tells Israelis to “go home to Poland” in central London on Saturday.

Such anti-Semitism would be shocking at any time. That it appeared now, during this stabbing spree, is truly disturbing. These Western radicals who have gathered to scream about Israel even as its citizens are being stabbed are fashioning a political narrative for the killings, elevating them to the level of a legitimate response to the situation in the Middle East. “Carry on killing” — that’s the implicit message.

Leftists are far more alarmed by Israel’s response to the stabbings than they are by the stabbings themselves. They’ve castigated Israel for putting more soldiers on the streets and for making it easier for citizens to buy guns (nothing freaks out the left more than a Jew with a gun). They seem to expect Israel to leave its citizens open to attack.

Echoing Haaretz writer Rogel Alpher, who wrote a demented column expressing his surprise that a Palestinian has never grabbed “a saw or a hammer and murdered me”, some Western radicals are not only glorifying the stabbings but are condemning those who have the temerity to protect themselves from being stabbed. Why won’t Jews let themselves be killed?

It’s so depraved. Whatever you thought of the PLO’s guerrilla activity in the 1970s, these stabbings are clearly very different. It’s anti-Semitism. That some Westerners are trying to present it as something else — a natural outburst of despair — says more about their busted moral compasses than it does about what’s happening in the Middle East.

Strip away the euphemisms, pick apart the talk of a “knife intifada”, and there’s no escaping the fact — the horrific fact — that some Westerners are defending the stabbing to death of people for being Jewish.

This is such a sad day for the left. What happened to that left which was the heir to the warriors of Enlightenment who helped liberate Europe’s Jews from their ghettos? That left which railed against the anti-Semitic “socialism of fools”? That left which, even in the darkest moment in human history — the Holocaust — risked life and limb to help Jews? It is dead. And that is a tragedy of epic proportions. T

The stabbings in Israel haven’t only exposed an ugly new Islamism in the Middle East. They have also exposed the moral disarray of those in the West who pose as progressive. The universalist, tolerant left that was sensitive to the scapegoating of Jews for the world’s problems is no more. And so it is left to Jews to defend Jews, bereft of left solidarity, the West merely shrugging its shoulders.