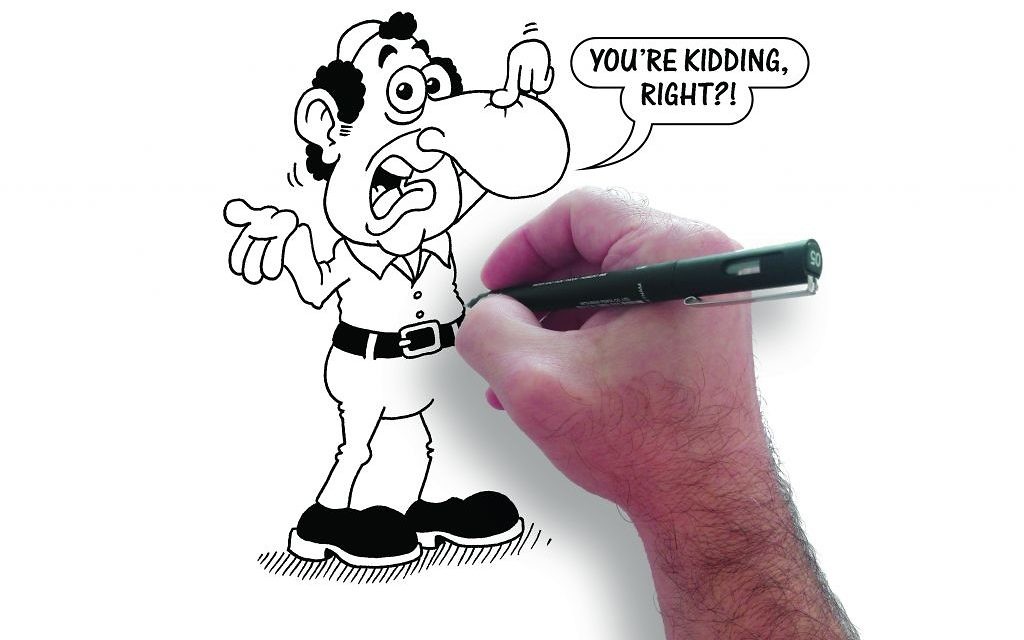 In the week that saw the comic genius Mel Brooks suggesting that “Stupidly politically correct society is the death of comedy,” our beloved editor forwarded a letter on to me that he had received from an angry reader, furious that my cartoon characters invariably sport large noses.  How dare I draw a Jewish character with a big nose!  This is pure anti-Semitism and the last thing you would expect from a Jewish newspaper.

It’s not the first time a Jewish organisation has picked on my noses.  “We loved your pictures, but can you tone down the noses?” I was asked by one of my Jewish clients.  That afternoon I performed more nose jobs than a Hollywood cosmetic surgeon might get through in a month (“So, how come all your Jewish characters have tiny little noses?  Are you anti-Semitic?”)

Just as the Simpsons are yellow and South Park characters invariably don’t have noses at all, my characters have big noses.

Anyone who might have seen the work I do for non-Jewish organisations (“Vot?  You cartoon out?!”) will have noticed that the characters I draw for them also have large proboscises.

I like drawing big noses.  They amuse me.  Strangely, those non-Jewish organisations never comment and simply accept the noses as part of my style – the very thing that brings them to me as clients in the first place, bless them.

Now, in most circumstances a letter from a furious reader (there have been a few) would be met with a dignified silence, much like criticism of the Queen.  However, there is a far more serious issue here that I think needs addressing. 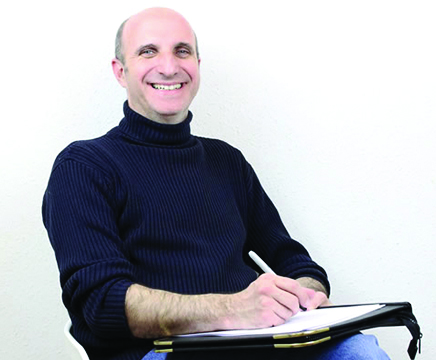 It’s the elephant in the room (sorry again).  5,000 years of marrying in is bound to result in the odd pedigree trait.

But, far from being a sign of ugliness, I think a large nose can be the making of a person’s face.  A woman I knew (who shall remain nameless) was really quite a beauty.  She had a large nose and it fitted her face perfectly. Heads turned when she entered the room for all the right reasons.  Sadly, she fell for the hype that suggests that a big nose is a bad thing and had rhinoplasty, resulting in a small, straight, “Meh!” of a nose.

Overnight this woman went from a head-turner to someone who just disappeared into the crowd.

Some of the greatest stars have become known for their Jewish noses – Jimmy Durante, Barbra Streisand and Barry Manilow to name but three (or possibly all!).  If a large nose comes on the TV, half the Jewish viewing public ask their partners, “Are they Jewish?  They look Jewish.”  An affirmative answer leads to a feeling of warmth and satisfaction, but finding out that this nose is on a non-Jew is crushingly disappointing.

Of course, I could be wrong.  In 1911, physical anthropologist Maurice Fishberg measured 4,000 noses of Jews in New York.  His study revealed that most of those he measured were actually unremarkable.  I must confess to never having measured another Jew’s nose.

Jews were negatively depicted with large hooked noses as far back as the late 12th century, but I think that most people’s current sensitivity is the result of the grotesque, hand-wringing images of Jews used in anti-Semitic Nazi propaganda from the 1930s and 40s.  But does that mean that every drawing of a Jew with a big nose is anti-Semitic?

However, there is definitely a stigma attached to Jewish noses (“Oy! A nose that big and you want to attach a stigma to it?!”).

The web is awash with articles on the subject.  Even poor old Pinocchio whose nose grew every time he told a lie is suggested to be a negatively stereotypical Jewish boy (“I knew him when he was Pincus!”).

Is it a conspiracy by cosmetic surgeons?  They certainly benefit hugely from the misconception that a large nose is a sign of ugliness.  Michael Salzhauer, a cosmetic surgeon from Miami, even went as far as to commission a music video called “Jewcan Sam” that followed the exploits of a boy who couldn’t get his girl because of his large nose.  He gets a nose job, but still fails to woo his lady because she only dates football players. The fallout from the video was huge, with both Salzhauer and the band he engaged, The Groggers, being accused of promoting anti-Semitic stereotypes (both Salzhauer and The Groggers are Jewish).  Lead singer, L.E. Doug Staiman, was actually given a free nose job by Salzhauer.

People know I’m Jewish because I look Jewish, not only because of my nose, but let’s be honest, it’s a big clue.

My nose isn’t (quite) as big as those I draw, but nor do I have three fingers on each hand or big oval eyes.

Cartoons can be a hugely powerful tool and people have suffered and even died as a result of them.  The influence of the Nazi cartoons still resonates today and I say it’s time to stop.  I’m not anti-Semitic.  Quite the reverse.

I love Jews and being Jewish and while I am not very religious, I celebrate the fact that as a Jewish cartoonist, I’ve grown up witnessing Jewish life with all its wonderful quirks.

Am I anti-Semitic if I draw a disapproving or over-protective mother?  A kvelling booba?  A yachna? A food-obsessed zeida? It’s the stuff that Jewish comedy has been built on for years.  And don’t get me started on money (“Did he mention Jews and money? Quick Golda, fetch my pen!”).

I wouldn’t be so glib as to suggest that anyone upset by my noses should simply get a sense of humour.  After all, none of us can help reacting to things that press our buttons and I understand how emotive noses can be.  But I am proud of my Jewish nose.

As mentioned earlier, I don’t draw Jews with bigger noses than those of my other characters, but would it be a crime if I did?  After all, I would draw them out of affection, not hate.  Perhaps I should.

Let’s take back our noses once and for all!