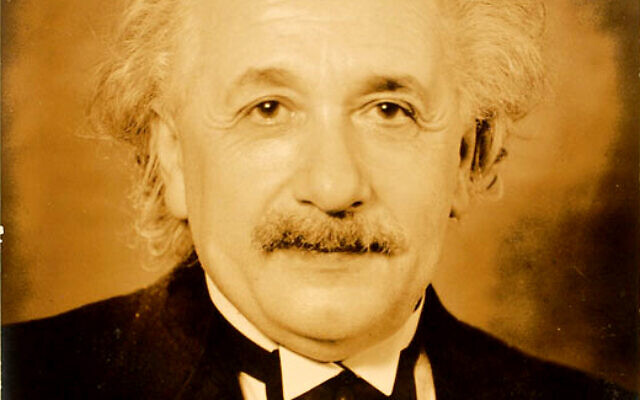 Einstein while at Princeton in 1935

A rare handwritten, signed letter by Albert Einstein, criticising Britain for appeasement, is up for auction.

The letter, addressed to the Danish journalist Karen Stampe Bendix in 1936, was written amidst rapid Nazi mobilization.

The letter has echoes in today’s conflict in the Ukraine – Western countries are again faced with deciding whether Russian threats and aggression can be halted through diplomacy or by sending military assistance to Ukraine.

Despite being a passionate pacifist, Einstein insists the world has no choice but to confront Germany and even seize the initiative in taking up arms.

And he castigates the conciliatory stance of the powers of the free world – particularly the London government for not standing up to Hitler in the hope he would halt his conquests.

The letter, which is up for aucition at Kedem Auction House in Jerusalem, says: “Most regrettable is the feeble stance of England, insofar as it indeed postpones the start of war, but certainly cannot prevent it. It would have been best to intervene already three years ago. There are diseases that cannot be overcome without surgery. I cannot deny this even though I abhor the knife.”

It is not dated but is thought to have been written in 1936 – two years before the Munich Agreement beween Britain and Germany which was hailed by UK Prime Minister Neville Chamberlain as “peace in our time”. But Hitler ordered the invasion of Poland which sparked the Second World War just 13 months later.

Einstein implores Stampe to take comfort in her own situation – Denmark, her native country, “is unthreatened by the impending turbulence”. He promises her that “even if it is economically difficult, there is yet strange consolation in that no place on earth is in a better situation.”

But his hopes were in vain – despite a nonaggression pact it signed with Germany, Denmark was attacked and occupied by Nazi German forces in 1940.

The letter also tells her about the mood in the United States: He says: “There is heavy unemployment here as well, and unlike the situation in the past, [there is] a mood of pessimistic resignation with the state of affairs. On the other hand, the difficult circumstances here have not led to the heated political passions so familiar to us from Europe.”

Einstein, whose General and Specific Theories of Relativity turned our understanding of the physical world and the stars upside down, regarded himself as a passionate pacifist.

“With every fiber of his being, he opposed military conflict in all its forms,” said Meron Eren, chief and co-founder of Kedem Auction House.

“Despite his longstanding commitment to pacifism, Adolf Hitler’s aggressive territorial ambitions convinced Einstein that Nazi ideology posed a clear and present danger to both European Jewry and European civilization, and that Hitler must be stopped at all costs, sooner rather than later.”