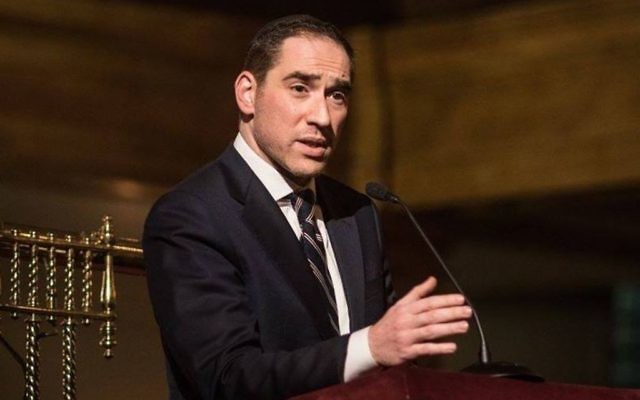 Rabbi Joseph Dweck, Senior Rabbi of the S&P Sephardi Community, has held on to his job after a ruling by Chief Rabbi Ephraim Mirvis’s review committee.

But Rabbi Dweck has had to pay a high price — he has had to relinquish being a dayan on the Sephardi Beth Din, and to agree to submit the contents of his public lectures to a member of the review committee. He has also agreed not to return to his former congregation in New Jersey to be a summer scholar-in-residence, as he has done for the past three years.

Rabbi Dweck gave a controversial lecture on homosexuality and Jewish teaching in May. Two weeks after his lecture, he was furiously attacked by Rabbi Aharon Bassous of the Golders Green Sephardi congregation, Kehillat Yehezkel.

Rabbi Bassous took issue with many of Rabbi Dweck’s other halachic rulings, and complained that he had challenged the teachings of other rabbis.

In the wake of Rabbi Bassous’s attack on Rabbi Dweck, Orthodox rabbis worldwide weighed in with their opinions, some supportive of the American-born rabbi, some fiercely critical.

The turning-point came when the Sephardi Chief Rabbi of Israel, known as the Rishon l’Zion, Rabbi Yitzhak Yosef, wrote to rabbis from the Syrian community in New York for which Rabbi Dweck had worked before coming to London.

Rabbi Yosef — who is related to Rabbi Dweck’s wife, Margalit — told the Syrian rabbis that Rabbi Dweck was “not qualified” to be a rabbi and urged his former colleagues to dissociate themselves from him.

This was followed by a swingeing attack on Rabbi Dweck by the Gateshead Rav, Rabbi Shraga Feivel Zimmerman, and by 60 anonymous rabbis who wrote an open letter to Chief Rabbi Mirvis warning him that he would “split Anglo-Jewry” if he did not ensure that Rabbi Dweck lost his job.

An attempt by the Rishon l’Zion to persuade Dayan Lichtenstein, of the Federation Beth Din, to assemble a Beth Din to “try” Rabbi Dweck, failed. Chief Rabbi Mirvis said firmly that he would have nothing to do with such a “kangaroo court’.

However, when the Rishon l’Zion gave his blessing to Chief Rabbi Mirvis solving the problem by whatever method he chose, the way was clear for the British chief rabbi to put together a review committee.

It comprised three of the most eminent Torah leaders of Anglo Jewry – Dayan Chanoch Ehrentreu, Dayan Menachem Gelley and Dayan Abraham David. Additionally, in the interests of what the Chief Rabbi’s Office called “natural justice”, the QC, Professor Julian Lew, attended the deliberations.

The committee noted Rabbi Dweck’s “sincere contrition” and praised his work as an inspirational rabbi of the Sephardi community since his arrival in London.

But it also observed that “Rabbi Dweck readily acknowledged that he had not always issued halachic rulings in a responsible manner and at times incorrectly. In particular, he recognised that in the course of a wide range of his teachings, he had cited rabbinic sources and views on halacha [Jewish law] out of proper context and he had cited halachic rulings and hashkafa [Jewish world view] in a way which may have misled those listening. Rabbi Dweck also expressed a deep sense of regret over his inappropriate comments about sayings of the Sages and derogatory comments about rabbis”.

It is understood that more than 30 rabbis attended a meeting at Chief Rabbi Mirvis’s home on Tuesday to be briefed about the decision of the review committee. The Rishon l’Zion has been kept informed and Rabbi Dweck himself, describing the whole furore as “a painful experience” not only personally, but for his wife and family, has issued a statement expressing regret that “there were instances where I spoke in a fashion that was inappropriate and imprudent”.

But he, his congregation, and Chief Rabbi Mirvis himself, have deprecated the personal nature of the attacks against him.

Rabbi Dweck said: “Whilst some of the criticism was justified, the vitriolic tone and ad hominem nature of some of the attacks made substantive engagement with the issues all but impossible”. Sabah Zubaida, the parnas presidente of the S&P Sephardi Community, which broadly supported Rabbi Dweck, said that the rabbi had “been subjected to a series of regrettable personal attacks that went well beyond any reasonable dispute on issues of approach to Jewish law”. The congregation welcomed the ruling and described Rabbi Dweck as “a truly inspirational leader for us”.

Chief Rabbi Mirvis said he had been “appalled by some of the conduct we have witnessed in our community” and spoke of “poisonous invective” from both sides of the controversy. He “implored” the community “to resist the urge to sow further discord and division. Now, more than ever, we must stand together”.

Welcoming the ruling, Jonathan Goldstein, chairman of the Jewish Leadership Council, said: “I would like to express my thanks and appreciation to Chief Rabbi Mirvis for his leadership and for the thoughtful way in which he and the review committee have resolved what has clearly been a complex and sensitive matter.

“The studious deliberations of and constructive approach adopted by the Chief Rabbi and his fellow committee members have led to an outcome that allows us to move forward together as a united community.

“Rabbi Dweck is a passionate spiritual leader who has been very successful at sharing his enthusiasm and connecting with congregants from all walks of life. I am happy he will be able to continue this important work for the benefit of the entire British Jewish community.”

The former chief rabbi, Lord Sacks, also welcomed the result. He said: “I support the resolution achieved by Chief Rabbi Mirvis and his review committee in bringing this painful matter to a peaceful conclusion and commend them for their tireless efforts in doing so.

“Rabbi Dweck has made, and will continue to make, a significant contribution to our community and to the Jewish people and will emerge stronger from this intense process of reflection on the burdens and responsibilities of rabbinic leadership.”