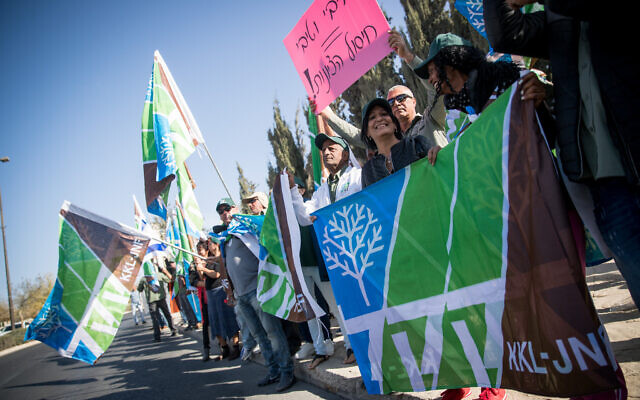 KKL-JNF Workers holding signs and flags during a protest outside the Prime Minister's Office in Jerusalem,

The Movement for Reform Judaism (MRJ) and Liberal Judaism urged it not to continue with its plans, saying the “development of settlements endangers the two-state solution to peace in the Middle East”.

It follows reports that KKL-JNF was considering buying private Palestinian land in Area C of the West Bank, potentially for hundreds of millions of dollars, for the development of existing settlements, as reported by respected Israeli news site Walla.

It is rare for either MRJ or Liberal Judaism to comment on events in the Middle East, even rarer to do so together. They said they “hope the growing worldwide objection to the purchase will persuade the JNF to change its mind”.

It follows criticism from the Masorti progressive movement a day earlier. It said KKL-JNF’s plans would “damage its legitimacy in Israel and among Jews around the world and may even endanger its very existence”.

Masorti further called on KKL-JNF, which has long collected money from British Jews, to adhere to “the principle of Zionist consensus… of recognising and respecting different approaches to the actualization of Zionism”.

MRJ and Liberal Judaism said they “always work towards a strong and secure State of Israel”, including if this meant “opposing unilateral measures that may adversely impact attempts to reach peace, especially in the Zionist national institutions which aim to represent the whole of world Jewry”.

Masorti said further settlement expansion would “severely damage Israel’s foreign relations”, adding: “This is not just a policy issue, but a much bigger question about the future of the Zionist movement.”

Some Israeli national institutions had seemingly been “taken over by extremists”, said Masorti, with the purchase of Palestinian land to build West Bank settlements representing a major policy shift. KKL-JNF rejected this.

In response to the publicity, it said it had discussed “general principals of action, based on a legal opinion,” adding: “At this stage, there is no intention of opening up a new area in Judea and Samaria.”

JNF UK said it was “a wholly independent UK registered charity that is separate from all other organisations bearing the shared Jewish National Fund name”. It added that all the charitable work it does “takes place within the Green Line of the 1949 Armistice border and meets its objects, UK charity regulations and best practice”.