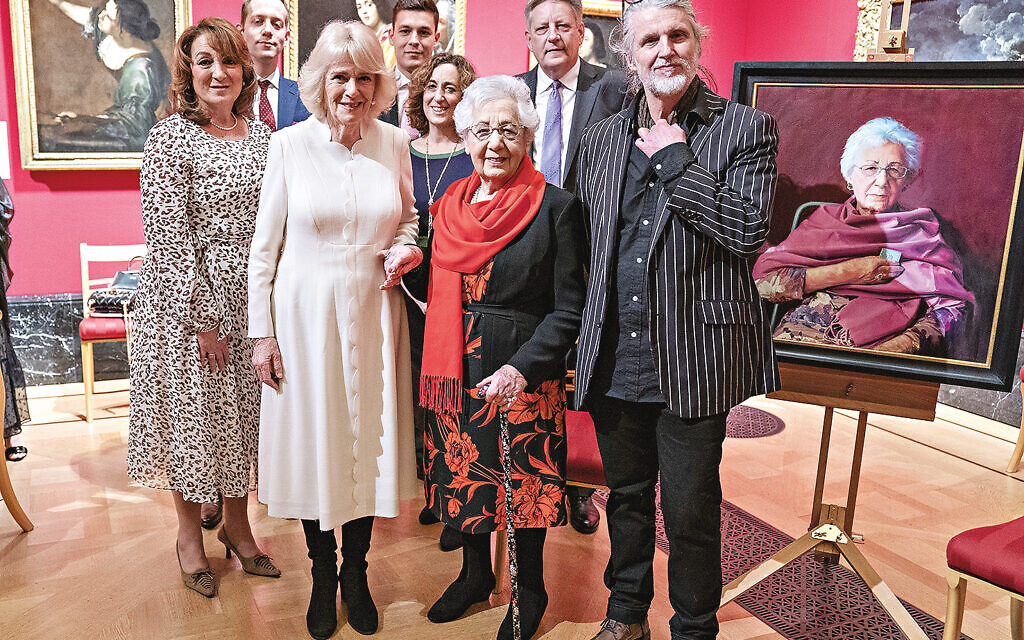 he Duchess of Cornwall with Holocaust survivor Helen Aronson (centre) and her family, and artist Paul Benney (right) beside the portrait of Helen during an exhibition at The Queen's Gallery, Buckingham Palace, London, of 'Seven Portraits: Surviving the Holocaust', which were commissioned by the Prince of Wales to pay tribute to Holocaust survivors. Picture date: Monday January 24, 2022.

Prince Charles this week spent an emotional hour with Holocaust survivors and the artists he commissioned to paint their portraits for the Royal Collection.

The heir to the throne – who a decade ago came up with the idea for a Jewish community centre in Krakow after witnessing the plight of survivors there – asked leading painters to produce artworks of seven camp survivors to help ensure their stories live on.

The artworks featuring Helen Aronson, Lily Ebert, Manfred Goldberg, Arek Hersh, Anita Lasker Wallfisch, Rachel Levy and Zigi Shipper will go on display in The Queen’s Gallery at Buckingham Palace from today until 13 February before moving to the palace of Holyroodhouse in Edinburgh.

Ahead of the broadcast of a BBC documentary tonight tracing the year-long project, His Royal Highness and the Duchess of Cornwall spent time on Monday separately chatting to each of the survivors and their families at the Gallery, and admiring the artwork. Charles, who is patron of the Holocaust Memorial Day Trust, told Auschwitz survivor Zigi, 92: ‘I am so pleased this has been possible. I was so worried. I wanted to capture as many [of you] as we could. To remember what you have been through.” 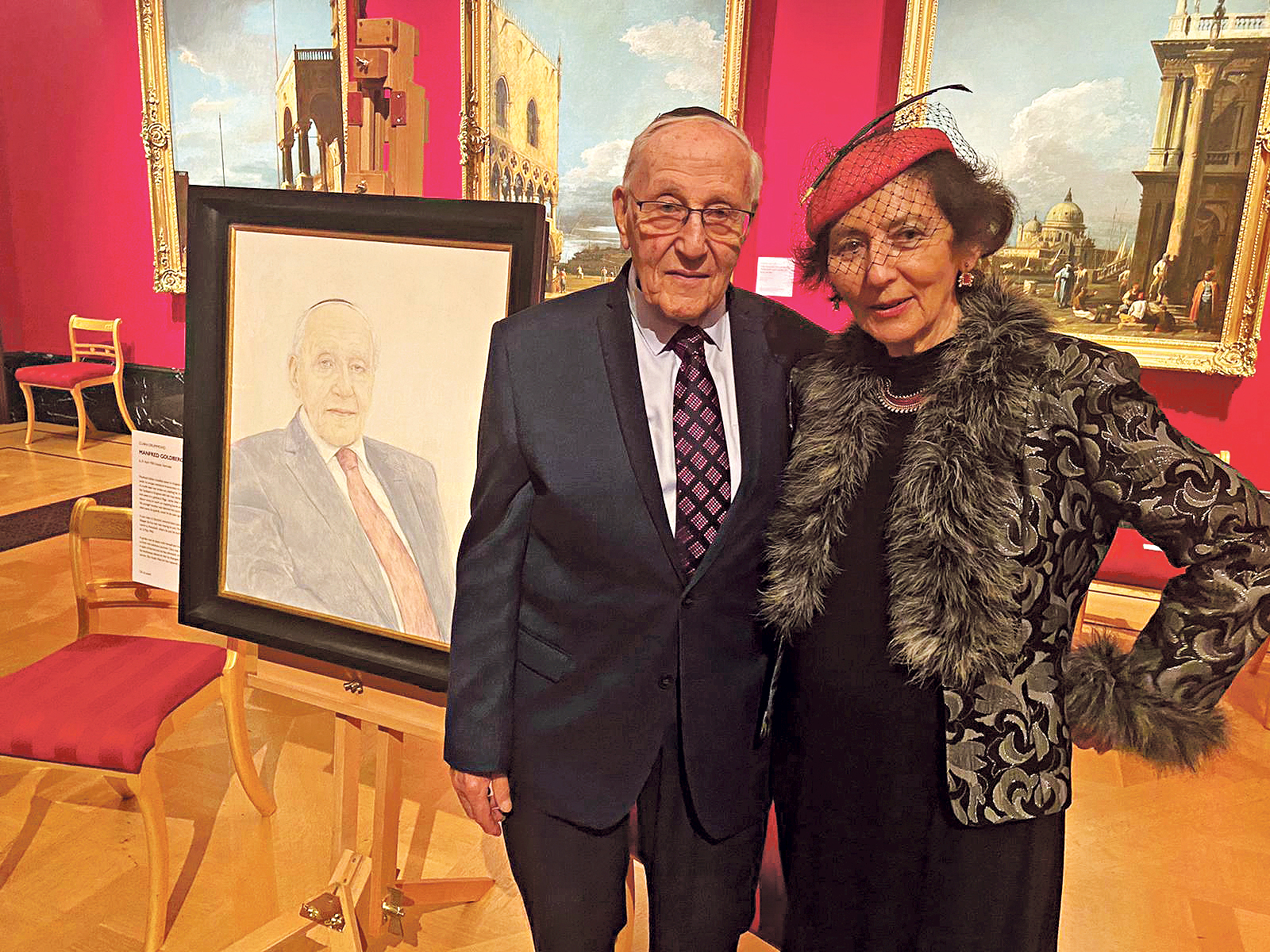 The Poland-born survivor – who has spent the last 30 years speaking to young people to educate them about where intolerance can lead – thanked HRH for coming up with the idea and said afterwards: ‘I feel this is a tribute to all victims of the Holocaust – this is as much for the ones who didn’t survive. These are representations of all of them, men and women.” His daughter, Michelle, added: ‘He’s gone on to have a very happy life. Dad always says if he could see Hitler now he would show them his family and say ‘you didn’t win’.“

Also meeting the Royal couple was Helen Aronson BEM, 94, who was one of only 750 Polish Jews who survived the notorious Łódź (LODZ) ghetto from the 250,000 who entered it. She touched her chest and told Camilla: “It just stays there, just stays there all the time. I can never forget.” Helen, a mother of two daughters, two grandsons and a great-grand-daughter, said: ‘I got a very secretive message to call Lord Rosalyn [the Master of the Prince of Wales’ Household] on a particular day and time along with a member of my family. When I found out I was with my daughter Annie and I was crying and laughing. To be chosen by Prince Charles to have my portrait painted was such a great honour.” 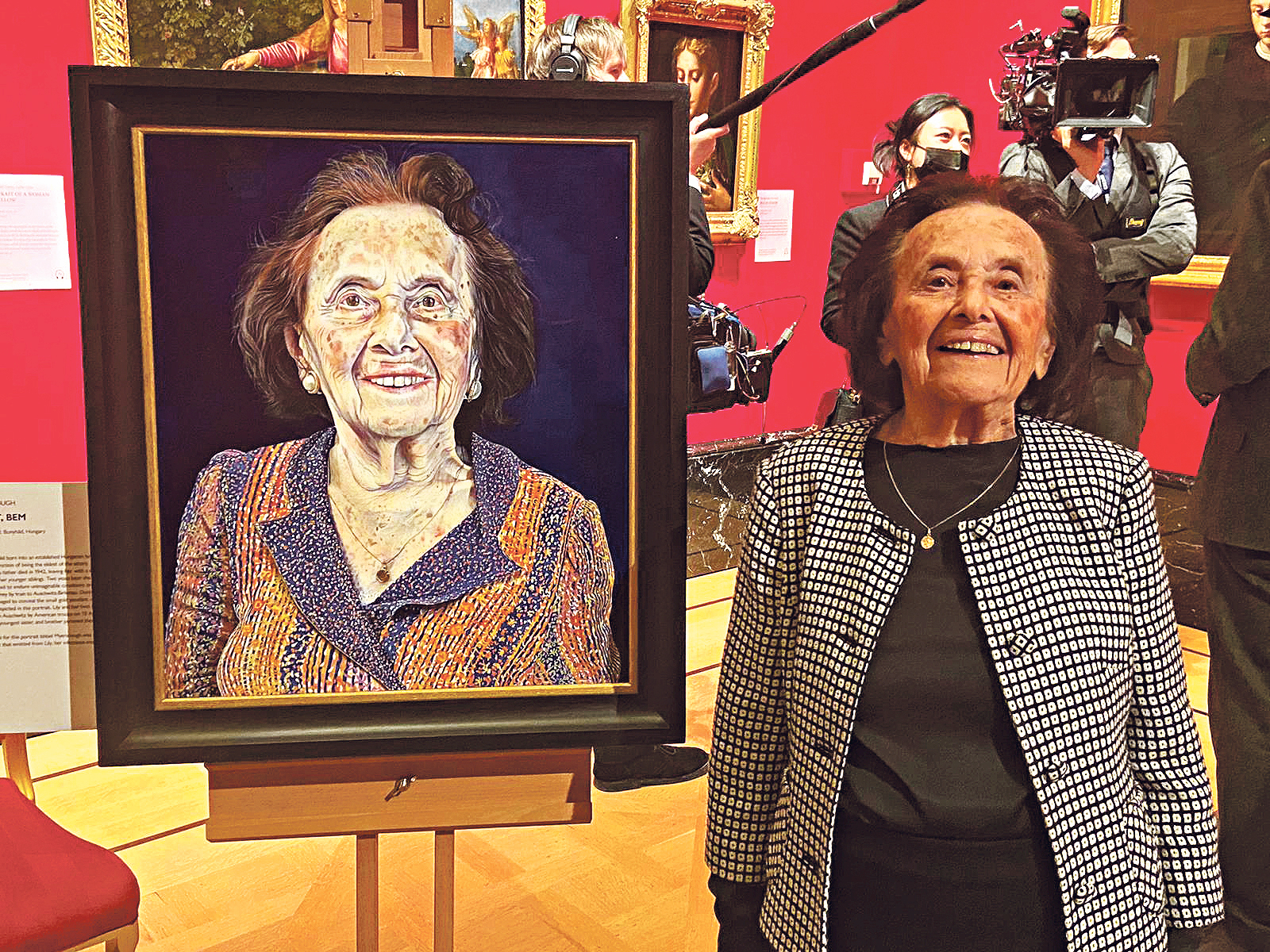 Describing the portrait as “absolutely true to life”, she added: “It has been an unforgettable day.

“I give a lot of talks [about the Holocaust] and one day a lady stood up and she said to me ‘Do you not feel guilty that you are alive and all these people died?’ I thought to myself ‘how do I answer that?’ Then I said ‘maybe for a reason that I can use my voice and tell you about it.’ It was complete luck that the Russian army came very quickly to our camp and we were liberated by them. Seven graves were ready on the cemetery for us, waiting for them to kills us. I saw them with my own eyes.”

The Prince of Wales was moved after 98-year–old Lily Ebert BEM showed him her concentration camp tattoo and a gold medallion belonging to her murdered mother that she smuggled out of Auschwitz. After she expressing her delight at meeting the prince, Charles, clasping her shoulder, said “It is a greater privilege for me.” 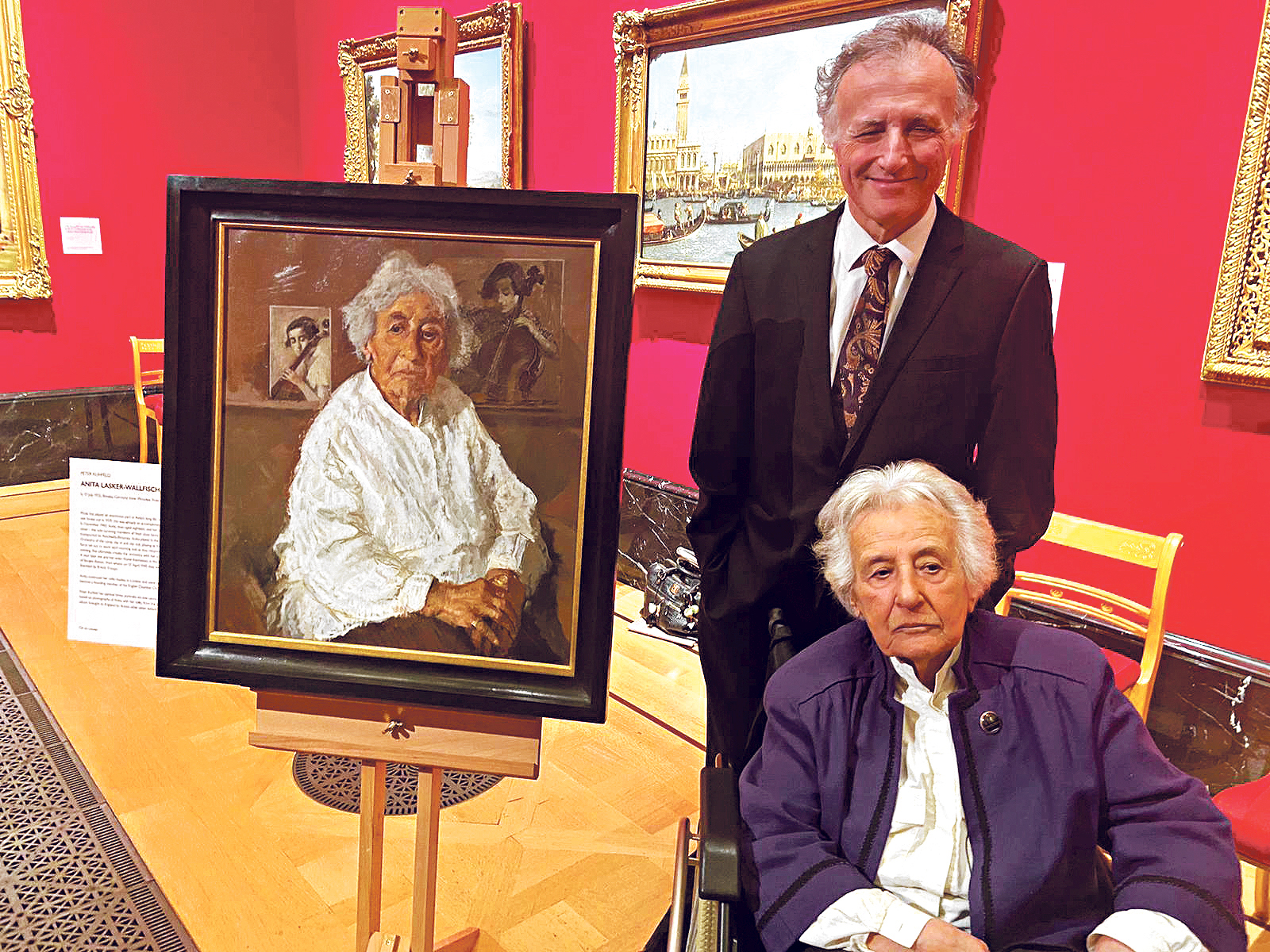 Camilla added: “It’s an absolutely lovely portrait. What’s wonderful is that it is here forever [in the Royal Collection]. It’s been so wonderful to meet you, it’s been a huge pleasure. I hope we’ll meet again.’ The duchess told her watching family – including great-grandson, Dov Forman and Bilha Weider: “She is just incredible, isn’t she? She is such a strong lady. This was obviously meant to be.”

Weider said: “She was at the depths of hell, with people who didn’t even validate them like an animal. This isn’t just any old painting. This is a painting of people who were the bottom of the pile and now they are at the top of the pile.” 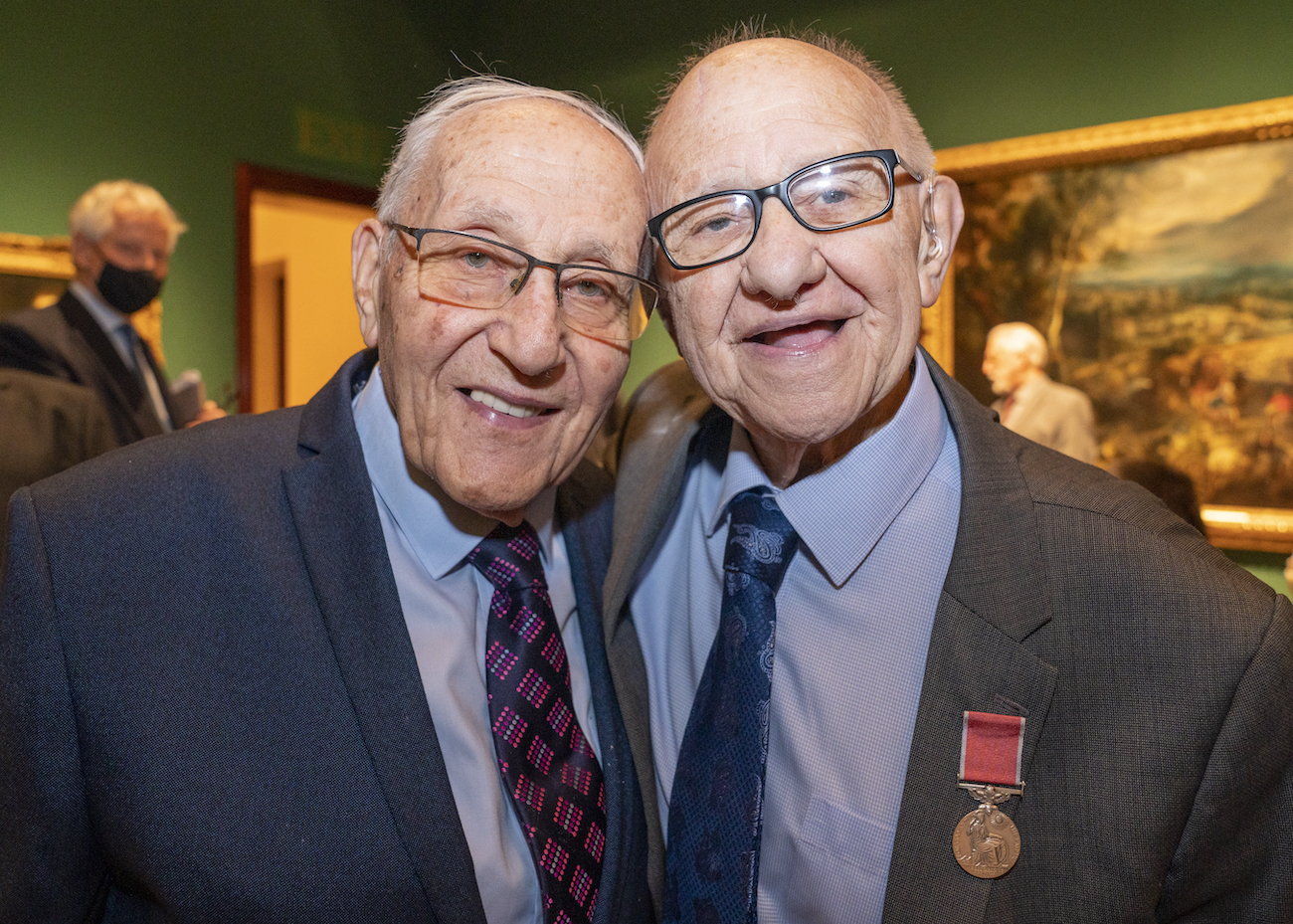 Holocaust survivors Manfred Goldberg and Zigi Shipper (right) attend an exhibition at The Queen’s Gallery, Buckingham Palace, London, of ‘Seven Portraits: Surviving the Holocaust’, which were commissioned by the Prince of Wales to pay tribute to Holocaust survivors. Picture date: Monday January 24, 2022.

The artists to take part were Paul Benney, Ishbel Myerscough , Clara Drummond, Massimiliano Pironti, Peter Kuhfeld, Stuart Pearson Wright, Jenny Saville and Stuart Pearson Wright, who painted Rachel Levy during lockdown. She recalled her daughter Theda, six, asking about her subject and being so touched she wrote a letter to her. Rachel wrote back and they had this exchange and resulted us as a family and having a tea party with her. It has blossomed into a very strong connection. Rachel is the ultimate female role model. Forget Wonder Woman, Rachel is the kind of women I want my daughter to look up to. She has courage, dignity, and her good humour she has maintained through all the terrible atrocities she has been though.”

Olivia Marks-Woldman of the Holocaust Memorial Day Trust, which played a part in the project, told Jewish News: “To celebrate survivors in such a timeless portrayal is a powerful act of affirmation. We often hear survivors say that Britain has become a dear home for them – a safe and accepting place where they have been able to rebuild their lives. His Royal Highness has created something profoundly meaningful and hope-giving.”

The prince said of the project: “As the number of Holocaust survivors sadly, but inevitably, declines, my abiding hope is that this special collection will act as a further guiding light for our society, reminding us not only of history’s darkest days, but of humanity’s interconnectedness as we strive to create a better world for our children, grandchildren and generations as yet unborn; one where hope is victorious over despair and love triumphs over hate.” 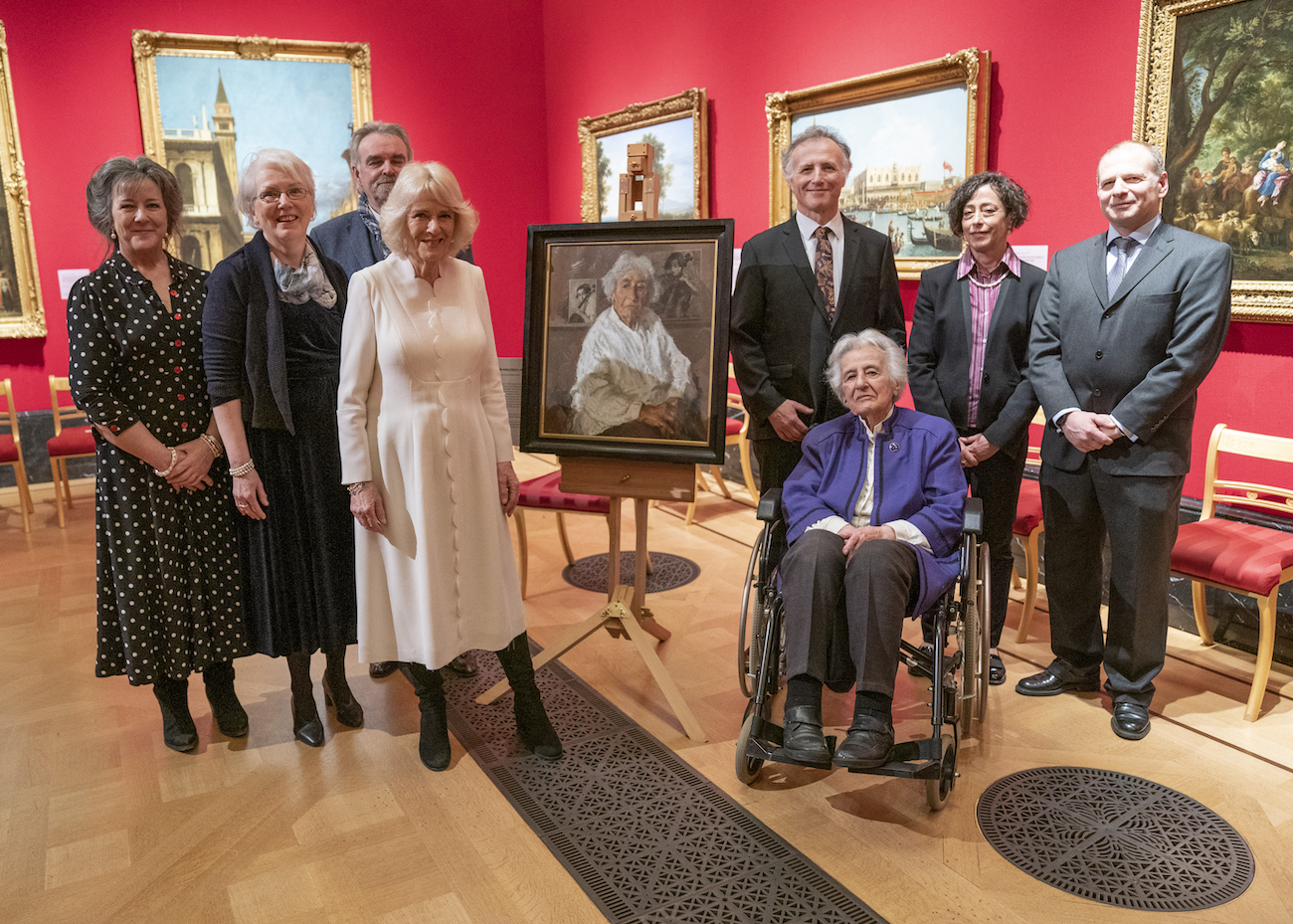 The Duchess of Cornwall with artist Peter Kuhfeld and Holocaust survivor Anita Laskar-Wallfischof (front right) and her family at an exhibition at The Queen’s Gallery, Buckingham Palace, London, of ‘Seven Portraits: Surviving the Holocaust’, which were commissioned by the Prince of Wales to pay tribute to Holocaust survivors. Picture date: Monday January 24, 2022.