Mental health charities have experienced a “horrendous increase” in referrals during the latest coronavirus lockdown, with young people aged 16 to 25 and those who look after them particularly hard hit.

Jami said the number seeking help overall had more than doubled, with the workload of some services almost tripling, as the extended national restrictions have either exacerbated existing problems or caused new ones.

Inquiries from those who look after young people had also soared by 170 percent. “They don’t know what to do, how to help, or where to get support,” a charity executive said this week.

Likewise, Stamford-Hill based Bikur Cholim chief executive Yocheved Eiger said the Charedi charity had seen “a huge increase [in referrals] plus calls from people from outside the Stamford Hill area, including the north-west”.

She said people were “far more isolated, which means they are at greater risk, with less support and less opportunity for people to identify and respond to issues”, adding that there had been “a huge increase in crisis support”.

Despite an increase in the charity’s resources, this was still not enough, Eiger added ominously. “We have recruited more support workers and more therapists – and still aren’t meeting demand.” 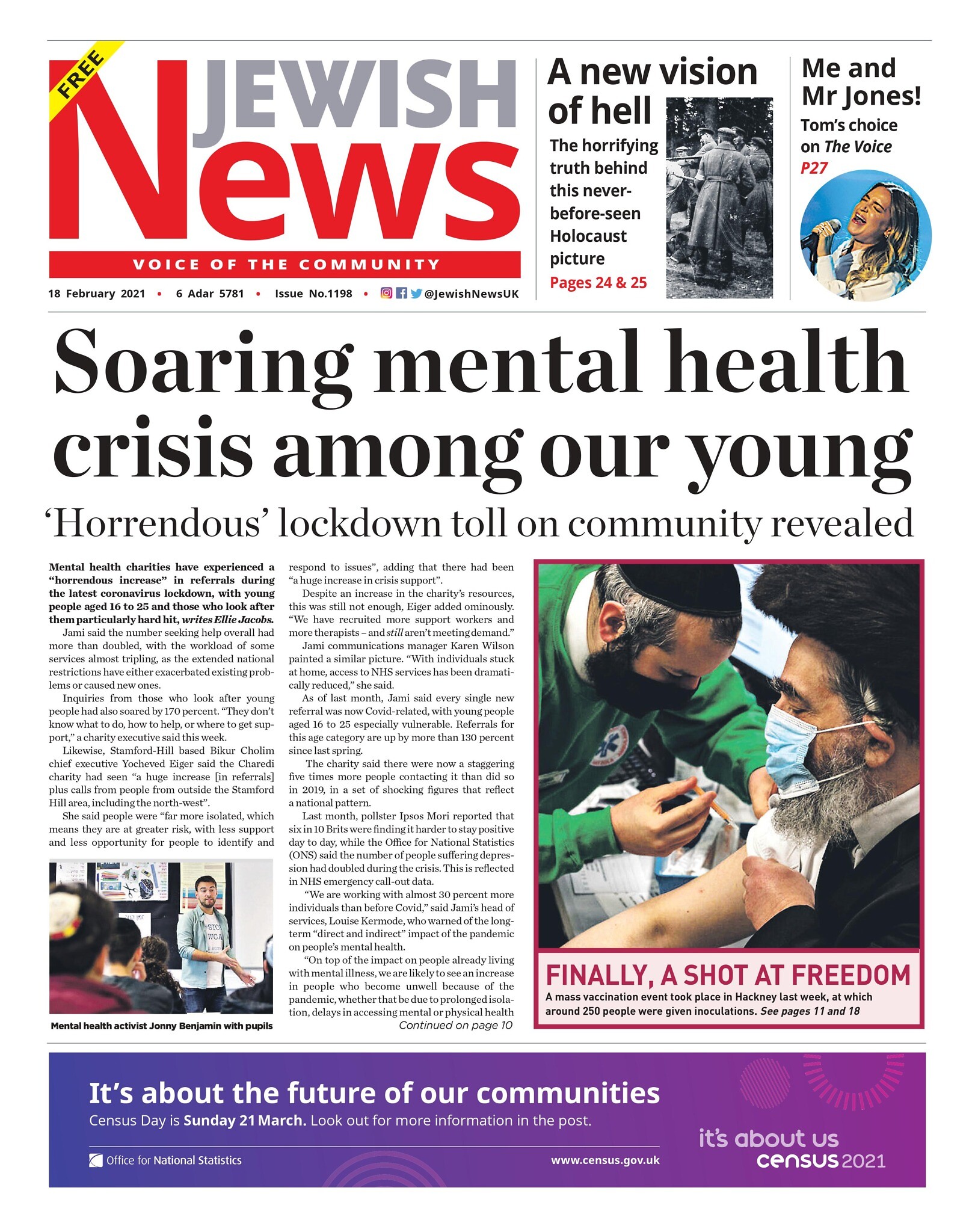 As of last month, Jami said every single new referral was now Covid-related, with young people aged 16 to 25 especially vulnerable. Referrals for this age category are up by more than 130 percent since last spring.

The charity said there were now a staggering five times more people contacting it than did so in 2019, in a set of shocking figures that reflect
a national pattern.

Last month, pollster Ipsos Mori reported that six in 10 Brits were finding it harder to stay positive day to day, while the Office for National Statistics (ONS) said the number of people suffering depression had doubled during the crisis. This is reflected in NHS emergency call-out data.

“We are working with almost 30 percent more individuals than before Covid,” said Jami’s head of services, Louise Kermode, who warned of the long-term “direct and indirect” impact of the pandemic on people’s mental health.

“On top of the impact on people already living with mental illness, we are likely to see an increase in people who become unwell because of the
pandemic, whether that be due to prolonged isolation, delays in accessing mental or physical health services, being unwell or bereaved by Covid,
or the financial impact.” 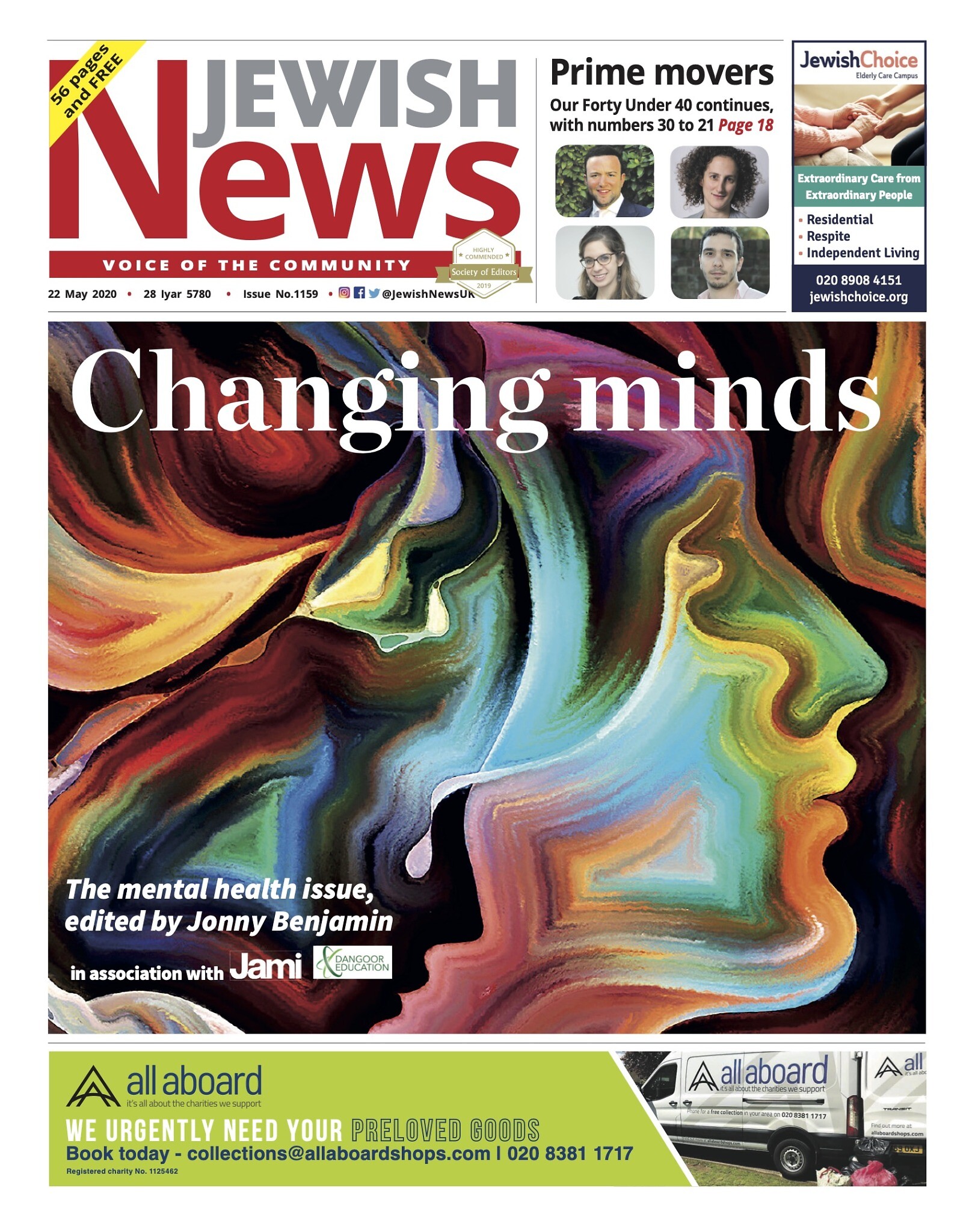 Professor Wendy Burn, president of the Royal College of Psychiatrists, has said experts fear the lockdown is simply “storing up problems, which could then lead to a tsunami of referrals” once all restrictions are lifted.

“Amid the uncertainty and disruption, the things that usually protect our mental health may not be available to us, or just not enough to counter the impact of Covid and lockdown measures,” said Kermode.

The Jewish community’s foremost mental health advocate, Jonny Benjamin,  said the news was grim but in line with suspicions. “Unfortunately, I’m not surprised by these figures,” he told Jewish News.

“I know so many people who are struggling during this lockdown in particular. I think this will continue for a while until we come out the other end, but in the meantime, there are so many people who need help and support. The mental health services can’t cope – they couldn’t cope before Covid.”

He added that “we need charities such as Jami more than ever” to fill the gaps in the mental health services’ provision.

“We need to focus on prevention and early intervention, which is what our recent mental health festival for schools did.”