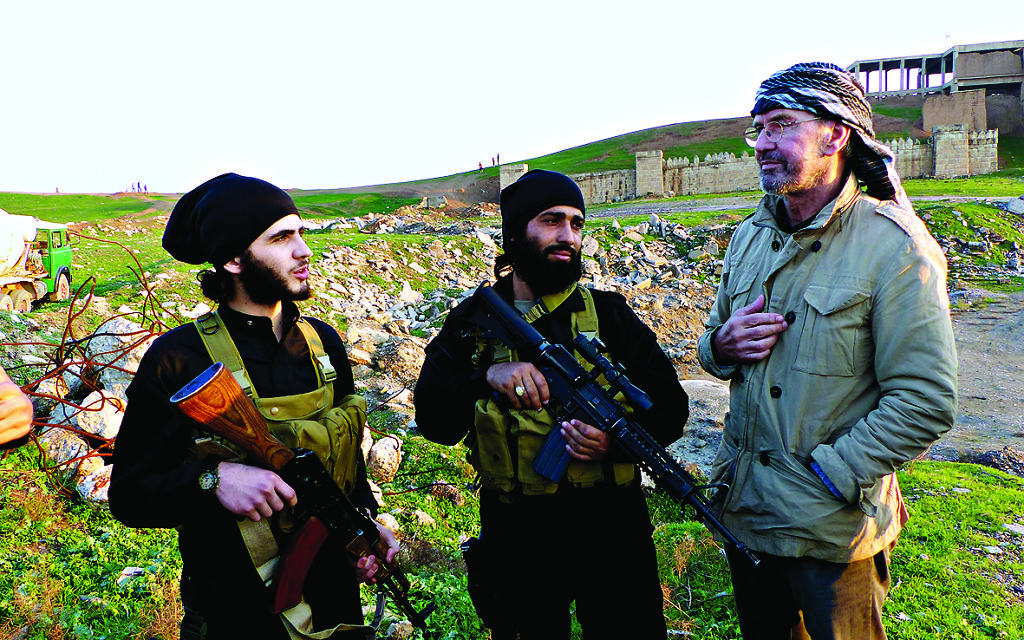 Jurgen with Islamic State fighters in Mosul, where he spent 10 days behind enermy lines. The German reporter says the terrorists view the capabilities of the IDF as a ‘real danger’ to their success

Israel is the one country in the world Islamic State fears, according to the only Western journalist allowed entry into territory controlled by the terror group.

The claim from German reporter Jürgen Todenhöfer, a former member of the German Parliament, came after he spent 10 extraordinary days behind enemy lines in Iraq and Syria, accompanied by his son Frederic. He returned saying the group behind the Paris attacks was “preparing the largest religious cleansing in history” and with a “pessimistic” view on what can be done to combat it.

But the author of My 10 Days in the Islamic State told Jewish News: “The only country ISIS fears is Israel. They told me they know the Israeli army is too strong for them.”

Jurgen with his son Frederic behind enemy lines

IS branded the co-ordinated attacks on the French capital that claimed 132 lives as “the first of the storm”.

Todenhofer claimed it is part of ISIS’ tactics to lure in Western boots on the ground and capture US and British soldiers. “They think they can defeat US and UK ground troops, who they say they have no experience in city guerrilla or terrorist strategies. But they know the Israelis are very tough as far as fighting against guerrillas and terrorists,” he said.

“They are not scared of the British and the Americans, they are scared of the Israelis and told me the Israeli army is the real danger. We can’t defeat them with our current strategy. These people [the IDF] can fight a guerrilla war.

“In Mosul there are 10,000 fighters living among 1.5 million people in 2,000 apartments, not in one place – so it would be difficult [for western soldiers] to fight them. ISIS fighters are ready to die in a war against a western soldiers.”

Last this month, in a video in Hebrew, the terror group warned that “not one Jew will be left in Jerusalem or around it. We will continue until we eradicate this disease from the world”.

But Todenhofer claimed: “IS considers its enemies to be all other religions beside IS Islam. They say Jews and Christians are accepted but must pay the Jizya, a special tax – something like 600 dollars per year. They told them they could stay in Raqqa and Mosul but more than 100,000 Christians preferred to leave.

In conversation with a German member of the terror group. He says: “I will never go back there”

“They kill all the Shia Muslims they can get their hands on. I asked them but if they were prepared to kill every Shia Muslim, and they scoffed: ‘150 million or 500 million, we don’t care, it’s only a technical problem for us. We are ready to do that.’”

Western Muslims who vote in democracies are seen as top-priority enemies, he added, as they give people rather than God the right to make laws.

The journalist – who had contact with ISIS supporters from the media department, judges, fighters and leaders – said the group wants to conquer all the Middle East – except Israel – in the first stage of its fight.

The second stage is conquering the West. “They are a very strong danger for Iraq, Syria, Jordan and Libya, while the West will be subjected to big acts of terrorism instead of a full blown ISIS war because they say they don’t want too many battles at the same time.”

Todenhöfer held Skype conversations for six months to seek guarantees of his safety should he make the trip. He said: “The only reason why I was allowed to go wasn’t because I had built up special relations with them. I asked journalists to come with me but nobody was prepared to go there. But I will never go back.”