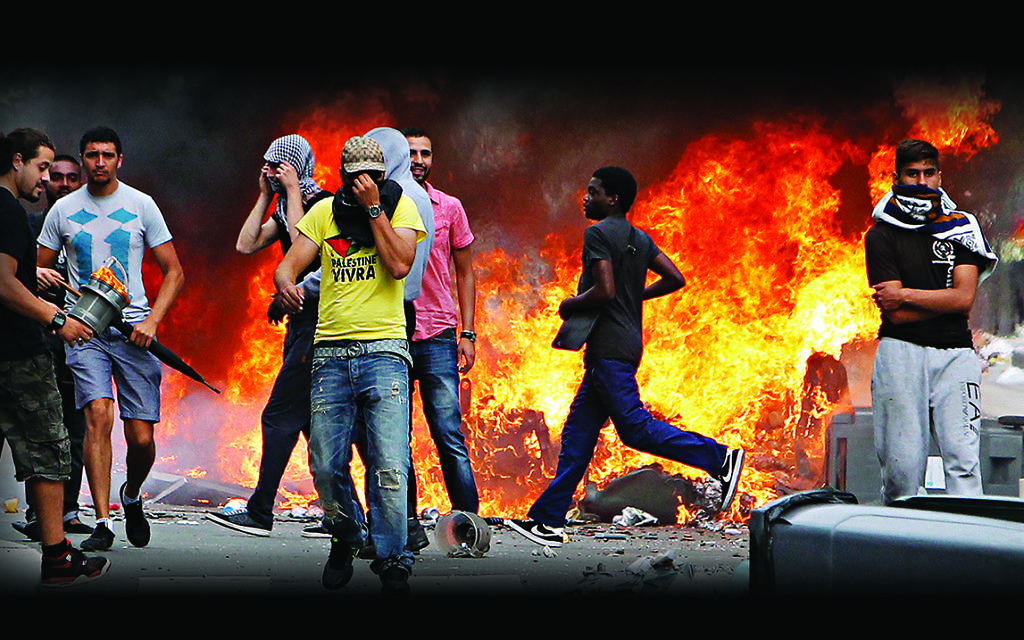 Rioters face riot police, following a pro-Palestinian demonstration, in Sarcelles, north of Paris, Sunday, July 20, 2014. French youth defying a ban on a protest against Israels Gaza offensive went on a rampage in a Paris suburb, setting fire to cars and garbage cans after a peaceful demonstration. (AP Photo/Thibault Camus)

Inside the Paris Jewish community targeted by riots and firebombs in the city’s most anti-Semitic neighbourhood, writes Lisa Sanders

French youth defying a ban on a protest against Israels Gaza offensive went on a rampage in a Paris suburb, setting fire to cars and garbage cans after a peaceful demonstration. (AP Photo/Thibault Camus)

Behind high steel walls in a part of Paris known as “Little Jerusalem” regular worshipers gather for the morning Shacharit service.

Armed police, complete with flak jackets, automatic weapons and body armour patrol outside. As the congregants put on tefillin and recite familiar prayers, they remain alert for signs of possible danger. This synagogue, Shaarei Rachamim, in Garges-Les-Gonesse, has been firebombed, burgled, targeted by rioters and its members attacked so many times it’s become the new normality.

Car burning outside Sarcelles shul in 2015

“We know we’re a target,” sighs Alain Bensimon, Shaarei Rachamim Synagogue president. “We now know the message of the Islamists and we know things cannot get any better.”

Two weeks ago, in the neighbouring suburb of Saint-Denis, a few minutes’ drive away from this synagogue, a hundred French police and soldiers carried out a huge raid on suspected Islamic State terrorists.

These suburbs, or banlieues of Paris, have long been considered a no-go area for the authorities. Gang crime is rife, shootings commonplace.

But in the 1950s and 1960s things were quieter and Jews from the former French colonies of Algeria, Tunisia and Morocco came and flourished. Soon they were Europe’s largest Jewish population. Jewish schools, delis and synagogues are plentiful. But now they are under siege, threatened and surrounded by a growing, angry, predominantly Muslim immigrant population.

“To be honest, nothing is different since the recent attacks. Last Shabbat was just a normal Shabbat. For us, everything changed in July 2014,” Bensimon explains. On Sunday 20 July – now referred to as the first Pogrom of 21st-century Europe – a pro-Palestinian demonstration started out from the local station, defying a ban by the local government. The crowds rapidly swelled to many hundreds of young men, openly shouting “slaughter the Jews”. Groups of youths set rubbish alight and burned cars. Six shops were looted, all but one belonging to Jewish owners.

The rioters then tried to break into the synagogue building, but were held back by the police. The neighbouring synagogue was not so lucky. Rioters succeeded in smashing windows with large rocks and the community paid £3,000 to repair the damages. Thirty rioters were arrested; a handful received prison sentences.

Bensimon sees these summer riots as the predictors of the catastrophes that would play out in the terror attacks at the offices of satirical magazine Charlie Hebdo and two days later, at Hyper Cacher in eastern Paris.

Yohan Cohen, 22, one of the four victims of the Hyper Cacher attack, killed while trying to wrestle gunman Amedy Coulibaly’s automatic weapon from him, was from Sarcelles, the neighbouring suburb to Garges.

Shaarei Rachamim has recently installed a new CCTV system, and the French government has declared special emergency measures for the area. With security now at its highest level, platoons of soldiers patrol the Jewish schools and stand guard outside synagogues.

“Yes, it’s necessary and it’s good,” says Bensimon. “But what happens when the state of high alert is reduced? Then the police will leave.”

Local deputy mayor Francois Pupponi said: “The Jewish community has realised people want to attack. There are soldiers everywhere. We carry out our professional duty but the scar remains.”

He has backed initiatives to monitor and prevent radicalisation and the municipality has tried to organise meetings between the community groups.

But for the Shaarei Rachamim synagogue members, it is too little too late. Bensimon says it is impossible to say how many families have emigrated to Israel in recent months, but he says there are noticeably fewer children in the Jewish schools, and fewer customers for the Kosher shops.

“Look,” he concludes. “Nothing has changed. Nobody talks about it. We are in the hands of God.”