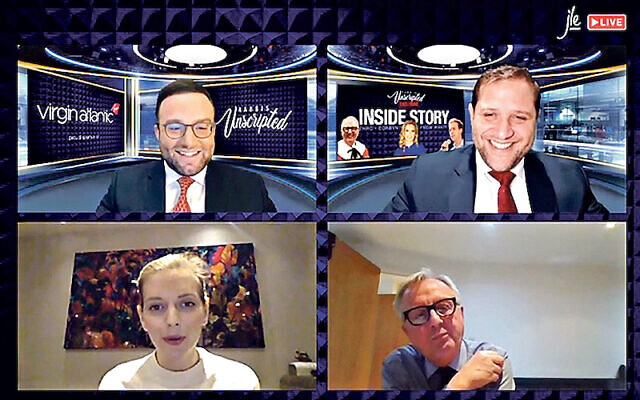 A JLE show featuring rabbis speaking to well-known names has attracted sponsorship from Virgin Atlantic that should see viewing figures continue to soar.

Rabbis Unscripted, the JLE’s online show hosted by Rabbi Benjy Morgan and Rabbi Dov Cowan, has attracted more than a million viewers since launching in April, with 100,000 views for the final episode of the last season.

“We have been thoroughly impressed with the level of professionalism of the Rabbis Unscripted show, the engaging style of the rabbis, the incredible number of viewers and the type of audience that it is catering to,” he said. “It became clear to us at Virgin that this was a perfect partner with which to broadcast our brand.”

There was also a special episode dedicated to the Equality and Human Rights Commission’s report on antisemitism in the Labour Party, and Jeremy Corbyn’s suspension then reinstatement, featuring Countdown presenter Rachel Riley and an emotional Lord (Ian) Austin, a former Labour MP.

Morgan said it was a “ground-breaking” to be the first Jewish educational centre to be sponsored from one of the world’s biggest airlines. “We’ve been overwhelmed by the response of thousands of people worldwide tuning in,” he said.

“It’s beyond the wildest dreams of the kind of reach we imagined when
we first launched the show as a response to Covid Lockdown back in April. The fact that Virgin Atlantic wanted to join with us is a mark of
how far the show has come and the potential it has for the future.”

Cowan said they decided to launch Rabbis Unscripted at the beginning of lockdown “to provide inspiration and a sense of community to Jews in the UK”, adding: “A recent highlight was the viral video, viewed 250,000 times, in which Mr Lapp from Borehamwood was surprised with a singing telegram at his doorstep.”

Future plans include live shows with inspirational guests from international venues, incorporating a post-Covid world of interaction with an online user experience.